And Someone Shall Lead Them Through. Possibly.

Share All sharing options for: And Someone Shall Lead Them Through. Possibly. 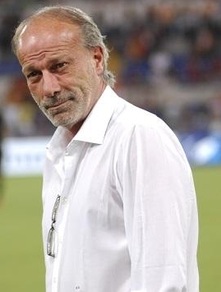 There's a lot to say about that game and what it says about Roma. None of it is a reflection of what everyone thought roughly two weeks ago.

93' Ibarbo's been more productive in the past 5 minutes than the entire Roman attack. Obviously it was set that way given the score, but still.

91' Cagliari clinch it. Ekdal. Ibarbo was fucking brilliant in getting by Juan and leaving Ekdal the tap-in.

And Miralem goes just wide. Brilliant free kick that was easily going in were it just a foot to the right.

87' Excellent free kick spot just outside the box for Roma. Pjanic is the new taker, yes....

85' And here he goes versus Kjaer.....and there's his chance on net, but he fluffs it. It may be smart to duck and cover for the remainder of this game.

83' Cagliari perfectly content with attacking with three. At most. They're just sitting numbers and begging for some possession football.

Although here comes Ibarbo, the counterattacking release threat. He gets one chance on net minimum.

82' And here comes the Cagliari late break after Bojan loses possession in the ball. Pinilla's attempting to waste time, while Angels is happy enough to remove him from the ball.

Erik off for Bojan, not a razor to be seen.

77' Gago's actually been throwing in some nice passes in the last ten or so minutes, but it seems like Dessena always has a beat on them somehow.

75' Totti finally has a moment in the sun, but he's been exceedingly poor today.

Pjanic into the channel in the box, and fires just wide. Excellent pass by Lady G.

72' Cossu giving the entire left side of Roma a lesson.

71' Astori currently playing fast and loose with remaining on the pitch.

69' Angel shakes and bakes Pisano (I think) brilliantly, then fires a cross twenty yards beyond the closest white shirt. Roma in miniature.

68' Borini heads wide. Glazed Sprinkles off, Greco on. And Luchio Gonzalez in Porto.

Borini yellow for tackling like a poacher. And it turns out, his previous shot was saved by Michele Agazzi's man marbles.

63' Borini played in with a tremendous ball by Lamela, only to be foiled by Cagliari's ghost of Marco Storari.

Kjaer wants a PK on the resulting corner. Astori had the majority of Simon's shirt in his hand.

62' Now Cagliari attacking like they know what they're doin'. How dare they. And Cossu just oozes class every single time he touches the ball.

Hey! Rosi does something! Cuts into the box on the end of a pass by Pjanic(?), flashes one across the six to Lamela, who couldn't tap it in. Well that was nice.

56' Pjanic gets cheeky with a lofty corner to Gago waiting to volley from behind the box. Excellent thought, just a rather difficult execution.

Simply Simplicio is fumbling all over the place. I blame Adriano's workout plan.

53' Francesco with his first quasi-remarkable pass of the day. It amounts to nothing after a deflected pass by Erik, but it's something.

51' Scrum in then Cagliari box now, a claim for a peno on Fabius (twas actually a foul on Agazzi after a handball on Simplicio - what a shit show), before Cagliari break the other way.

50' Both goals were extremely excellent, no doubt about that, but he shouldn't have been given the chance to score either.

And Conti hasn't even scored yet.

He was just placed too easily behind the Roman defense. Like candy from a baby.

47' Lamela hauled down, Astori with the yellow.

I will also say this: Roma's enjoyed a solid amount of luck in their goals starting the Cesena rout and also today. I guess Cagliari enjoyed some luck in the form of Roma not defending as well.

Cagliari was better - not terribly, but clearly, especially in midfield - and much of the blame rests with the man on the right - this defense is fucking abysmal.

42' Hey, matches against Cagliari are never, ever boring - so that's something.

Cagliari goal. Pinilla. Defense is just so, so easily torn apart and a great ball from Cossu finds him in the box after he beat Rosi for an outside-o-the-boot-chip. (Might've been an OG, actually.)

40' Totti and Lamela have combined to put in a half-performance.

37' Kjaer foul. Nothing malicious, but Heinze best get warming for his halftime substitution.

35' It's unthinkable for Roma to be winning, since Cagliari have been the better team - as Pinilla gets a great chance - but then are they really? Already tabulating Conti's goal?

A poacher's effort. Pjanic with a bomb on net and Borini simply ran in to bury the rebound like a true striker. Lightning quick acceleration to the ball. Osvaldo, take a seat.

(A bit of luck on Juan's goal, by the by. Canini was marking him but slipped, allowing J-Smooth the free header.)

32' Woeful pass by Francesco results in a counter and Kjaer earning a yellow.

Anyone for a wager on the minute of his inevitable sending off? Anyone?

30' Cagliari really seem to be focusing on attacking their right/Roma's left. And Ribeiro is gifted another great chance but this one closed down a little better than the last.

28' Conti bundles Lamela. That's it, he needs to be taken out.

26' And mind, the midfield and front seem to be into the game, but the defense just seemed to be taking an approach which is far too casual. At least until being called into the attack.

23' Dessena flubs a header from near the spot in the box, Maaarten is not called into duty.

20' Seven blue/red shirts, two white shirts in the attack. That's not going to do much.

18' Tis a bit unfortunate to see players like Pizarro and Borriello, who, for all their faults, never gave less than 100% on the pitch, dumped only to now see things like Ribeiro given target practice and Dessena winning balls so easily inside the Roman box.

17' Nothing comes of the corner, but it's plainly evident which team is planning to do more work today.

15' Angels gets flat roasted and outworked by Dessena when Roma should've cleared possession rather easily. Today is not reflecting well on the defense's ability to give a shit. Now a corner for Cagliari.

And I come back in time to find Juan scoring a header off a corner. That'll do.

8' Obviously, Ribeiro had more opportunity than really necessary. I blame...well, I blame a lot of people. But the defense is less than convincing as a (w)hole.

That was a fucking bullet. Not sure Maaaaarten had a chance.

6' Wow. Out of absolutely nowhere, it's a Cagliari goal NOT SCORED BY DANIELE CONTI.

Which means Roma's now -2 in the hole, given Conti's inevitable contribution to the scoresheet.

4' Borini appears to be starting on the left and Lamela on the right. Does it even matter on the rotating top line?

3' Roma's attempting to set up base camp in the Cagliari half.

1' The pregame lineups on the stream had Larrivey in the XI, and all I could think is that he's the type of player who only has a career because Serie A exists.

My stream just opened up to Saba walking across the pitch, cigarette in hand. Good juju? Or best juju?

Of note: I plan to spend much of this game baffled by the winter mercato. Because I'm pretty sure another tweener at fullback isn't the answer for a team so easily picked apart at the back. Of course, maybe it's just letting Kjaer run out his cobwebs each week. If he can, one would assume.

Streaming is criminally thin today, unfortunately. I seem to recall this being a pattern with games at the Sant'Elia. Perhaps it's a gift to Roma fans who want Matteo Ferrari to die a slow and painful death?

In theory, that should be Roma's best defense.

Why the hell not?

First, the most surprising news of the last 24-48h: Lucho Gonzalez snuck away from Marseille for somewhere in the range of 0-2m euros. (UEFA says it's a free, FIFA says €2m. Either way, it's a bargain.) After all the effort they put in during the summer, DDR unsigned and Lady G merely on loan? Something seems amiss.

Next most surprising news: David Pizarro and Marco Borriello made it out of Rome while Luis Enrique remained with his life. (I think. Has anyone done a welfare check on Luis in the last sixish hours?)

Also of note: both deemed useless by Enrique, yet both were handed spots in a title race. Granted, they may make as much of an impression on their respective benches as they did in Rome...

Now, Marquinho...is it so wrong to be skeptical of South American talents who don't make it to Europe before their 25th birthday? Is that what's become of the great rape and pillage of South American football? (The little I've seen of him seems exactly what I imagine Aleandro Rosi would look like in Brazil, but on the left side. To the point that it's eerie.)

Actually, go ahead and name a Brazilian star in Europe who crossed the seas after their 25th. [Insert Jeopardy theme music here.] Not that he need be a star, but it's a fun little brain teaser. (First inclination was Maicon, but he was only 22. Dude needs some plastic surgery.)

Fuck off and die, Daniele Conti.

Serious note: testing, once again, how well Roma does against a side which can sit numbers and blitz the counter. And this time likely with Ibarbo, who's not quite as useless as I thought him to be, from the off.

I realized the actual formation long ago, I just couldn't in good conscience plant a 35yo Totti on the wing.

They could really use a pint-sized Chilean in midfield and a hard-working Italian prima punta right about now. (Ahem.) What with having no faith in Enrique's ability to write Borini's name over Bojan's consistently at the moment.