Share All sharing options for: Ignorance Is Truly Bliss 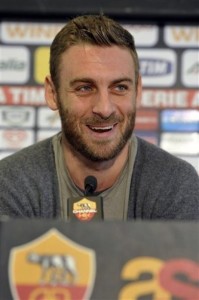 Quite the delightful week to be a Roma fan, isn't it? In fact, one things just gets better than the next. Daniele's contract signing was far better than the game, with the news his hand couldn't be taken by a gift of several mooing farm animals the next day.

Furthermore, the game against Catania - all coffee break's worth - was some of the worst, most excellent football we'll see this season, if only because it was like watching bumper cars run on full throttle with the occasional turbo burst. Or whatever stimulant footballers are using to get an undetected edge these days.
(Hey, Carrozzieri's back, right?)

The subject of Igli Tare brought up, Luis replies with great and seemingly genuine confusion..."who?"

They could lose every game for the rest of the season before his canning, and this alone would make his whole Roma career worthwhile. Though one game in particular would probably prove necessary for actions to trump words.

He was never leaving. Ever. Got it? Never. I mean, it's not like I was wearing layers of rosaries like an exhibitionist at Mardi Gras for the last six months or anything...

At some stage, however, this feels a bit like too much of a celebratory sigh of relief. Or like we never could've imagined it to be a celebration - rather the enjoyment of an absolute inevitability. Two years ago, regardless of any massive changes on the letterhead, would you dare envision a scenario where Daniele De Rossi was free to sign with any team without compensation in the form of beaucoup euros or the exclusive rights to oxygen? Never. Never, ever.

Incredibly, that's what I take most from this whole situation - the surreality of it all. The unrecognizable bent of panic when it comes to one of the two homegrown icons hanging from the very threads of the shirt and the collective cloud of anxiety wafting away.

Nothing detracts, nothing was wrong, nobody really messed up - ownership transition in times when key contracts are dwindling can have significant effects on personnel turnover (see: Mexes, Philippe) - more simply the odd feeling of never expecting Daniele De Rossi to feel like a new signing.

However, there could obviously be none greater.