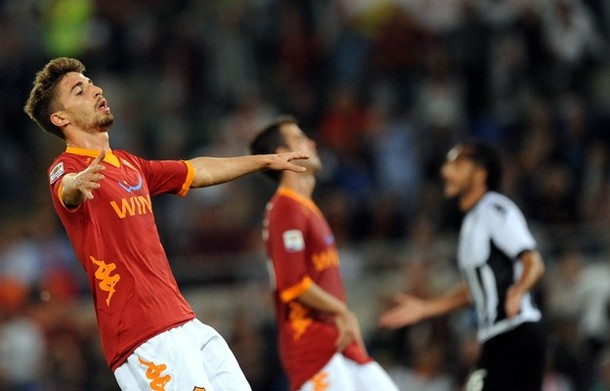 So, you know...thanks. Enjoy Serie B for the next 55 years as payback.

Osvaldo's back. I know there is a consistent undertone of "Please don't get pee tested." surrounding him anyway, but having bounced back this quickly, those fears are increased dramatically. Maybe threat level Hazy Purple transitions to Pink Slip?

With Daniele and 'Nando gone, the midfield is, well - the midfield is going to look like the B team from an intrasquad practice game, possibly with a few injuries thrown in as well. But at least they've yet to have to bring Ahmed Barusso back from loan - so there is that.

Here's what's going to happen: Roma's going to press, Siena's going to sit back and attempt to counter, and depending on which side decides to show up on the day, one might win...

Isn't this fun? It's like the Spalletti years of knowing exactly what's going to be attempted going into the game, but with none of the characters and fun of pondering who's going to give a shit.

Basically, DDR and Pjanic are sure things, Gago's good occasionally, and Simplicio and Greco are looking up at productivity and Viviani is still firmly 'unknown quantity'. With Pjanic the only one available, this might be sandpaper-esque.