It should be noted the photo system on this new platform is rather excellent, which is why you're about to get a lot of photos like Osvaldo's moobs being cupped and Luis Enrique losing his marbles in front of his imaginary gnome friend named Olaf XVI.

I've always wondered what they're doing on that tablet on the sidelines. My top speculation involves either face chatting with 12 year olds in Argentina - ... - or using the Italian edition of Wikipedia for the characteristics of the opposition.

Possibly, however, it's slightly complex than anything which can be edited real-time or will inevitably force Walter Sabatini to do real time. (Tactical analysis, video, etc.) Though the sport isn't quite receptive to statistical analysis yet, missing such requisite concepts as giving a @#$% or complete dorkery, I thought I'd fly through what little statistics I could find.

Nothing happened, obviously. Or: business as usual.

Goals conceded with Kjaer on the pitch: 10

Percentage of goals conceded with Simon on the pitch: 37

Bojan minutes per goal: Stop it.

PDO mins per goal since November: 215

Borini mins per goal since November: 112

Bojan mins per goal since November: A better option would be seppuku.

Most minutes without a card: 1285, Angels. Which would be mildly impressive if he ever defended.

This was brought to attention way back on the other side. Apart from Rodrigo Taddei's utterly perfect bone structure, see if you notice anything: 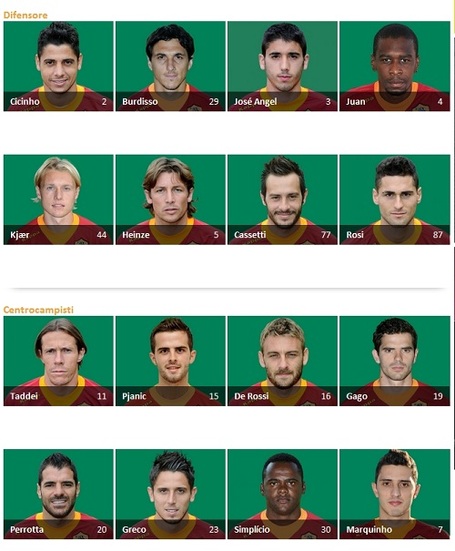 Why yes, that's Fabio Simplicio positively drenched from the strain of being photographed.

Every team needs a token overweight Brazilian. It really just pulls it all together.