Hole In The Heart

Share All sharing options for: Hole In The Heart 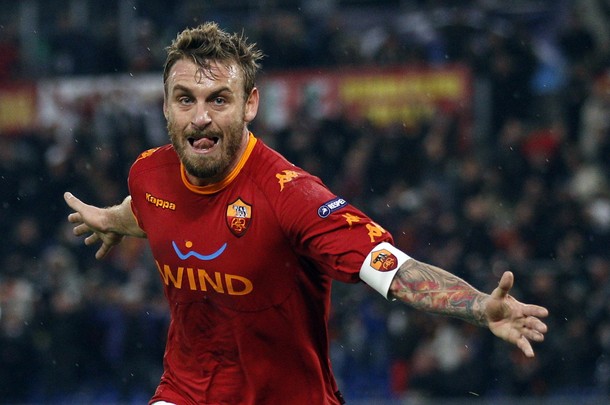 The game against Inter has been pushed sixish hours to 1500 local now to Sunday at 1500 due to the potential of fluffy white shit. Bring gloves and a SpongeBob sled.

Seriously though - Totti and Perrotta may show up in ski masks. And will the Danish Disaster wear long sleeves?

The subplots are delectable.

Everyone Wants To Be Daniele De Rossi's Agent

There's only one real main headline to Cagliari...

Daniele De Rossi deserved a blank check in July of last year. At this point, I'm not sure what you could toss on top of that, outside of maybe a personal leprechaun riding a fucking unicorn which spits out hot fudge sundaes.

It's now February 3rd and Daniele De Rossi is free to sign with any team on the planet. Worse, it's plainly evident he is the only thing keeping this midfield from being overrun by a team comprised of 12 year old paraplegics. (That's not true - I bet Perrotta could do a damn decent job in that deep DM/CB3 position. But Enrique would probably prefer to send out Simone's unborn children in a cup.)

Much is said in the press. I believe little of what I read, less of what's said. Maybe he wants a clause, maybe he doesn't. What's for sure is they are playing with fire in one hand and a vat of gasoline aside the other.

Each game, his position strengthens.

- This defense as a collective needs a short walk off a shorter plank. Granted losing Nico was a shattering blow, but I'm fairly sure the best current showing involves Juan, Heinze and Sexyface at both fullback spots.

I'm still baffled nothing at all - an attacking winger who can possibly convert doesn't get my blood pumping - occurred during the window. It's as though they only watch match tape of the midfield on forward. (Which would explain a tremendous amount...)

- Fullback is arguably the thinnest outfield position in the sport, yet I still have a hard time believing Rosi is the answer to anything but a question of "Name one of the problems with Simon Kjaer's unthinkable self-destruction..."

- Again...Rodrigo Taddei. Every. Single. Game. It'd be one thing if Jose Angel appears to be remotely close to being ready for the Serie A switch, but frankly, he doesn't. He'd have been better off starting for Cagliari on loan than against them.

Someone should check the average age of starting Serie A defenders. I'll bet it's roughly 47 for a reason.

I've got nothin'. Maybe he should play along the righthand touchline less often? That'd be a start. (A rather big one.)

- Fabio Borini. I love him. His instincts to find the ball with that burst of acceleration at the age of twenty? Twenty. Osvaldo's injury might just turn out to be a blessing in disguise for his development.

-It seems a bit obvious to say that they have no replacement for De Rossi in-house - and I'm talking on a game-to-game basis before considering the previously unthinkable - which means that perhaps it'd be wise to have a set of backup tactics in the event that Daniele can't rescue the day. Particularly since being able to sign the type of players Roma covets to further their brand development would require a decent showing in the league this year. They're alright where things stand, but this whole "second time around" bit hasn't begun too well. It would seem Luis' number is there to take after seeing his methods once 'round.

Now, name a tactician who would love nothing more than to sit and absorb for ninety while relying on the quick burst of the counter to gain the odd goal or two...

I can't quite think of one.