Share All sharing options for: The Nonstandard, Untimely Season Preview

When I'm officially King of Everything, the season will begin after the transfer window, when fair's fair, and also, people who dress their pets will be guillotined in pink tutus while Maroon 5 segues them into hell. This is my platform. Run with me.

In truth, the team is not worthy of assessment until the last sand tumbles out on August 31st and Roma has bought its 45th goalkeeper, confusing the living hell out of everybody. Only then is the window closed and previews can be done. And also after one's had two games with which to cheat and spy and 'Nanner, nanner - told you so.'

This will have neither rhyme nor reason nor structure, so unless you're new here, well...par for the course.

There are a great many issues here, but none so large as the absence of a blonde, tattooed central defender. And Marquinhos falling head first into a pair of Fiskars doesn't count.

Me, myself and others half-expected Simon Kjaer (well, I two-third's expected him) back in Rome at the eleventh hour for twelve cashews and a restraining order against Luis Enrique. (Actual commentary. Listen.) That didn't happen, so now the most talented blonde, tattooed defender from somewhere north of Rome is completely gone, gone, gone. Until January, at which point they'll reassess Kjaer, because, well...

Have you seen the central defense depth chart? The only thing which could make it passable to the eye is an Instagram filter (hipster vintage) and a translation to the braille I can't read. Bump. Bump bump.

Ignoring the fact that the undisputed #1 is coming off reconstructive knee surgery and is a walking 30-year sentence with no chance for parole, this is less than optimal. Castan seems solid, his positioning a bit off to start but hopefully will improve with time and Rosetta Stone. And, well...that's sort of it. The latter two have a combined six games of top-flight experience, all of which took place in Brazil. And, oh yeah: Zdenek Zeman.

Federico Balzaretti's a living legend for putting on a Roma shirt alone, and at some point we're all going to have to accept that Rodrigo Taddei is the genital herpes of AS Roma: no matter what, he always makes it back. He's going to be the right back eventually, because he's going to win a position on this team one way or another. Deal with it. He's coming back and there's nothing you can do to stop it.

Nothing to say, really - just needed to bring that full circle.

You were pursued by Manchester United to replace Edwin van der Saar. You've played in a World Cup final and are the undisputed #1 for one of the world's top nations. You're a top 10 keeper in the world. You were snapped up by Roma with no doubt as to your role for a decent amount of change with your contract running up. You came from the famed Ajax academy, where goalkeepers learned distribution and technical work above such bullshit as "saving goals" and "doing goalkeeper stuff." An attack-minded coach comes in after a status quo-minded coach exits. His game is longitudinally progressive. It's your bread'n'butter.

And on the final day of the window, they spend 400k on a keeper whose YouTube distribution highlight video requires a credit card and the shades drawn, brought in at the personal request of the chain-smoking Bohemian who decides your life.

Oh, and the hero from 2009-10 is back, if he's been stuffed in the back to work on the perm he sports when at the end of the line. But there's also Bogdan Lobont, who is - and this is completely objective - a decent shot between the sticks away from the Ballon d'Or in a club where they can hide "goals conceded" behind "How the @#$% did he just save that?"-worthy commentary.

One spot, four men, 8700 languages spoken. Hugs and Esperanto. That's what they need.

I can't stress this enough: he needs to play. A lot. All the time. He is, simply put, the most talented attacker on this club since Antonio Cassano's milk muffins left town.

As you well know, I do these things - my entire life, really - essentially 'stream of consciousness' and...."Antonio Cassano's milk muffins" is a lot more distracting than I expected to be. Also: potential name for a blog. (Yours gratis.)

He is going to score a lot of goals under Zeman. A lot. Half of them are going to be complete bullshit, complete luck-pulled-out-of-his-underpants; the other half will be unfrickenbelievablyspectacular, and grown men will be throwing their underwear at the television screen. There is no middle ground here.

Just as predicted in the midfield portion of the more standard preview, Alessandro Florenzi is going to play tons of minutes and score lots of goals and that spot in the midfield is his if he wants it so shutupaboutitalready. (The link has mysteriously vanished so you'll just have to trust me on this.)

What the midfield needs, more than anything, is an infographic representation of minutes games/played, updated weekly, with pretty colors, because pretty colors are important. Those pretty colors will highlight what should be an obscene amount of parity in the midfield, with it closer to musical chairs outside of Oh Bearded One than we expected in the summer. This will likely also mean lots and lots of Miralem Pjanic rumors, and some nightly phone calls to Enrique in which he blubbers before passing the phone to Gabriel Heinze, next to him on the couch. (No commentary there. None. Nope.)

They will run a lot. They will be found in places one wasn't expecting them. They'll be random. They'll just...do things. Traditionalists and adults will be highly annoyed.

In essence, they'll be an unmedicated ADHD demographic. And it will be @#$%ing brilliant.

A bit of an odd switch, this. Two "names," of sorts; once cultured at Chelsea, the other at Barcelona, for Mattia Destro, something of a name, something more of a terrible decision-maker in the grooming realm, and Nico Lopez who, well....Rodrigo can finally understand James Blunt now. But they can run. And they can finish. And that sounds a lot like Borini. And Bojan a bit too. And what this means is they value both Destro and Nico over BoBo. Cue Bojan Face. 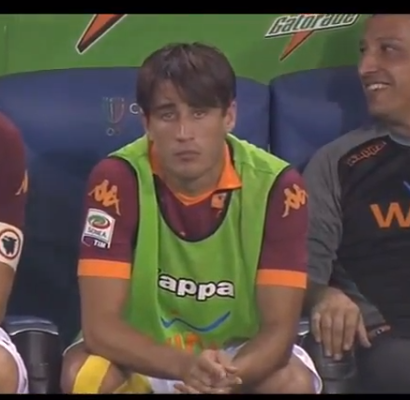 And Who Are You Again?

Several comments flew regarding Simone Perrotta's incredible coach's posture last season, standing on the sideline with a seasoned look even Ottmar Hitzfeld himself would bask in reverence. Which is probably a good thing, because he's bound to get as much playing time as the coaches this season.

Of all the exits this summer, such a mass exodus my head is still spinning, his is the most unceremonious, because he's still here. Just, you know, hangin' out and everything, not playing, only to be thrust onto the pitch when five of the seven midfielders in front of him aren't being allowed their playtime for one reason or another.

At least it allows us the opportunity to fantasize: a 28 year old Perrotta under Zeman would be the Sphinx's silk jammies.

This Is Important: Neck Tattoos

And so we would like to know where our next fix is coming from. Most likely replacement candidate:

Otherwise it's Destro for the following reasons:

(Oh dear, this could get ugly.)

Position: Scudetto so long as Zeman shuts up and stops talking noise about people who oversee this league of complete transparency and fairness.

Coppa Italia: Cup competitions typically require some degree of game-to-game consistency beyond "I think eleven men just had a simultaneous seizure on a pitch for ninety minutes." Out in the semis on a slalom by David Pizarro.

Most Pablos (one goal, one assist, one red card): Pablo.

Most Distressing Summer Loss: Fabio Simplicio. The delight of watching the officials checking the rulebook to see whether or not he can sub in while wearing an O2 mask is a dream we'll never see realized.

Most Reasons For Contributions To The Bottom Line Of Pharmaceutical Companies: Pablo Zeman's illegitimate lovechild.

The Cicinho Twelve-Step Award: Julio Sergio. Nothin' better to do.

The Annual Julio Baptista Touch-Of-A-Down-Pillow Award: Julio Baptista. Still. What the hell was that? Wrap your feet in some double-ply or something.

Surprise Inclusion Of An STD Award aka The Marco Borriello Award: Nico Lopez. Is the word 'concubine' still Bible-exclusive?

The Hey-Remember-When-We-Were-Excited-About-You-Oh-Hey-It's-November-And-You're-Still-Here-Award: Marquinho. (The dude who skiffs wide right every. single. time. Not the other one.) He could score 20 this year or he could play 20 minutes total in October. Flip a coin?

Everybody's Favorite Player In December Award: Taxi. This may be the most inevitable of them all. He's young, he's big, he's talented, he's raw enough that the flashes of talent looks amplified against his follies and he's got a mean streak. Show me a more perfect fan favorite - I dare you.

The Lung Cancer Award: TBD. Please Lord, tell me someone started a tally on Saba v Zeman: The 2012-13 Cigarette Count from kickoff against Catania. Or have mathematics not advanced far enough to count that high yet? (Details.)

The Annual Mancini/Jeremy Menez/Mirko Vucinic Give-A-Shit Award: Dude on the end of the bench. 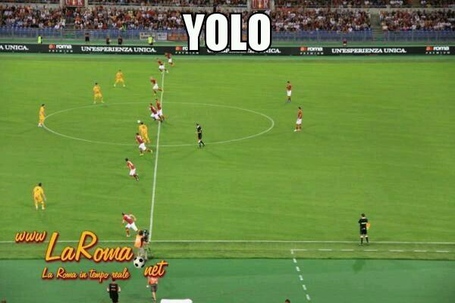 We joke, but we could all use a little bit more Zeman in our lives. He is part tactician, part philosopher, and we would all be better served following him by grabbing a cigarette, grabbing life by the throat and becoming...Zemanlandia.