AS Roma Hall of Fame Class of 2012 Announced

Share All sharing options for: AS Roma Hall of Fame Class of 2012 Announced 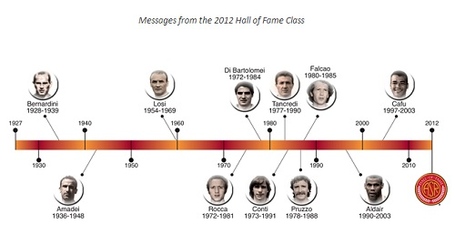 Fan voting isn't my favorite - democracy?...nonsense - because, well, every people's choice awards ever. Oh, and I'm from the generation which will associate the "mass public" with YouTube comment sections. Clearly one person should deem themselves as High Chieftain and decide everything. This is the only way.

But the power still belongs to the people, and the people were tasked with selecting Roma's Hall of Fame class for this year - and the inaugural HOF class. Hence the big names. (It's bound to get a lot less impressive real soon.) Those selected are above.

Details of the ceremony are below.

The Hall of Fame and the 7 October celebrations – Devised as a means of preserving the memory of a group of élite athletes, Associazione Sportiva Roma’s Hall of Fame will be unveiled to the public on Sunday 7 October 2012 before Roma v Atalanta, Week 7 of Serie A 2012/13 (kick-off 12:30 PM). The ceremony begins at 11:00 AM and will bring to a close the process which began on 20 June with the naming of the 85 candidates, subsequently reduced to 55 by the panel.

There are no words for this lack of foresight.