Michael Bradley Under the Microscope

Using some recent data, we take a look at the performance of Michael Bradley, who has become a somewhat controversial figure in Roman circles, to take a look at what has and hasn't gone right.

Share All sharing options for: Michael Bradley Under the Microscope

We've spent some time here at CdT comparing various players, most notably Destro v PDO and our Great Goalkeeper Debate, while not a direct comparison of two players, next up we're going to examine Michael Bradley: the good, the bad, and the ugly, the latter of which mostly pertains to hairstyle, or the lack thereof.

Again, much like our prior pieces in this series, a few caveats:

1. As both a Roma and U.S. Soccer fan, I obviously like Bradley and think he brings a lot to the table for club and country.

2. Because of that, I have become the defacto Bradley defender among the CdT crew

3. This is merely a look at a somewhat controversial player, not a comparison to anyone else on the squad. This debate is all Bradley.

This analysis will employ the tried and true Stewie Griffin method, the compliment sandwich. We'll take a look at what he does well, where he falters, and what we can/should expect from him going forward.

Before we put Bradley in the crosshairs, let's look at how and why this debate came into existence.

For more on what Bradley's presence in Rome means for the club, project and U.S. Soccer, feel free to (re)read my opus from this past July. We'll keep this piece purely focused on the pitch, but the extension of the Roma brand in America is only in its infancy, so don't be surprised if they exploit Bradley to that end even further going forward.

Okay, now that is out of the way, what's all the fuss about?

I don't think many fans, even those who don't claim to be Bradley supporters, would say he's a bad player; the issue is simply the extent and manner in which he's featured in Zeman's plans this season. Quite frankly, had you told me back in July that Bradley would be a week-in-week-out 90 minute player, I would've been pleasantly surprised, albeit shocked. While he was never brought here to ride the pine, he had the makings of a 30-40 minute player, at least in the early goings. But he clearly has Zeman's faith, so he must be doing something right.

So, with that in mind, let's take a bite out of this compliment sandwich.

What has he done well?

The good folks at who scored have Bradley ranked as Roma's 8th most effective player, ahead of Alessandro Florenzi, Federico Balzaretti and Daniele De Rossi, among those who have logged significant minutes.

Looking at the other numbers, Bradley's raw passing numbers have been particularly strong. The Bald Beauty is completing 87% of his passes, good for 4th on the team (minimum 13 appearances), averaging nearly 48 passes per game and 16 meters per pass. Bradley has notched 11 key passes, 90% of which have come (surprisingly) in the final third, while 72% of his passes are forward in nature. Beyond simple passing, Bradley has just one goal and one assist, though his 14 successful dribbles are sixth on the squad

Defensively speaking, Bradley's 1.9 tackles per game are 8th on the squad, 2nd among midfielders, behind only Panagiotis Tachtsidis' 2.3. In terms of interceptions and clearances, he ranks 4th among midfielders, behind Daniele De Rossi, Alessandro Florenzi and Tachtsidis in varying order, though he has played significantly more minutes than DDR and Copy and Paste, so one should reasonably expect his per game numbers to suffer slightly, given his larger sample size.

But this debate isn't purely about statistics, it's more about his performance and placement within the broader tactical framework. Since this is the positive portion of the compliment sandwich, let's take a look at a heat map from the 4-2 over Fiorentina, one of his finer performances of the season. 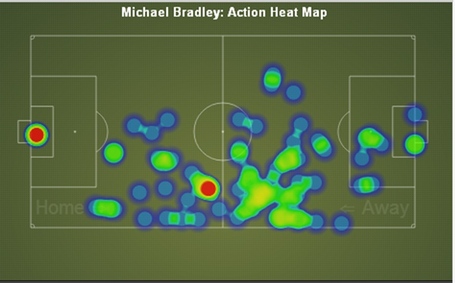 As you can see, in this particular match, the bulk of Bradley's time was spent on the right hand side of the pitch (17.8%), between midfield and the 18 yard box. Interestingly enough, Bradley's passing this match wasn't that great (78%), as his accuracy failed him as he approached the 18 yard box (more on that next). But you can see just how much ground he covers box-to-box and even laterally across the pitch; it's pretty impressive, Bradley will never lack in stamina or effort.

The Palermo victory was another strong performance for Bradley. In this particular match, Bradley played a bit of a deeper role, as 25% of his action occurred in and around the half way line, again largely on the right side. In this match he completed 83% of his passes, though 1/3 of his incomplete passes occurred in the final third...noticing a theme? 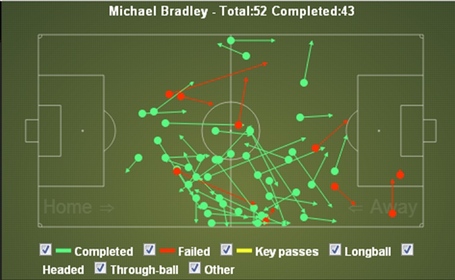 So what these numbers and graphics tell us is pretty much what we expected going in, he does several things very well, but no single thing fantastically. Taking it a step further, what he does well, he does best from box-to-box, when he falters, it's often in the latter third-which is really the crux of the debate, particularly in the wake of Sunday's Inter match, what is Bradley's proper role: attacking, holding or defending? Is the sheer amount of ground he covers an asset or an exposition of his tactical flaws?

Bringing us to our next point, the negative part of the compliment sandwich.

Where Does He Go Wrong?

While admittedly a small sample size, the numbers and graphics we just looked at show that, while his passing numbers across the board are strong, his accuracy wanes in the forward reaches of the attack. Passing numbers are obviously subject to many factors (quality of teammates runs/spacing, the amount of pressure applied by the defense, pitch conditions etc), but so are heat maps (quality of one's own teammates runs/spacing, formation, formation of opponent etc).

Point being, the stats available aren't perfect, but the general theme we see does appear to have validity, Bradley's precision, or lack thereof, falters in the latter third, which is obviously a problem when he spends an inordinate amount of time up there. But again, is that his own doing or is he being instructed to forge ahead when the opportunity presents itself?

As Chris alluded to in Sunday's post-match wrap up, Bradley's supposed failings largely rest within the decisions he makes or space he occupies within the broader tactical framework. Quite simply, when he bombs forward, DDR and Florenzi have to pinch in to fill the vacated space. Complicating matters further, due to his movement forward, he isn't able to track back quickly enough, and the suddenly two man midfield is spread thin, which allowed Inter to flush the ball right, which then shifted the midfield, allowing Inter to switch play to the opposite side, leaving acres of space for Inter to run at an isolated Ivan Piris.

In other words, his extreme forward runs opens up a ton of space in the middle of the park, causing the remaining midfielders to be overextended and enabling the opponent to switch play to the weakk side, thus exposing the fullbacks. While this is rather elementary and true of any midfielder, Bradley hasn't been efficient or effective in the final third, so there hasn't been much payoff for those runs. Bradley's proper role should be to pressure the opposing midfielders, not defenders.

Let's take a look at that match and see what he did half-to-half:

Bradley's 1st half v Inter, below 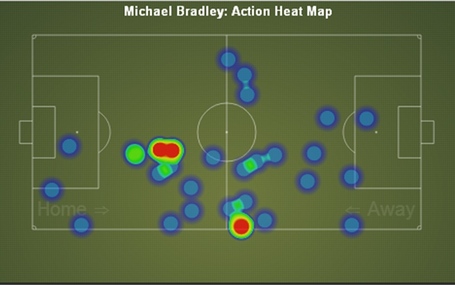 (Bradley's 2nd half v Inter, below) 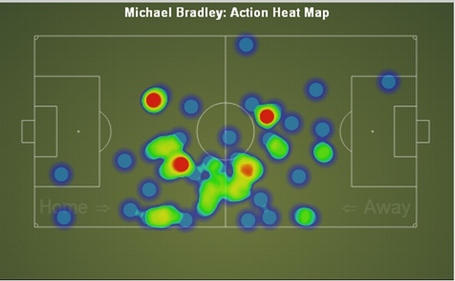 So the question you have to ask is, why, on matches like Sunday's, is he attacking so far up the pitch?

Is it simple impatience? Is he compensating for someone else's laziness or ineptitude? Was he instructed by Zeman to do so?

Given that he is the son of well-regarded coach, you have to imagine he has an innate respect for the position, so I highly doubt he's going AWOL and doing as he pleases. Given the disparity between his first and second half performances, in terms of where he was on the field, it seems more likely he was instructed to do so; perhaps Zeman didn't like what he was seeing from the other midfielders or forwards in the first half of that game and told Michael to seize the day and charge into any channel that might open up.

It's hard to say, but given the admittedly limited data, Bradley's best performances have come when he's patrolled the box-to-box area, but lagged behind when he pressed high up the pitch, mostly due to errant passing in the final third, though he certainly has the will, size, and necessary athleticism to get past most defenders, so he does present value to Zeman's attack.

So putting the last layer on the compliment sandwich, let's close with some positives.

Bradley has a ceaseless engine; he can run for days and is more than capable of covering the whole of the midfield. Bradley's passing accuracy is outstanding, his tackling numbers are solid, his dribbling numbers are quite surprising (3rd on the team among midfielders) and he is careful with the ball, ranking 3rd or 4th on the team in terms of fewest turnovers and dispossessions.

Bradley wasn't brought to Rome to ignite the offense; he was brought in for his strength, stamina, tenacity, knowledge of the game and his vast skill set. Successful teams need players like Bradley, as much as we'd love to see it, a team of ten Tottis might not be as flawless as you'd imagine, you need someone to do the dirty work. Besides, if you believe this piece, Italy features very few number 10s nowadays, so Zeman's utilization of Bradley, though not optimal, might not be an anomaly.

While he is fully capable of powerful runs into the 18 yard box, his playmaking in that area has generally suffered this season. Bradley is a box-to-box, jack of all trades midfielder with a solid feel for the passing game, a nose for the ball, boundless energy and is solid in possession. So how you view Bradley largely depends on your expectations of him and the extent to which he determines his own role. He may never be DeRossi or Michael Essien, but are his faults his own or the result of Zeman's tactical decisions? Barring a replacement in the lineup, we may not get an answer to that.

Going forward, I would expect his role and level of participation to remain the same, especially now that DDR is out two weeks. With Panagiotis Tachtsidis being used intermittently, Zeman has seemingly decided upon Florenzi and Bradley as his two default starters, with the third being a rotation between De Rossi, Pjanic and Tachtsidis. No matter the chosen trio, Bradley should fulfill the box-to-box role, as his best performances have come in that role, again I'd caution about the small sample size, multiple seasons of data would be ideal to make any determination.

So while fans may argue about his true value and proper role, his place in the squad seems secure, as his commitment and versatility seems to have earned the trust and a freedom to operate from Zeman. Plus, if we're being honest, Zeman wants all his players to go forward, doesn't he?

The bottom line is, Bradley will always receive sharp criticism simply because he and the clubs owners happened to be born in the same former British colony, fair or not, that's just the way it is. But if you view Bradley for what he is, a talented cog in a much larger machine, then you have to be pleased with the results thus far-he is tackling, passing and protecting the ball as advertised.

Bradley is not a franchise player; he has a valuable, albeit hard to qualify, skill set that all teams require. He will rarely be the reason Roma win, but he'll seldom be the reason they lose.

*All graphics courtesy of Squawka*