With a rash of injuries, an uncertain future, and an opponent that staunchly defends its own ground, Roma is facing a trio of foes this week in Udine. In order to survive life sans Totti, Rudi Garcia will need to defeat each of those adversaries.

I can't say I planned it like this, but yesterday's dissection of Miralem Pjanic is looking pretty fortuitous, as he figures to feature prominently in Sunday's Totti-Less lineup. Without two of his top scorers and facing an always tough away fixture to Udinese, Rudi Garcia better bring his managerial A game to the Stadio Friuli.

With three games in seven days, there's no time to dwell on what's missing. Rudi Garcia must channel his inner Siddhartha, freeing himself from desire and discovering his own eightfold path to success without Francesco Totti. Even the loss of Gervinho will test Garcia's inner calm; between the two of them, Roma is suddenly down six goals, seven assists, and a lot of forehead.

Before we delve into how Garcia plans to amend his Roma constitution, let's dispense with the Udinese talk.

With a club leading three goals, Antonio Di Natale is up to his usual tricks, while the rest of the club is just typical. As in average, not special, run of the mill.

Beyond some guy named Allan (in-depth research), none of the Little Zebras have separated themselves from the pack....herd? What's a group of Zebras called? Give me a second, I'll be back...Harems!? You gotta be kidding me; I wonder how the lady Zebras feel about that term.

Anyway, back to sports.

They just haven't really managed to distinguish themselves in any fashion, but that's what happens when one man accounts for 28% of your shots and 33% of your goals. If anyone could rival Francesco Totti's singular identity and importance to one club, surely it's Di Natale and Udinese. Yes, I know he started off elsewhere, but ten years and hundreds of goals have a way of forming a bond between a man a city. Much like Totti, he's spurned the advances of larger clubs year-after-year (including Roma), while, at age 36, remaining as integral to his club's success as he ever was.

The problem with that paradigm this season is that there is no Fabio Quagliarella in the mix, no second gun in the Udinese arsenal. Although it has to be said, thanks to Luis Muriel, Maicosuel, and the aforementioned Allan, Udinese is running up some impressive dribbling numbers. However, when you look at the club's larger passing, possession, and shooting statistics, all that fancy dribbling often goes for naught.

While having skilled one-v-one players is, due to the constant threat they present, a commodity in and of itself, when there is no payoff at the end, their value diminishes. So far this season, the individual skill of those South Americans hasn't produced much actual offense.

In that respect, the Udinese offense has been all flash, no substance. But the threat is real, so Roma's defensive positioning and patience will surely be tested Sunday afternoon/evening.

While we can (and will) speculate, the question revolves around both form and function. In terms of shape, does he stick with the 4-3-3? If so, who takes Totti's place in the middle? Will they play the role more traditionally, or will Garcia seek a reasonable facsimile of Totti's unique movement? In other words, does Totti's leeway automatically transfer to whoever fills his shoes, or will Rudi change the very nature of the offense in his absence?

The nominal replacement figures to be Marco Borriello, insofar as he'll be the man in the middle. However, when we look at the three matches in which Borriello has featured the most (Livorno, Sampdoria and Napoli), some stark differences between the comparative central functions of Totti and Borriello appear. 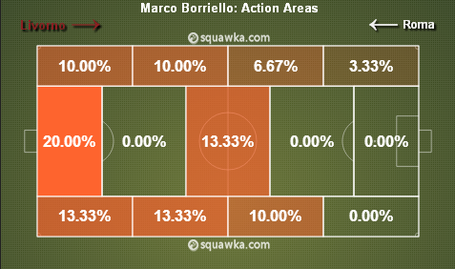 This is the distribution of Borriello's action on opening day. As you can see, he wasn't necessarily restrained from moving anywhere, but the areas to which he stuck most, the goal and midfield, are indicative of what we can expect to see for the next few weeks. Borriello will drop deep, serving more to hold up play than to redistribute, and when he does go forward, he heads straight to the belly of the beast, having virtually no part of the neutral zone between the center circle and the penalty area.

While, in terms of freedom of movement, there are surface similarities between Totti and Borriello, when it comes to their actual function as the as the central spike in Garcia's offense, the two men are diametrically opposed.

No area is more evocative of this than the nature of the touches and passes each player makes. Sure, they'll both hold up play, but Borriello's passes will be shorter and more direct, occurring, as we just saw, either immediately at midfield or on the edge of the 18; he holds it up and he finishes, there is no middle movement for Marco. He doesn't excel with the ball at his feet, so don't expect him to mimic any of Totti's false nine duties.

Want to drive this point home even further? Take a look at the sheer amount of passes they each execute as the nominal center forward. Though the sample sizes are obviously different, in some instances, we're looking at nearly a 400% difference in passing attempts. One thing Roma will definitely miss, and one area in which no one can match Totti, is switching play; which he does so effortlessly and so gracefully, making an art form out of what is essentially an escape tactic. It's perhaps his most overlooked asset, but not many players have the vision, poise and touch to switch play, to keep possession and sustain an attack when an opponent effectively closes down or over pursues an area of the pitch. 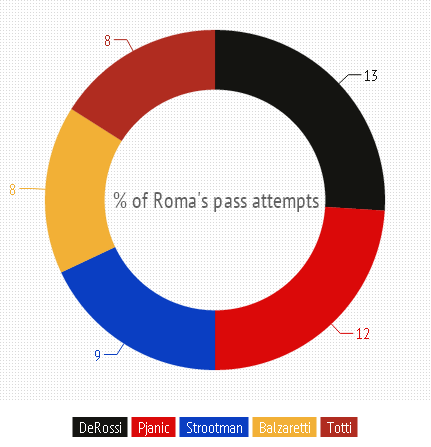 But that's not Borriello's game, so don't take this as a slight to the player, just a look at how things will necessarily have to shift without Totti's presence. Besides, it's not as if he's without his merits. There may even be an area in which Borriello bests Totti; in the air. Garcia said as much this week, "No one can play like Francesco because he's unique. If Borriello plays, our game will be different, because we'd have greater quality in the air."

But the thing about playing in the air is, of course, someone has to provide the service.

So, if not Totti, who, then? Who will move Roma along? Who will get the ball into Borriello? As we discussed yesterday, and as Rudi intimated earlier in the week, we may see a different sort of Pjanic the next few weeks, one more advanced and more focused on creating his own chances.

But that doesn't necessarily mean its Miralem or bust. If you followed any of what Garcia has had to say this week, it must be said, he hasn't exactly tipped his hand. Lest you forget, this team is blessed with attacking talent. Rather than utilizing Pjanic to a greater extent, he could just as easily put the focus on the other side of the pitch, moving the attack away from Pjanic and Florenzi and putting the onus on Federico Balzaretti, Kevin Strootman and Adem Ljajic.

Depth is a concern for any contender, and, as great as they've been this season, it's hard to imagine how this team would fare with a slate of European matches on their table. But, in order to get those matches, you gotta win domestically.

So, let's see how Rudi deals with his first rash of injuries before we dream about Tuesday's in Paris.