Roma's first true test of the season comes against one of its most hated foes, Inter Milan. Travelling to the San Siro, can Rudi Garcia make it seven in a row?

There's a theory in the world of education known as scaffolding, wherein the instructor provides sufficient and varying levels of support at the beginning of a learning experience, gradually removing the scaffolds (figuratively speaking, unless you're teaching architecture, I suppose) and ceding control of learning to the student. In layman's terms, help a lot at first, not so much afterwards. In Serie A terms, start off with Livorno and work your way up to Inter, Roma's first big boy test of the season.

If you'll permit me to continue with the educational theme, based on Inter Milan's performance through the season's first six weeks, particularly the blossoming of several young(ish) talents, Walter Mazzarri is proving to be a master teacher, transforming Inter into one of Europe's most intriguing and dangerous sides.

Fortunately for us, the collective anxiety of those once yearning for Mazzarri to lead Roma has been assuaged by Rudi Garcia's rapid ascent to reverence.

Based on the data provided by the world's most renowned repository of football data, you're looking at two of the top three rated teams in all of Europe at the moment, with Inter and Roma trailing only Barcelona. There is even more good news for Italy, when you look at their team ‘o the month, six out of the eleven honorees hail from Serie A.

But there will be plenty of time in the not-too-distant future to discuss Roma's standing among her European counterparts (fingers crossed), so, for now, let's take a look at how Roma and it's 21st century nemesis compare to the rest of the league.

Roma is in first place, this much we know, and although Inter is three places back, they're hot on Roma's heels in virtually every possible fashion...including fashion, Walt looks like he's dropped a few kilos, though that could simply be an ancillary effect of ditching the Swayze-mullet. Too soon to say.

Back to the matter at hand...

Roma is simultaneously the most prolific and parsimonious squad in Serie A, scoring the most and conceding the least. Inter? Well, they're right on Roma's proverbial heels on both fronts. When you look at the more nuanced statistics, the differences are just as slight, with the two sides within touching distance of one another in shots per game, shots conceded per game, and passing percentage, amongst others.

That both sides are among the leagues, nay, Europe's, best sides is no small feat when you consider how decidedly mediocre they were last season, finishing sixth and ninth, respectively. Although, it is perhaps because of that lack of European football, not to mention the relatively friendly start to each of their schedules, that each side has risen so quickly through the season's first six weeks. However, with a fixture list that has already featured Juventus and Fiorentina, Inter's road has been a bit rougher.

Schedules aside, after only six weeks, Roma and Inter both look like serious contenders to Juve's crown. Each side propelled by proficient and dynamic midfields, full of optimism, and spirits buoyed by a new voice in their ears.

With that in mind, let's take a look at two of the men spurring Inter to such great heights.

What does that mean? Nothing really, just an absurd and irrelevant exercise in onomastics. But it's true, take a look at the graphic below, through the first month-and-a-half of continental football, Ricky Alvarez is the second ranked player in all of Europe, behind only Lionel Messi. But, unlike Little Leo, keepers aren't exactly trembling in their boots at the sight of Pretty Ricky, as Alvarez has only scored twice this season. (Though I guess that would put him on pace for at least 10, so....nevermind)

So what makes Alvarez so special? Why is he finally fulfilling his enormous promise? If it's not the goals, what is it?

Well, quite simply, he can run, he can dribble, he can pass, and, hell, he can even tackle. He is a complete player in every sense of the word. Alvarez's three assists are third in Italy, his 2.8 key passes per match are also third, while his 5.2 dribbles per match are tops in Serie A and second only to Messi across Europes five major leagues (Italy, Spain, Germany, France, and... Liechtenstein, I think. I don't know, maybe I'm forgetting one). 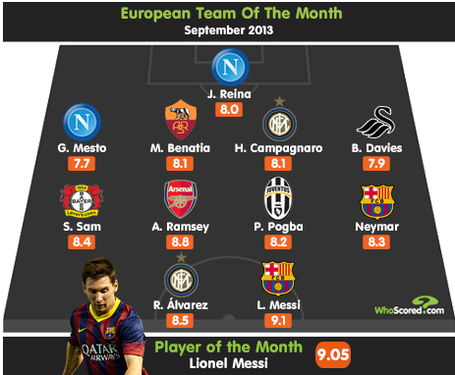 Who Scored's team of the month for September offers some promising returns for Serie A, and some potential headaches for Roma on Saturday and beyond.

Making matters more difficult for Garcia and Roma, Alvarez isn't restricted by labels or nominal tactical positions, as he's featured both as a second striker and in the heart of midfield, creating chances from the center strip, on the wings, and in the final third. He is a legitimate two-way threat, anywhere and everywhere on the pitch. Not long ago we touched upon the fact that all serious contenders have at least one virtuoso, that's Alvarez. In Inter's pack, he's the lead dog.

Given his budding brilliance and tactical flexibility, much like previous combatants Antonio Cassano and Antonio Candreva, Alvarez is a concern for virtually everyone in a Roma shirt on Saturday. But unlike those two, Ricky runs both ways, managing 3.2 tackles per match, good for third on his squad.

Simply put, when it comes to Alvarez, there is no relenting. He'll get you coming and he'll get you going. With two goals and three assists already, Alvarez might very well wind up with a double-double this year, while not only cementing himself as Inter's first among equals, but steadily climbing the pecking order in all of Serie A, not too mention making Argentina a legitimate threat next summer.

At 25 years old, Alvarez's prime years are upon us, and, based on his performance through September, they have the potential to be magnificent ones at that. And, if you believe certain stories, he'd be Roma property were it not for Walter Sabatini's fondness for faxing. Pick up the phone, Walt!

If Alvarez is arguably Serie A's best player so far, this man may very well be second, at least that's what the numbers say...

If Alvarez is ascending, then Campagnaro is clinging to life, and clinging quite well for a 33-year old defender. Defensive statistics can be a bit blasé, but, suffice it to say, Campagnaro is performing quite well, ranking among the league's best defenders in all your standard statistical categories. Hugo is the anchor of the Inter defense due in large part to his, well, anchor like tendency to keep things in place; winning 79% of headed duels, 72% of his tackles (both are among the best at his position) and committing only three fouls, Campagnaro doesn't cede ground willingly, or very often for that matter, nor does he make many mistakes.

And it doesn't stop there; Campagnaro carries his weight on the other side of the ball as well. Take a gander at these facts and figures; not only does he lead inter in passes per match, but he's doing so incredibly efficiently, completing 91% of his passes. Lest you think these are pointless lateral passes, Hugo has created five scoring chances, while also managing four successful dribbles (at an 80% success rate, no less) and has even drawn eight fouls this season. Given Mazzari's preference for the three man backline this season, Campagnaro has to pick and choose his attacking chances carefully, making his offensive contributions and decision making even more impressive.

What this all means is essentially this; he's not flashy, he probably won't end up leading the league in any defensive categories, but when it comes to the duties of a defender, particularly one with only two compatriots, he's remarkably efficient and incredibly intelligent. Throw in his offensive capabilities, and it's not hard to see why he's held in such high esteem in 2013.

Granted, these were fairly obvious selections, but, as this is Roma's first look at the new Inter, what better place to start than there two most prominent players thus far? Of course, we should also keep a watchful eye on Rodrigo Palacio and Yuto Nagatomo, not to mention the referee, this is Inter, after all.

Throughout these match previews, we've highlighted how, despite their relatively weak CVs, Roma hadn't necessarily held the upper hand in their matchups against the lightweights of Italian football. This week that paradigm stands on its head.

While Inter has, in recent years, struggled to replicate the success they enjoyed in the oughts, they're seldom a side to take lightly. Meanwhile, Roma has ran through managers and fallen down the ladder seemingly every year. Despite all that, Roma has won four of the past six meetings with the Nerazzurri, and currently rides a two match winning streak against their nefarious northern neighbors.

Again, that doesn't mean a ton, but it's testament to a quintessentially Roman problem; playing to the level of their competition, for better or worse. But, gracias to Garcia, that is no longer an issue. So what will it take for Roma to make it seven in-a-row?

Well, it's rather simple...well, simple in planning, anyways. Control the midfield and try and disrupt the Alvarez-Palacio tandem. Roma has a five man midfield with which to contend tomorrow, meaning Kevin Strootman, Daniele De Rossi, and Miralem Pjanic should all have greater defensive responsibilities than normal.

But, if they can break through that dense midfield, and increase the distance between Campagnaro and his fullback partner, Juan Jesus, they should find plenty of scoring lanes through the heart of the Inter defense. So, whether it's Gervinho, Adem Ljajic or Alessandro Florenzi, the outside forwards' job might be as a decoy as much as anything else; twisting and turning Inter's fullbacks to create space for one another, for Totti, and even for Roma's fullbacks.

Bring things back to our original educational analogy, if Roma's first six matches were your first semester of college/uni, they've already breezed through Communications 101, the token Art course, and even that Sociology class where all you do is watch movies.

Now the time for fluff is over, it's time to sack up and take your first 300 level course. Garcia's the hip, young professor, Mattia Destro the guy who's more adept at calculating his BAC than doing linear regression analysis, and Rodrigo Taddei is the older, non-traditional student whose taste in music is 12 years behind, he asks too many asinine questions, and he drives a station wagon to campus, yet somehow still gets invited to all the parties.

Analogies and analysis aside, it's Roma vs Inter, and we all hate Inter. So, let's make it seven in-a-row, shall we?