Well, it sure feels like Roma again, huh? After surrendering a 94th minute equalizer to Sassuolo, its Perspective vs Reality in the battle for Roma's soul as they head into yet another ill-timed international break.

Let's catch our collective breaths here; worst case scenario, Roma walks into the international break top of the table with a one point lead. Who among us could have actually envisioned that in August? But with Roma having effectively altered their reality this season, does that perspective do their quest for Europe a disservice?

If this team stands a chance at European play next season, much less the Scudetto, you can't drop points to the likes of Sassuolo, especially not at home. Especially not in the 94th minute! What this draw proved (and, really, it feels more like a loss, right?) was, of course, this team has no depth. If Roma's collective crosshairs weren't already fixed on Walter Sabatini and his winter plans, surely they are now.

Oh, and the whole No Totti, No Party thing has been evident he past several weeks, no? Since he went down against Napoli, Roma has managed only four goals in four contests, one of which, as you just saw, was gifted by Alessandro Longhi.

So before we dive deeper into this semi-disaster, let's take a quick look at the good, the bad, and the ugly from this match.

Not much, really. Marco Borriello's injury early in the first half forced Miralem Pjanic out of midfield, thereby reducing his effectiveness; indeed, his passing and creating numbers today were below his season averages.

Leandro Castan availed himself pretty well given his recent absence. Castan completed 96% of his passes, intercepted three Sassuolo's passes and was a perfect six-for-six in tackles. Daniele De Rossi was up to his usual tricks, rescuing the Roma defense time and time again, picking off five passes and making three clearances. He was there when Roma needed him, particularly in the last 20 minutes or so.

Offensively speaking, there was just no direct threat, save for Adem Ljajic. Roma's favorite Nutella aficionado managed seven of the clubs sixteen shots and five of their thirteen successful dribbles. Simply put, he was the only direct threat at Gianluca Pegolo's goal, but what we witnessed was the dual nature of falling in the box. Sometimes when you cry wolf, no one responds. Nevertheless, Ljajic created several genuine scoring chances and, had things worked out differently, he could've walked away from this match with a hat trick.

This picture tells the story 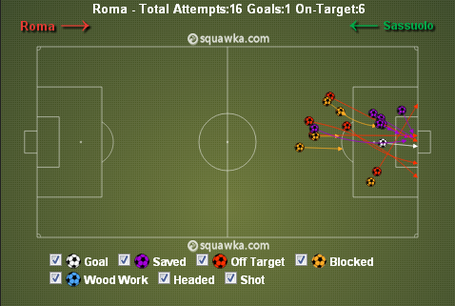 Half of Roma's shots came from beyond the 18-yard box, and many of those that didn't were turned away by Pegolo. I suppose this is somewhat ironic because this is precisely how Roma's defense has succeeded for much of this season, keeping the opponent out of the 18-yard box. Once more, outside of Ljajic, Roma struggled to get into scoring position. Once Borriello went off, Pjanic's creativity went to waste and Sassuolo effectively pushed him wide of goal, leaving the onus on Adem.

Michael Bradley. Oh, Michael. What can we say? He seemed a step behind, many of his passes were misguided, and he whiffed on the clearance that ultimately cost Roma two points. We'll find better video shortly, I'm sure, but take a look below. Sure, there were other players in the vicinity, but none as close as Bradley.

There's no way around it, dropping two points in the 94th minute to a newly promoted side is gonna sting, especially when the next match is two weeks away. Remember, Sassuolo's is the league's worst defensive side, having allowed 27 goals coming into this match, with an average of 3.55 goals scored during their first 11 matches.

Roma really have no one to blame but themselves, the chances were there (mostly by Ljajic), but they didn't go in, and sometimes that just happens. But, here we are, its November 10th and at the end of the day Roma is still in first place.

Keeping perspective is great, the club is in a far, far better spot than they were a year ago. That's all well and good, but let's talks about reality for a minute. Roma have put themselves in a place to contend, whether or not we saw this coming is irrelevant, they have a chance at something special, which makes performances like this all the more damning to our hopes.

It's going to be a long two weeks and we better hope Big Walt is working the phones as we speak...more to come.