Roma, looking to break a string of three draws, travel northward to take on Atalanta. Although they've dominated this matchup in recent years, there has been one constant menace.

Share All sharing options for: Roma vs Atalanta Preview

It's that time of year again, the Atalanta fixture, which means it's time to tango with German Denis. Roma may have won five of their last six matchups against the Bergamo outfit, but Denis has made a veritable meal out of Roman defenses the past few years. With five goals and two assists in 11 career matches against Roma, Denis has represented a constant threat in an otherwise overlooked opponent. The Denis Effect was so great that, leading into this fixture last year, he was scoring on Roma about once an hour.

But with a single victory in their last six matchups against the Giallorossi, Denis was really the lone star on the horizon for Atalanta. But what about this season, what sort of threat does Denis and the rest of The Goddesses pose in the present tense?

You think the past few weeks have been tough on Roman souls, try stepping inside the mind of an Atalanta fan.

First of all, there are the injuries; it's hard to get stoked about your team's chances against anyone, let alone the league's second place team, when your players are dropping like flies. For Sunday's tilt, Atalanta will be missing the following: Lionel Scaloni, Mario Yepes, Cristian Raimondi, Gianpaolo Bellini, and Guglielmo Stendardo. Not impressive names in any sense, but they are some of Atalanta's best defenders.

Even when fully equipped, Atalanta's attack has struggled mightily this season. While few would argue that anyone other than German Denis is the bellwether for their attack, by and large Atalanta's forwards have performed miserably this season. With seven goals (five from Denis) and one assist, Atalanta's strikers have mustered only eight points through thirteen matches. Just how bad is that, exactly? Well, consider this, Roma's strikers have 11 assists alone, tack on their 10 goals, and Roma's forward pairings have made Denis & Company look downright amateurish.

Complicating matters further for the Nerazzuri, the buildup play behind those strikers has been equally atrocious. While their 47% possession looks pretty awful, it's actually about the league mean, but when you look at their passing numbers, the results are neither pretty nor productive.

If you can't hang onto the ball, you'd better make damn sure you can move it quickly, efficiently and effectively. At 77%, their passing success is second to last in the league,  as are their 6.2 successful dribbles per match. Both of which should help explain the dearth of chances their offense creates--only 7.3 per match, nearly four less than Roma.

So, if you're constantly losing the ball, you can't pass it particularly well, and your players lack the skill or creativity to take on defenders, it should come as no surprise that you don't threaten your opponents goal very often. In fact, Atalanta ranks almost dead last in shots per match and shots on-target per match, while managing only 14 goals, fifth fewest in Italy. Whether it falls down to the midfield or the attack, Atalanta's offense has been absent the past several weeks, having been blanked in three of their past five matches.

Any chance you can reference this song, you have to do it. No questions asked. While some of you probably weren't born when this GNR classic came out, it's quite apropos for Roma's run through November. After running roughshod over Serie A to the tune of 10 straight victories, Roma came crashing back to Earth in November; three matches, three points, two goals, only one of which was scored of their own accord. Success has been replaced by stagnation.

Earlier this week we discussed the broader implications of this month's torpidity, so I won't rehash that from a Meta level, instead let's take a quick glance at what the numbers have to say; has Roma really been that atrocious, or has luck just abandoned them at the worst times?

Totti: A Tale of Threes

As Homer Jay once said, you can use statistics to prove anything, 14% of all people know that. So let's compare two arbitrary three-match stretches to see how life differs with and without Francesco. For Totti Time, we'll use the last three matches in which he played (Bologna, Inter, Napoli) and compare them to No Fun November (Torino, Sassuolo, Cagliari). 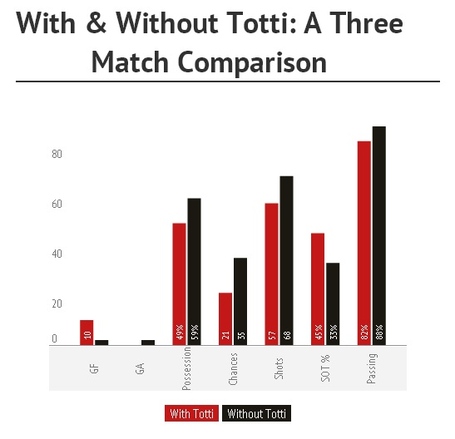 As you can see on the graph, (which is, admittedly, rather arbitrary) Roma's offense hasn't exactly floundered without Totti, though that is probably due to the comparative quality of the opponents in this sample. No matter how the remainder of this season unfolds, November may ultimately prove to be the tipping point, for better or worse; on paper, with our without Totti, Roma should have steamrolled their past three opponents.

But when we look at the ten straight victories, as great as Roma played during those two-and-a-half months, they still needed a bit of luck, some kind refereeing, and some last gasp magic from Michael Bradley and Marco Borriello. Last week's match against Cagliari is the perfect example of what can go wrong when luck isn't on your side. Roma outshot Cagliari by better than a 2:1 margin, held an astounding 66% possession, completed 87% of their passes, and created 14 chances--all better marks than their season averages--but they simply didn't catch the breaks.

Luck or no luck, the product on the pitch wasn't terribly different from the first ten weeks. Even without Totti, Roma managed to pass, move and create at higher clips than they have all year, albeit against decidedly inferior opponents. So while I'd caution you not too read too much into that graph, it does tell us one thing; losing Francesco Totti isn't as dire a prospect as it has been in the past, largely thanks to Miralem Pjanic.

What we don't need any graphs to understand is this; teams with serious ambitions don't drop points against the minnows of Serie A. If ever there were a stretch in which Roma should have felt comfortable without Totti, surely this was it and, whether it was due to providence or not, they blew it and suddenly find themselves in second place behind a surging Juventus side. With Fiorentina up next week, and with away fixtures to Milan and The Old Lady looming, things won't get any easier, with or without Totti

Atalanta With the Lead

There isn't really much else to say, the facts and figures say this should be a Roman victory, but look how far that got us in November. With the calendar turning over to December, Rudi Garcia better hope Roma can uncover some of their traditional late year magic.