In a match they probably deserved to lose, Roma were bailed out by a last second miracle from Kevin Strootman, snatching a draw from Atalanta in the 90th minute.

Well, it sure looked like Roma were destined to suffer an ignominious defeat at hands of Atalanta, or should I say, at the hands of Morgan De Sanctis.

That is until Kevin Strootman stepped in and delivered a moral victory for Rudi Garcia and Roma. But that's what Dutch Jesuus does, he alters destinies. Strootman got on the end of an Adem Ljajic cross in the 90th minute and calmly tapped it home with his right foot. Not an astounding goal by any means, but one that kept Roma undefeated for another week.

One look at that goal and its fairly evident what was wrong from the start, the starting XI. The problem was this, Garcia's starting XI was essentially comprised by three holding midfielders supporting three runners, each of whom prefers to be out wide; there was simply no one to link them, no one to create, and no one to sustain any momentum. Roma was stuck in the midfield and could muster little more than a series of layoffs on the perimeter of the 18-yard box; there was no presence in the center and no spark in the midfield to move the attack forward.

Take a look at the half-to-half discrepancy in Roma's field position. 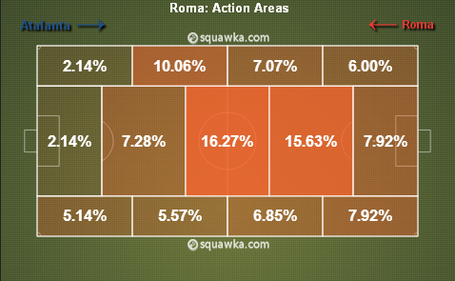 As you can see, Roma were stuck in either the neutral zone between midfield and their own 18, or mired in the midfield, unable to advance through Luca Cigarini, Riccardo Cazzola and Michele Canini. 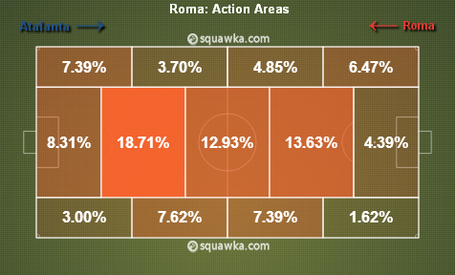 Now, contrast that to the second half and you can see how much further up the pitch Roma were able to advance, with nearly four times as much action occurring in the attacking third. If we were to narrow it down even further to when Ljajic and Miralem Pjanic came on, nearly 30% of the action occurred in Atalanta's half.

If you woke up this morning/evening (I lose track of where we all are) glanced at Rudi's Starting XI and scratched your head, consider your concerns validated. A lineup without Totti is bad enough, but when you also remove Pjanic from the equation, the Roman offense is utterly rudderless, lacking direction, creativity, and simple momentum. Making matters worse, when the forwards all prefer to dance on the periphery, what's left? How do you threaten, much less score a goal?

Someone get Mattia Destro's doctor on the phone, STAT.

So while we savor this moral victory, let's harken back to the gladiatorial days and run this match down thumbs up, thumbs down style.

We just devoted a few hundred words to it, but this was, by far, Rudi Garcia's worst match at the helm. We can give him a bit of leeway with respect to the number of players on the verge of suspension ahead of the Fiorentina fixture next week, but this XI was doomed from the start.

Where do we begin? Maicon attempted three shots on goal, none of which were technically on goal. The Brazilian had a team high 93 touches and attempted 59 passes, six of which were crosses, none of which found a teammate. He didn't have a single chance created and he was dispossessed twice. The Maicon of August and September has all but disappeared.

Ugh, what can you even say? When Roma signed him over the summer, you knew this sort of thing was bound to happen.

Did he over pursue the ball? Did it take a funny bounce? Was he too nonchalant? I'll just leave that there for a while and allow you to draw your own conclusions.

He was the hero of the day, of course, showing good patience and awareness to pounce on Ljajic's cross. Beyond that, Strootman had five shots, three on target, one chance created and completed 89% of his 57 passes, he was also three-for-four on long balls; which, given the lack of a link up player in the first half, was huge. All told, Strootman had 82 touches and was by far Roma's most persistent threat. Defensively speaking, TDJ (The Dutch Jesuus) had a match high eight tackles to go along with three clearances.

Gervinho and The Balkan Boys

Yes, Gervinho...at least in the second half. With the insertion of Ljajic and Pjanic, the tenor of the game changed. Gervinho was shifted to the right and was free to move forward, with the playmaking onus falling back on Pjanic, and Ljajic attacking from the left. With little more than 30 minutes between Pjanic and Ljajic, the numbers won't floor you, but between the two boys from the Balkan Peninsula, they created three scoring chances, two successful dribbles and, of course, Ljajic's assist. For his part, Gervinho completed 88% of his passes, managed three key passes and two shots on target.

We all sort of assumed, given the starting XI, that Pjanic and Ljajic would be the first off the bench, and they provided exactly what was missing in the first half; creativity and direction. Unfortunately for Roma, it was too little, too late.

So that's it for another disappointing Sunday afternoon. Roma really were fortunate to walk away with one point from this one and temporarily sit in a tie for first with Juventus. So, come on Udinese!