Roma versus Milan has always been a ballet of envy and animosity, with one side inevitably left wanting. On Monday night, it’s Milan’s turn to peer up the table with resentment at second place Roma.

Share All sharing options for: Roma vs Milan Preview

Although Roma and Milan have gone an even 2-2-2 over their past six matchups, historically speaking, when these two sides meet, Milan is the object of envy. But not this time around, this time is different. This season Milan sits an incredible 19 points behind Roma in the Serie A standings, and though they only have one victory in their past six, there is still an awful lot of talent wearing the red and black. Of course, there's still the matter of their eighteen Scudettos and seven Champions League titles...but, hey, let's live in the now.

Right now, the table tells us these teams couldn't be more different. Roma saunters into the San Siro sporting a league best +24 differential, while Milan has struggled to break even, conceding and scoring 23 goals. If these clubs were mutual funds, Roma would put you in the lap of luxury, while Milan would at least keep you off the dole

Flimsy financial metaphors aside, the waning days of 2013 haven't been particularly kind to either club. Roma has played out the string on the year of the snake with four draws sandwiched between two victories, while Max Allegri's side sports four draws of their own, to go along with one victory and one defeat. Point being, despite the disparity in the standings, neither side is currently setting the peninsula on fire.

But, if you popped by yesterday, you no doubt heard that Roma is about to get an injection of some fresh, 37-year-old blood. With a place of virtual worship named in his honor, we don't really need to expound upon the reasons why the return of our patron saint is important for Roma. With this trip to the San Siro and next week's home encounter with Catania, the return of Francesco Totti should go a long way in delivering the good vibrations Roma needs as they head into the winter break.

Before we deal with the Elephants, let's take a look at Monday night's opponents...

As much as we all disdain Milan, it's still quite shocking to see them sitting in ninth place, an ignominy they currently share with their English counterparts Manchester United. Oh, how the mighty have fallen, but that's what you get for being smug.

But I digress. When it comes to balls going in nets, Milan has managed to keep an even tab this season, and, it must be said, they've actually been a pretty stifling defensive side, conceding the second fewest shots per game in the league. So, while they've struggled to keep their heads above water, Milan still has hope for better days ahead, but where exactly have they gone wrong?

Well, how ‘bout the San Siro for starters?

While Milan has fallen behind the league pace in terms of defending one's own ground, the statistical gulfs aren't exactly biblical. For Milan, the trouble exacerbates when we factor in Roma's ridiculously impressive road numbers. Roma exceeds the league average for away sides in points per match, winning percentage, goals scored, etc. Basically, everywhere Milan falters at home, Roma surges on the road.

To put an even finer point on it, Milan concedes at the worst possible moments, often relenting to opponents in the first 15 minutes of each half. Of their seven goals conceded in the San Siro, four have come in either the 0-15 or 46-60 minute marks. I bet you thought this is where I'd say something like "This is exactly when and where Roma strikes", but you--and I for that matter, because I was about to write that--would be wrong. On the road, Roma has been at their most vigilant from the hour mark onward, scoring eight of their thirteen goals from the 61st minute forward. While it's really true of any match anywhere on the planet, you'll want to stay tuned for the first 15-20 minutes after these fellas come out of the dressing rooms.

Putting aside their home statistics for a second, this is still Milan we're dealing with here, and while they won't exactly be trotting out Marco Van Basten, Andriy Shevchenko, or Paolo Malidini, there is still an awful lot of talent on this club; Nigel de Jong is having a solid season, Kaka's return has been relatively pleasant, and even our old pal Philippe Mexes has experienced a bit of a rebirth, but when we talk about this Milan, there is but one name.

By manage, I don't mean Roberto Mancini's misguided attempts to regulate Balotelli's behavior; I'm talking about the sometimes fruitless endeavor that is stopping Mario Balotelli. Put simply, Mario Balotelli is a singularity; there may be no player quite like him on the planet. Super Mario (which is the natural choice of nicknames, I get it, but, come on, surely we can do better than that, right?) has an exceptional and unparalleled combination of size, speed, agility and a simple knack for scoring, a knack that has been particular sharp since coming to the red and black side of Milan. In only 29 appearances across all competitions since joining the Rossoneri, Balotelli has 20 goals, throw in the two he scored in three appearances for the Azzurri, and that total rises to 22 goals in 32 matches; 2013 has been a very, very good year for Balotelli, to say the least.

It's a shame he often gets provoked and people say he's a bad guy. He can relax with me: I won't need to say any nasty words to mark him -Benatia on Balotelli

Really, the only downside to his scoring has been his lack of efficiency when it comes to converting shot into goals. Using his 18 Milan league goals as a guidepost, Balotelli is only converting on roughly 13% of his shots, which isn't what you'd expect from a player of his caliber, but that brings us to our next point, shots.

Balotelli really is the be-all-end-all of the Milan offense. A.C. Milan, which, remember, stands for Always Cheating, has taken 257 shots in league play this season, of which, 62 have come off Balotelli's boots. Do the simple math, and you can see how crucial he is to Milan's offense; he takes nearly 25% of his clubs shots, while accounting for 26% of their goals. Throw in his two assists, and he's had a hand in nearly 35% of Milan's goals, while also leading Serie A in both total shots and shots per match. 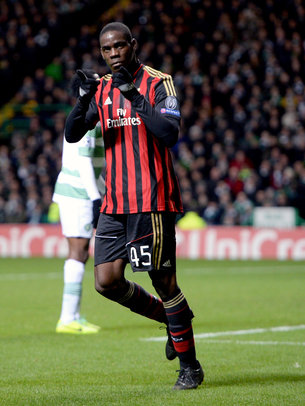 So, while his conversion rate isn't astounding, given his sheer volume of shots, it's certainly understandable; he is, for all intents and purposes, Milan's offense. Now, here is where we can argue the merits of shots in and of themselves. Does a greater number of shots hold value itself, or is it a misnomer? Recent progress in football metrics has shown that, in fact, not all shots are created equal. The nature of the shots, in terms of placement on goal and area of the pitch, has a tremendous influence on accuracy, conversion rates, and, of course, goals, expected or otherwise. There are simply areas of the pitch where shots are more efficient, more effective and more dangerous.

But, might Balotelli's numbers prove an exception to that rule? Can you really hold him to the same standard when he occupies such an incredibly large place in his club's offense? Super Mario's 6.6 shots per match not only lead the league, they're 35% more than his closest competitor, Alessandro Diamanti. Given that pretty sizeable gulf in total shots, the fact that he puts 57% of them on target is actually pretty impressive, so his somewhat mediocre conversion rate is forgivable, if not understandable.

But numbers are numbers, they help tell the story, but they're boring. If you watch him play and don't think "fuck, this kid is good", I don't know what to tell you, so let's take a look at what else to watch besides Balotelli on Monday.

Keep An Eye On

It's Monday night. It's Milan. Francesco Totti is back!