He may be a central defender, but today, he was Roma's talisman. Mehdi Benatia's two headed goals highlighted a 4-0 romp over Catania.

If you tuned in from minute one, you may have noticed some substantial changes in Rudi Garcia's Roma, and we're not just talking about the ghastly site of Francesco Totti wearing white boots. Garcia, whether to cover for the loss of Daniele De Rossi and Kevin Strootman, or simply to accommodate his sudden glut of forwards, broke the mold and ran out a 4-2-3-1 against Catania.

Not exactly a paradigm shifting move, but if you saw the match or simply read the stat sheets, you know this subtle shift worked wonders for Roma.

The strange thing about this match was, for the first 10-15 minutes, it looked like the same old story; Roma moved the ball well enough, but, more often than not, it resulted in dancing and dribbling on the peripheries rather direct threats at goal.

But that all changed with an 18th minute corner kick. Following a beautifully played outswinger, Mattia Destro made decent enough contact, but when you take a look at the highlights below, the trajectory was pretty flat and the ball appeared dead in the water. Enter Benatia.

Whether he did it intentionally or not, we can't say, but watch how Benatia held his ground, kept his eye on the ball and pounced on Destro's dying header and, at the perfect moment, whipped his forehead into the sweet spot of the ball, burying it past a diving Alberto Frison.

Strange as it might sound, for a 4-0 game, it wasn't terribly exciting. The second goal could either be described as surprising, well timed, or, to borrow a hockey phrase, a garbage goal.

Following a pretty well threaded ball from Maicon, Frison looked ready to scoop up the failed attempt, only the ball took sort of an inbetween hop, falling just past the tips of Frison's fingers, caroming off Alexis Rolin's shoulder and falling to an incredibly open and incredibly surprised Destro. Credit to Destro, he didn't go wild celebrating a rather cheap goal.

Benatia struck again in the 59th minute, once again getting his dome on the end of a wonderfully played set piece. I suppose it's somewhat ironic, but when we talk about what makes Benatia such a fantastic player, we focus on how his attributes--his understanding of the game, his innate timing, impeccable vision, his size and his athleticism--facilitate his defensive game. However, as we saw today, it's these same qualities that make him such a surprising offensive threat, particularly in set pieces. Mehdi Benatia is now Roma's leading scorer. Let that sink in for a moment.

Also give full marks to Adem Ljajic on that goal, what a wonderfully struck free kick. Roma currently have an embarrassment of riches in that regard, with Ljajic, Totti and Pjanic capable of changing the game with their ability to bend a ball around, over, or through a defensive wall.

Roma was up 2-0, the game wasn't exactly sealed yet, but then this happened:

But then he did this:

That right there is the Gervinho special, folks; stupidity followed by the sublime. In a more crucial match, Gervinho's gaffe would've ruined the day, but then he comes back and shows you why he's been such a sought after player for much of his career. Watch as he takes the ball from 30+ yards out, dribbles past and through five defenders, lays it off to Ljajic, continues his run and takes the feed from #8 and chips it over the falling Frison.

You take the good, you take the bad with Gervinho, and today he gave us both. But, four-nil is four-nil, so we can't complain. So let's keep this one positive.

Can there really be any other? Benatia was damn near perfect on Sunday, approaching perfect ratings from most media outlets. If you ever wondered why Roma shelled out €14m for this guy, look no further than Sunday. He's a defender, after all, so let's start with how he helped shut down the Catania attack. 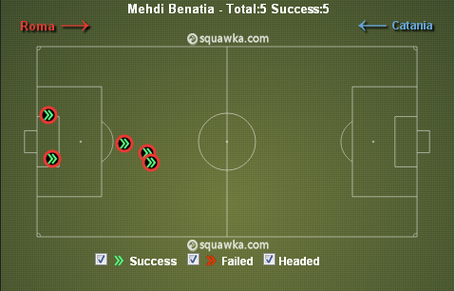 This is a visualization of Benatia's clearances today. While this is nothing terribly dramatic, you can see how Benatia can rush up the pitch to disrupt an attack before it really takes hold, breaking up a play before it reaches the final third, but he can also be the last line of defense, rescuing Roma when all else fails. On top of his five clearances, Benatia also had five interceptions and one tackle. And while you saw the two goals, Benatia had 79 touches, completed 84% of his passes, was 7-for-11 on long balls, and even drew a foul. He was a beast on both sides of the ball, simply a marvelous performance.

While he may not have registered on the scorer's ledger, this was undoubtedly Ljajic's best performance in a Roma shirt. Statistically speaking, Ljajic completed 93% of his passes, doled out two assists, two key passes, two successful dribbles, four shots on goal, drew five fouls, and even chipped in two tackles. In broader terms, Ljajic was EVERYWHERE, creating from wide, deep, left and right. He held up play, he took on defenders one-v-one, he was magnificent from set pieces, and played a text book two-man game with Gervinho, Totti and the rest of Roma forwards. This is what you pay Adem Ljajic for; to be a menace all over the pitch, to take on, to create and to threaten.

Just a quick aside, take a look at these names: Adem Ljajic, Miralem Pjanic, Gervinho, Francesco Totti, Mattia Destro and Alessandro Florenzi. That is just an absurd collection of talent, one that encompasses virtually every facet of attacking football; you have speed, creativity, vision, intelligence, on the ball movement, off the ball movement, endurance and set piece mastery. Really, the only thing Roma's attack is missing is a statuesque target man, but that's almost obsolete in today's game.

That is just an incredible amount of talent, most of it nowhere near its prime, I might add. The future is indeed bright.

We've sort of taken a tongue-in-cheek approach to Garcia's formational rigidity this year, but in one fell swoop, Garcia showed the willingness to adapt and the ability to recognize and play to his team's strengths. That list of name above is impressive, no doubt, but what Garcia did today was find a way to deploy all of them at once; allowing each to flourish in roles that accentuated and complemented their respective skill sets.

We mentioned Benatia, but Leandro Castan and Dodo were impressive today, virtually removing Catania's attack from the picture, full stop. The elephants only managed 10 shots, only one of which was on target; Roma had 10 shots on target alone. Catania completed 69% of their passes today, while only maintaining a pitiful 32% possession. You also have to give Michael Bradley--and, by extension, Rudi Garcia--credit for keeping the Elephants at bay. By utilizing Bradley as the defensive half of the double pivot, Garcia played to The Bald Beauty's strengths; serving as defensive outlet for his fellow midfielders. Today, with two tackles, three clearances and three interceptions, Bradley did not disappoint.

All told, between Bradley, Benatia, Castan, Maicon and Dodo, Roma intercepted 18 passes and made 13 tackles. If you're wondering why Catania couldn't mount an attack today, there's your answer. Throw in Pjanic's four tackles and two picks, and it's pretty clear, Roma read Catania like a book.

We already touched upon it, but simply finding a way to field Totti, Pjanic, Ljajic, Gervinho, Florenzi and Destro all at once was a stroke of brilliance in and of itself. As we expected, Totti played a bit of a deeper/truer false-nine role, sitting behind the attack, taking the ball from Pjanic, and distributing it to the forwards. Totti was 12-of-14 on long balls, created five scoring chances. and completed 50% of his crosses.

Garcia's 4-2-3-1 on this day was near perfect. If Bradley and Pjanic didn't stop the attack in the midfield, Benatia and Castan were ready to pounce, giving Morgan De Sanctis a defacto day off. The offense moved seamlessly from back to front, and once it reached Totti, the options were limitless. It will be interesting to see if and when he rolls this formation out again, but one thing is for certain, it is an extremely dangerous and potent lineup.

Heading into the winter break and with an away fixture against Juventus looming, this was exactly the sort of performance Roma needed. Garcia's crew was crisp, they were fast, and they were efficient.

Roma currently sit in second place, five points behind Juventus and still undefeated, a far cry from where they were a year ago. Rudi Garcia has effectively erased the pain of May 26th and transformed Roma's 2013 in the process.

Roma's 2014 is a dreamer's paradise, full of possibilities and the previously unthinkable...and it's only two weeks away.