His return may have been brief, but it was instrumental. In his first match since May, Mattia Destro delivered the game winner over Fiorentina.

Well, that's more like it, huh? In a wild end-to-end match, Roma got back to their winning ways with a 2-1 victory over Fiorentina, thanks to a timely goal from a forgotten player and an unforgettable performance from a once unwanted man.

Although the Viola looked the better side in the first moments of the match, Maicon found himself in the right place at the right time. Big Doug started things off by playing an outswinger towards an awaiting Gervinho on the left hand side of the pitch. Gervinho, as is his want, summarily dribbled past his defender, drawing another Fiorentina defender towards the goal line in the process, and centered the ball to Florenzi. Roma's third son acted quickly, playing the ball off to Maicon, who calmly tapped it past Neto to give Roma an early lead in the 7th minute.

After trading blows for the next 20 minutes or so, Fiorentina would level things following a beautiful bit of skill by Nenad Tomovic. The Viola fullback blew past his countrymen Adem Ljajic, hugging the goal line and drawing five Roma players inwards towards De Sanctis' goal, then played a perfect outswinger to an unmarked Juan Vargas in the 30th minute.

The match would remain relatively level for the next half-hour, though Roma would press a bit further up the pitch than its counterpart. Then, nearly half way through the second set, something glorious happened.

Not the grandest exhibition of skill, and it was sorely lacking in corner flag grinding, but the mere sight of Mattia Destro on the pitch surely brought a smile to your face. But slowdown that video, take a look at the progression of play, and you can see part of what makes Destro so promising. Look at his patience, the subtle way in which he tracks Gervinho's movement, and his almost innate understanding of when and how to separate from his defender, find space, and bury it past the keeper. Destro may never wow the world with an array of step overs, but his movement and understanding of the game will see him reach great heights.

Before we delve into this week's Thumbs Up/Thumbs Down (not sure if that's gonna be a thing yet), lets rehash the keys to the match we discussed yesterday.

There may have been some doubts about his nationality, but there is no equivocation when it comes to this; Giuseppe Rossi is a hell of a player. As it tends to be with players of his caliber, mitigation and a bit of luck is really your best bet. Going into the match, we discussed the manners in which Roma could potentially limit the damage wrought by Rossi--pin him to the sideline, keep the ball of his left foot and don't let him cut in--so let's see how how Roma's defense faired in that regard. 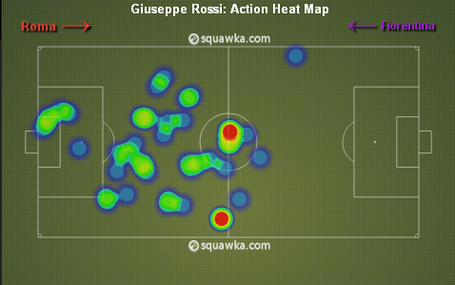 Based solely on this graph, you'd have to say they did a fantastic job. Garcia's defense effectively kept Rossi out of scoring position all afternoon and generally cut him out of the Fiorentina attack. Just look at how they kept him confined (for the most part) to the left sideline, some 30+ yards away from goal where he can do almost no damage, and where his dangerous left foot is all but useless. Beyond simple positioning, however, the Roma defense rendered Rossi nearly useless. While he's not necessarily the lynch pin of the Viola attack, Roma ensured that Rossi was cut-off from his teammates nonetheless. On the afternoon, Rossi made 37 touches (roughly his average), but he was under constant pressure from De Rossi, Strootman, and the rest of Roma's defensive masterminds, who dispossessed the Jersey Boy twice, forced him into turnovers and even drew him offsides. Rossi, being the player he is, still managed to get his usual three shots, but, thanks in part to Roma's defensive pressure and positioning, only one was on target.

For the sake of my narrative structure (a term I use loosely, I might add), I had to pit Valero against somebody, and, based on general position, De Rossi made the most sense, but through a concerted effort, the Roman defense managed to make Valero effectively vanish this afternoon. De Rossi, Kevin Strootman, and Mehdi Benatia all had a hand in disrupting Valero's role in the Viola attack; harrying, tackling, intercepting and generally getting in his way whenever possible. Yes, Valero created several scoring chances, but his touches were down, he was disposed four times and his passing percentage was nearly 12 points lower than his season average. DDR and Strootman were particularly effective in harassing the Spaniard in the center of the park.

I'm sure his first foray against his former team wasn't as splendiferous as he'd imagined, but Adem Ljajic was pretty effective against Fiorentina. Ljajic completed 93% of his passes, created two scoring chances, and took three shots, forcing Neto to save two of those. So, although he didn't register on the scoring ledger, he was a pretty consistent threat nonetheless, particularly in the second half.

Not much to say on this one, they only needed twenty minutes or so to exact retribution for the Maicon goal, but following Destro's game winner in the 67th minute, Roma were able to weather the storm and deny Fiorentina the equalizer.

Okay, here we go. In the grand tradition of Roman emperors everywhere, we'll mete out our punishments and rewards with the most useful and opposable of human extremities.

This was an exciting match, and one in which Roma got back to her winning ways, so, fortunately, there aren't a whole lot of negatives upon which to harp, but here we go...

Putting aside his double yellow/red card for a minute, this was not Miralem's finest moment in a Roma shirt. Although Pjanic had the most touches of anyone on the pitch, none of them were particularly effective, as his numbers, in nearly all facets, were below their respective season marks. He didn't manage a single shot on target, his passes weren't quite as precise, and he was dispossessed three times, while turning it over on two more occasions. Fiorentina did a great job in making life uncomfortable for Pjanic on Sunday. Based on pure match ratings, it was his worst performance of the year, but with Francesco Totti still not at 100%, Pjanic's presence will be sorely missed next week in Milan.

Morgan, Morgan, Morgan, where do we begin? The full gamut of the MDS experience was on display today. First there was the odd display of De Sanctis simultaneously pleading for a yellow-ranting, raving, screaming-while attempting a goal kick, slipping in the process, and turning the ball over on said goal kick, which traveled all of 25 yards. That was bad Morgan. Good Morgan appeared making a fantastic leaping save on a free kick in the second half.

What can we say about this man that hasn't already been said? If he's not the best central defender in the league, I don't know who is, and today he was instrumental in making Rossi and Valero essentially inoperable. Benatia was a perfect three-for-three in tackles, he made a match high seven interceptions and six clearances, he blocked two shots and drew one attacker offsides; he even managed two shots and played three accurate long balls. Benatia's full repertoire was on display today, using his size and intuition to quash the Fiorentina attack time and time again.

Teach Me How To Dougie had been in a bit of a funk, that was no secret, but he busted out in a big way today. Not only did he start and finish the game's first goal, he put 75% of his shots on target, pulled off two successful dribbles, completed 85% of his passes, made an interception and two clearances. Maicon pretty much dominated the right side of the pitch, offensively and defensively, and showed the form that helped propel Rudi Garcia's men to ten straight victories.

Roma needs Maicon if they're to threaten for the dreaded S-word.

Your man of the match, by far. Take a look at his touches; he was everywhere, threatening the Viola goal from nearly every corner and every angle possible. 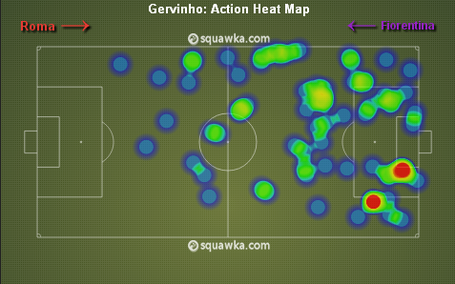 There was no limit to Gervinho's movement today, and the stats back that up. Gervinho managed six key passes (three from deep and three in the box), he had six successful dribbles (in the box, out of the box, on the left and on the right) and had a hand in both goals. Simply put, he was everywhere and did everything, using his speed and dribbling to make Fiorentina look foolish.

We're 15 weeks into the Serie A season and Roma sits in second place, a mere three points behind Juventus. Roma needed this Maicon, this Gervinho and this victory, not only to keep up with Juventus, but to recapture the magic that had seemingly escaped them.