Taking a Look at Torosidis

Although he only has five matches under his belt, Vasilis Torosidis was Roma's sole winter purchase, so we take a quick look to see how he's settling into life in Serie A.

Share All sharing options for: Taking a Look at Torosidis

We'll take a break from CdT's Fashion Watch/Conclave Countdown 2013 and take a look at some actual on-pitch stories. Though not cut from the same cloth as our PDO v Destro dissection (which has really been decided by default, right?) or The Great Goalkeeper Debate (again, by default), but since we have the time, we'll take a closer look at our newest Roman, Vasilis Torosidis.

Torosidis, the beginning and ending of Roma's 2013 winter mercato, has logged five appearances and 377 minutes thus far for Roma. So while this doesn't give us a whole lot to analyze, we can at least take a broad look at how this versatile Greek is settling into life on the peninsula.

Prior to making the move to Italy, Torosidis had logged pretty heavy minutes for Olympiacos in both the Greek Super League and the Champions League, scoring in both competitions, he also went the full 90 in four World Cup qualifiers for Greece.

Suddenly ripped from his homeland, he then found himself on the Roman pitch for all of 18 minutes in his first three matches, two under Zeman, one under Andreazzoli. Fortunately for Torosidis, he's since found a home under Andreazzoli, featuring as a right midfielder in AA's 3-4-2-1 formation.

Arriving in Rome, Torosidis was purported to be a versatile player, capable of making deliberate forward runs, powerful shots from distance and accurate service from the flanks. So let's take a quick look to see how he's lived up to that billing through his first handful of appearances (WARNING: Small Sample Size Ahead)

This one is really hard and sort of pointless to judge, as ever since Andreazzoli took the reins and instituted his 3-4-2-1, Torosidis has been a fixture on the right flank, going the full 90 in each of the past four matches, playing just wide of Miralem Pjanic. His one and only appearance as a true full back came under Zeman, as a 73rd minute substitute, spelling Ivan Piris against Bologna in that 3-3 draw.

However, should the need arise, Torosidis has shown the ability to play as a true full back, midfielder, winger and defensive midfielder. But having a steady gig of any sort is probably best, right?

While commenting and complimenting a player on their forward runs is somewhat nebulous and, to a certain extent, dictated by tactical decisions, Torosidis' heat maps and actions areas from his first five matches do show a proclivity and ability to move forward. Let's use the Juventus match as an example, his best performance in a Roma shirt thus far. 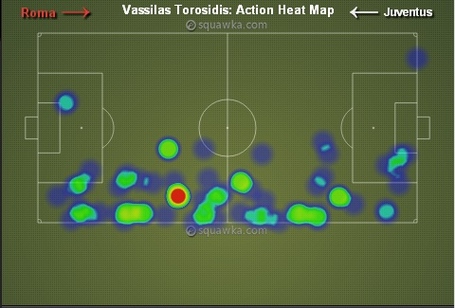 In this match, his first start for Roma, we can see a pretty even distribution across the right flank. However, much like the tactical focus in general, Torosidis ventured further up the pitch to a far greater extent in the second half, with roughly 24% of his action occurring in and around the 18-yard box, compared to approximately 5% of his action occurring in these same areas in the first half.

For good measure, and simply because I like heat maps, we'll throw in a few more. These matches, against Genoa and Atalanta, further showcase Torosidis' ability to move forward, particularly the Genoa match, as Torosidis was all over the pitch, literally. 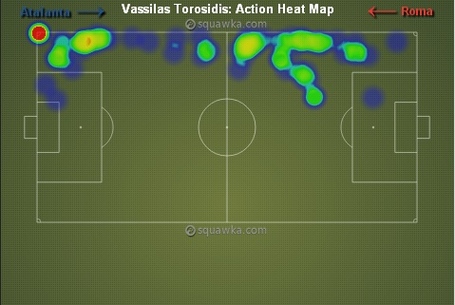 As you can see, he was pretty evenly distributed in this match, though notice the concentration in the far left corner of Atalanta's defense. 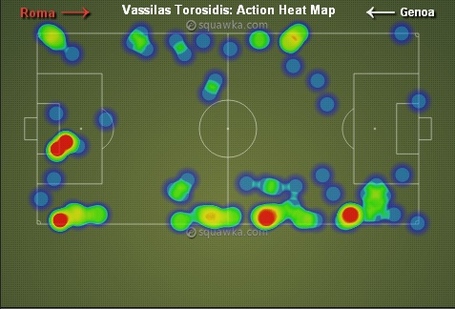 He was all over the map in this one, but again, notice the concentrations on the forward wings; he also did quite a bit of defending in this match.

Although his versatility has not been fully exercised yet, his first hand full of matches have shown an ability to cover vast areas of the pitch, particularly driving the ball to the corners and in the case of the Juventus and Genoa matches, he also made more central runs towards the penalty area.

To accurately calculate the force imparted from Torosidis' foot to the ball, we need to incorporate impulse-momentum, Newton's second law of motion, meters, meters/second, kilogram-force, wind speed, drag and a host of other factors you probably vaguely remember from Physics 101. However, Torosidis is nearly six feet tall and checks in at 80 kilos, suffice it to say, he can bring the heat.

So let's just take a look at his raw shooting statistics, to the extent they exist. Torosidis has only taken two shots so far in his Roma tenure, though both were on target and one was good for a goal.

Accurate Service from the Flanks, or Passing in General

First the good news, Torosidis is second to only Francesco Totti in terms of crosses per game, averaging one per match. Now the (somewhat) bad news, he's completing only 19% of those crosses.

Taking a look at Roma's heaviest crossers, we see that Torosidis lags well behind Miralem Pjanic (32%) and Ivan Piris (29%), though he is keeping pace with Alessandro Florenzi (22%) and Francesco Totti (20%), while staying ahead of Federico Balzaretti (15%). For a broader reference, the league leader in crosses per match, Fiorentina's Manuel Pasqual, completes 25% of his crosses, while the runner up Alessandro Diamanti completes 23% of his attempts from wide.

Keep in mind, however, that what constitutes a "successful/accurate" cross can be influenced by defensive positioning and one's teammate's simple ability to successfully trap/settle the ball. So while you can and should take these with a grain of salt, Torosidis hasn't been up to snuff in this regard, in terms of the percentages, at least. He has been providing consistent service from the wings, which is his job, after all.

Overall, Torosidis is completing approximately 75% of his passes (20th on the squad), with an average length of 18 meters, while managing only one accurate long ball, one key pass/chance created over 109 total passes.

Once again, this is an incredibly small sample size, but the early returns leave much room for improvement. Though to be fair, the team's passing percentages as a whole have dipped below 80% on several occasions during the AA regime, so he's hardly been a drain on the passing game and he has, as we mentioned, been providing ample service into the box.

At 27-years old, Roma nabbed Torosidis at the perfect time, as he's just entering his prime years. With a contract that pays €400,000 a year through 2015, with an option for 2016, Roma should get the very best of Torosidis at a relatively cheap rate.

How and where Torosidis is utilized going forward is obviously dependent on who is calling the shots, but throughout his career, Torosidis has proven to be a versatile and solid two-way player, so we should expect no less.

Quite frankly, given how often they change coaches, having a player as versatile as Torosidis isn't even a luxury, it's a necessity.