They're readying to storm the compound.

So much to say, so little ability to care. The whole Twitter countdown thing became entirely transparent after it hit -4 or so, and today the lid was blown off: new "brand identity". Or new logo. Whatever. It's very, err, modern? No, that's not what I'm looking for. The logo is lacking in....I don't know. Everything? It's rather...

It is an aesthetic abomination.

No, this isn't a matter of opinion: it's bad. Really @#$%ing bad. There's no other word for it. It is, by far, one of the most hideous club logos I've ever seen. It looks like a seven year old dropped some Roman-inspired Clip-Art over a two-tone shield and hit the font button. Look at the children. Look at the whole she-wolf image. Is it complete? Is this just a rough sketch? What? I mean, I dislike Roma's colors in general, but this is something else. Everything one would expect from American ownership - very NASCAR-ish. It doesn't ooze class, though neither does Roma these days, so hip hip for symmetry. Maybe they'll update it every few years? Something brilliant if they're in the CL three years running, this when they've massively failed expectations over two campaigns, and MS Paint when relegated.

Bren may have nailed it best: "It's just terribly generic."

However, the problem is how they announced it. For me, anyway. The wording. Just... 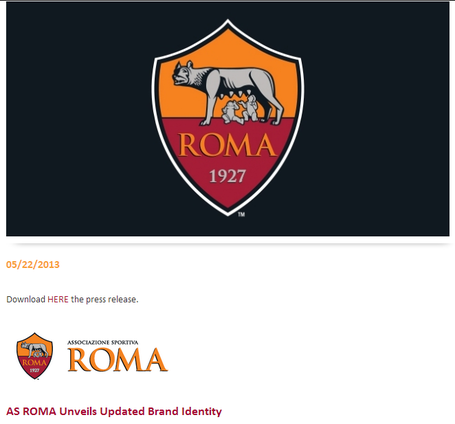 Welcome to Brand Roma™. The laundry's decent, you know.