Didn’t see that one coming ey? Since Roma-Chievo is being played tomorrow (Tuesday), we at Chiesa have peacefully agreed I’d put forward my weekly blog to Monday. So you guys don’t get lost in all the previews, reviews and stuff. Why? Because 1) I frikkin’ love Marco Motta’s defensive talent and 2) we at CdT care about you and your health (which is a contradiction because supporting and informing about Roma is nowhere near healthy business). Onwards and upwards ladies!

First a little warning (see, there you have it): In case you're a normal person, this post contains severe schizofrenic material, not for the weak of mind and faint of heart. If you're a rookie Roma fan, hold on to your pillow and stay away from all things sharp and deadly. If you're a veteran Roma fan, please sir go right ahead!

See, I'm usually not your average schizofrenic guy from a middleclass European village but before Fiorentina-Roma, this was literally me and my brain having a conversation. Enjoy... I think.

Me: Nice, I'm digging Roma's new purple kit!
Brain: Shut up dumbass, that's Fiorentina. Roma plays in white.
Me: For real bro-brain? Look: Aquilani, Pizarro, Lupatelli, Toni all in purple.
Brain: Ow yeah, so which color does Totti wear?
Me: No way, white? But that's Roma old colors right? Look, our coach Montella is talking to Pizarro, giving instructions. Haha, you don't fool me brain!
Brain: Nope, they're all as purple as Prince choking on purple Skittles and M&M's.
Me: I don't believe you.
Brain: Really? Aquilani's stats this season: 7 goals in 24 games, not exactly Roman figures are they?*
Me: But, but, but, what about Prade in the stands? He's still Roman right?
Brain: Sorry bud, he joined Fiorentina in 2012 after Sabatini replaced him at Roma.
Me: What happened to Montella? He coached Roma after Ranieri got fired, I'm 100% certain!
Brain: He was shown the door and was replaced by some Spaniard, can't recall his name, Enrique (ch)Inglesias or something like that. He only lasted one year in Italy.
Me: There! Osvaldo, Lobont and Balzaretti are in white! They're from Fiorentina right? They all play for the Viola, I'm 100% certain!
Brain: They DID. Lobont joined Roma in 2009 and is highly underappreciated. Osvaldo and Balzaretti joined Roma in the Summers of 2011 and 2012 for a combined one billion dollars.
Me: No way. So you're telling me my whole life was a lie?
Brain: Congrats dude, you've been Punk'd!!!

*Alberto had nine goals in 100+ Serie A games for Roma.

After the conversation I had nightmares of Ashton Kutcher peeping out from underneath my bed sheets (for the love of God, why not Mila Kunis?) and playing Charlie Sheen's role in the sitcom Two and a Half Men. Weird stuff right? Anyway, back to football.

Hattrick hero Osvaldo started in a 4-2-3-1, Bradley alongside DDR in the centre. On top of my head, I can think of three better alternatives on Michael's position for that formation. DDR flourished with Pizarro behind him in that formation. Bradley is no Pizarro, he's a loose dog who can give a decent pass and annoy other midfielders. Florenzi's a tireless runner as well so all three of them is a little too much, Roma needs more playmaking fellas like Taxi or Pjanic. They would have been better options to counter Montella's side but anyway, AA makes the decisions here. Our defense (including keeper) looked rather old on Saturday: 35, 27, 32, 26 and 31 but they got the job done until halftime. Both sides created little, Fiorentina had more possession but stats don't win you games. 0-0 was the logical halftime result. Cuadrado was a real pain in the ass though while our midfield, as always, seemed out of sorts. Bradley and co gave away too much space.

90% of Roma's second half was below par while Fiorentina non-stop assaulted our goal, Vincenzo even threw in a tank (Toni) but our defense stayed concentrated while Goicoechea made us forget Lobont and made a fine save on Ljajic' shot. Totti and co barely set foot on Fiorentina's half and Pizarro and Jovetic hit the woodwork as well. Not to mention a 100% penalty denied after a DDR handball in our box. At one point, I was looking for Mazzoleni's Roma crest on this shirt, we were very lucky with him as ref. Even though Goicoechea would have saved that peno 9 out of 10, duh.

So that's roughly three obvious purple goals Roma escaped from while Osvaldo was too selfish and squandered a Roma chance on the counter. The Giallorossi however sealed it in the closing minutes with an Ozzy header from a Pjanic corner. Bonnie and Clyde would be proud of such a highway robbery. I felt kinda sorry for Vincenzo but this feels so sweet, beating Fiorentina for a third time this season.

On the other hand, it makes the Pescara draw even more painful, those two extra points would have been very useful right now. Especially with Milan-Roma next weekend. May's schedule looked like Mount Doom for Roma but they started on the right foot on their way to Mordor, keep the momentum going boys. Ow and a bit Destro and less Bradley wouldn't hurt this team too.

The Bloody Mary award: Lobont. A cat has nine lives, I guess Lobont after Fiorentina now has eight.

The Ranieri award: Andreazzoli. For the ‘Hos-Florenzi sub. That was some nice tinkering and a smart move. My first initial reaction was: ‘Wait whuuut?' I thought Aurelio was banking on a draw but then it hit me: the 4-2-3-1 transformed like Optimus Prime into AA's old 3-4-2-1 with Hos, Nico and Castan at the back, pushing both Torosidis and Balzaretti higher and enforcing midfield. Roma came back into the game and eventually won the damn thing too. Kudos Aurelio.

• If there's something strange, in the pastures down Rome, who's Lazio gonna call? That's right: 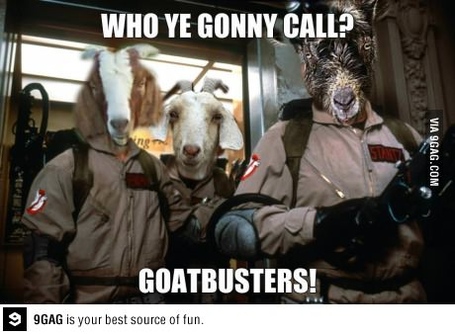 • Both Milan and Roma have officially denied any talks between them concerning Allegri's move to the capital. So I guess we all now know what this means: It's a done deal. C'mon, this is Serie A, it's Comedy Capers x1000.

• In case you missed out in the comment section, this is currently my favorite Roma-related site. So much win.

Heads-up! Flying Donkey ahoy! Roma-Chievo is a midweek game so we won't have to miss Roma that long. Should we be glad about that? Could we file this under sadism, the desire for pain, cruelty and despair in a short period of time with alcohol intoxication as an immediate result? Are there places on my body that aren't mutilated yet by me after watching thrillers like Saturday? ... Well I can think of one manly spot somewhere below which is known to be sensitive when near nudity or huge big brea... whoopsiedaisy, my oh my look at the time! I'll see you next week chaps!

"I don't know my limitations, but there is one thing I know perfectly well: my character. I believe in the objectives that I set for myself. Football is wonderful because it always reserves some great surprises." - Francesco Totti, 2013