Italy and Spain square off in a rematch of the Euro 2012 final. This time around, the stakes are a place in the Confederations Cup Final against Brazil. Without Balotelli, can Italy muster up enough offense to break through Spain's midfield?

Italy enters Thursday's matchup against their most recent of nemeses, Spain; the rulers of this earth, this realm, this Europe. They're also a nation against whom Italy has only one victory in their past six encounters. Confronting the bane of their existence was always going to be difficult, but without Mario Balotelli, who is both out of the tournament and the country altogether, and with Andrea Pirlo dealing with maladies of his own, the task is made harder still.

So let's take a gander at the latest installment of what is fast becoming one of the world's great rivalries.

It was nearly a year ago, but La Roja put dealt a crushing blow to Italy's somewhat improbable Euro 2012 run, dominating the Azzurri in a 4-0 thrashing, thanks to goals from David Silva, Jordi Alba, Fernando Torres and Juan Mata.

Despite Vicente Del Bosque recently saying Italy was superior that night, it was an ugly loss for the Azzurri and an historic triumph for Spain, capping off a Euro-World Cup-Euro trifecta for the Iberians. 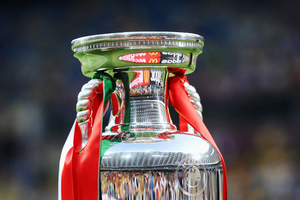 Have you conveniently forgotten about last summer's loss to Spain? If you can stomach it, relive it here.

It was ugly, but if you're the masochistic type, check out our recap of that humiliation.

How They Got Here:

Spain swept their way through group play, besting Uruguay, Nigeria and (gasp) Tahiti. All told, Spain outscored their Group B compadres 15-1. Granted ten of those goals came against Tahiti, but La Roja has shown no signs of slowing down and might have the necessary machismo to add a fourth consecutive cup to their mantle.

Meanwhile, Italy meandered their way to the semi-finals by finishing second in Group A, taking six of a possible nine points to finish adrift of Brazil. While undoubtedly in the tougher group, Italy finished dead even, scoring and conceding eight goals.

But if we're being honest, Brazil was always win the group stage.

What Do The Numbers Say?

It's only an eight team tournament and they've only played three matches apiece, but what the hell, let's take a look at the statistics.

Spain holds the edge over Italy in possession, which shouldn't come as a surprise. What his shocking, however, is how poorly Italy has possessed the ball. Prandelli's posse is possessing at a 47.2% clip, better than only Uruguay and Tahiti. Again, we're talking about three matches here, one of which was against Brazil senza Pirlo, but something's been amiss with Italy the past ten days or so.

Possession aside, neither nation has been shy when it comes to scaring keepers, with La Roja averaging 22.3 shots over their three matches, good for the tournament lead, while Italy's 14 shots per match is good for third. Individually, Balotelli's 14 shots are a tournament best, with Pirlo's 9 clocking in at third, while Fernando Torres falls in between the two Italians with a dozen shots of his own.

Spain has completed 92% of their passes, dribbled past their opponents 10 times per match, scored 10 goals from the run of play and four on the counter; better than Italy in each of those respective categories.

I'll reiterate, the scope of this data is only 270 minutes of match play, and for Spain 90 of that was against a severely overmatched Tahitian side, while Italy had the misfortune of facing the host nation without their best midfielder.

Perhaps because of that 10-0 dressing down of the French Polynesians, Spain's defensive numbers stand a cut above the rest. Del Bosque's crew has choked opposing offenses, allowing only six shots per match--which should help explain why they've only allowed one goal.

For their part, Italy has conceded 16 shots per match, second most in the tournament, while Giorgio Chiellini and Daniele De Rossi are among the tourney leaders in tackles and interceptions, respectively. However, for the first time in ages, there appears to be some cracks in the Italian armor. With Chiellini, Barzagli, Bonnuci and Buffon, as well as Pirlo and Marchisio, accounting for over 300 matches played this season, age and attrition are starting to take their toll on Italy's once vaunted defense.

Beyond the sheer exhaustion on their faces, their quality of play has dipped in this tournament, particularly Buffon. Gigi's steadfast fingers have let eight goals slip past him, three of which stemmed from his own errors. But given how great he's been in World Cup Qualifying, I'd chalk it up to fatigue, albeit ill timed fatigue.

That's about it for the statistics; like I said, it's a short tournament. But what little we can glean from the numbers comes as no surprise; Spain possesses at all costs and relies on his fine-tuned passing game to open up channels of attack for the Davids (Villa and Silva) and, somewhat surprisingly, Fernando Torres.

Italy, on the other hand, has grown increasingly dependent upon Mario Balotelli's combination of brash and brilliance. With Mario's injury removing him from this match, and with Stephan El Shaarawy dealing with his own minor injuries and dip in form, Italy suddenly finds themselves in a bind, with no proven international scoring threat to count upon.

While Spain will trot out their tried and tested 4-3-3, Prandelli, due to the absence of Balotelli and Abate, has been experimenting with a three man backline, a three man Juventus backline to be precise, with Chiellini, Andrea Barzagli and Leonard Bonnuci fronting Gianluigi Buffon in this experimental 3-4-2-1.

The (hopeful) recovery of Andrea Pirlo and the catch and release of De Rossi into the wild gives the Azzurri a strong central core around which to build. The '06 holdovers figure to be flanked by Emanuele Giaccherini and Christian Maggio in the wingback slots.

The burden of filling Balotelli's shoes falls to the feet of Alberto Gilardino. With six goals in his past 10 caps, Balotelli's absence is an enormous loss, as big as any nation could endure at this point, so the onus on Gilardino is grand.

So I suppose it's my unfortunate duty to tell you that Gila has but two goals in his last 10 caps, finding his way on the pitch for all of four minutes during World Cup Qualifying. On the brightside, he did manage a respectable 13 goals for Bologna this past season. So despite his disappearance from La Nazionale, his domestic record is still surprisingly solid, a fact not lost on Antonio Di Natale. Toto, while also pining for his own return to Gli Azzurri, pledged his solidarity to Gila.

Of course, whatever success Gila may or may not find is wholly dependent on the service and support he gets from Claudio Marchisio and Antonio Candreva, should Prandelli indeed opt to round out his starting XI with those two. But with Pirlo and De Rossi returning, the Italian midfield should have enough flexibility and cover to operate somewhat effectively, provided they can actually corral the ball away from the Spaniards.

That's really the long and short of it, Spain is the world's top ranked team for a reason; their players are running roughshod in their respective domestic leagues, while La Roja the collective are gunning for their fourth successive major trophy (for the basis of this argument, we'll call the Confederations Cup "major"). The funny thing is, though, there isn't anything terribly Avant-garde (or its Spanish equivalent) about the manner in which they win; you know the blue print, yet you can't deconstruct the machine.

For Italy, it's less about contemporary legacies and more about circumstance. Injuries and suspensions have dictated a patchwork lineup to Prandelli, forcing Italy to rely on a respected, yet inferior replacement at forward and relatively experimental formation behind him.

While the Confederations Cup isn't really part and parcel to anything, if the losses continue to mount, Prandelli's vow to change the face of the Azzurri will fall by the wayside, bending to the will of an Italian populace desperate for victory, aesthetics be damned. And while the Confederations Cup resonates little beyond the two weeks in which it's contested, the patterns on display and the insights developed can be quite telling.

For those focusing on Prandelli and Italy, their concerns will surround what he values more: form or function, history or progress.