What Does Mehdi Benatia Bring to Roma?

While his nearly €14m transaction got lost amidst the fray of rumors last week, there may be no transfer more important for Roma this year than that of Mehdi Benatia. So what does the newest Roman bring to the table?

Share All sharing options for: What Does Mehdi Benatia Bring to Roma?

With Marquinhos' seemingly imminent departure, it only makes sense that we take a look at his nominal replacement and Roma's newest recruit, Mehdi Benatia. As most of you know by now, Benatia came to Roma to the tune of €13.5m and parts of Valerio Verre and Nico Lopez, but what does nearly 14 million Euro's buy today's on-the-go, hustle and bustle football manager?

Mehdi Amine El Moutaqui Benatia hails from Courcouronnes, France, but represents Morocco at the international level and came up (for the most part) through the Marseille youth system, having spent several loan spells at Tours and Lorient before eventually finding his way to Udinese in 2010 on a free transfer. We've talked a lot about potential profits the past ten days or so, and what Udinese just managed was a master stroke--netting nearly 14 million off player for whom they paid nothing, while also snaring parts of two of Roma's finest youth products.

Benatia, 26, stands at or near 6'4'' and checks in at nearly two-bills (that's 200 lbs for those of you not familiar with American colloquialisms), instantly making him Roma's most massive player-Big Walt just snagged himself a whole lotta man is what I'm getting at, but beyond bulk, what does Benatia bring to the table?

With 80 Serie A matches and nearly 7,000 minutes under his belt, Benatia is well versed in Italian football, so he's no stranger to the fashion forward hair styles, excitable yet respectful fans and impartial officials of Serie A. Perhaps more than any recent transfer, Benatia's transition to Roman life should be minimal, well on the pitch at least...hell on his first day with the club, one of his teammates may or may not have flashed his Pablito at a group of fans.

I have arrived in Rome with the desire to win -Benatia

All kidding aside, you should be excited about this purchase. Cost be damned, Benatia is, pure and simple, one of Serie A's best defenders. (Requisite caveat: Benatia only made 19 appearances this season)

Getting His Nose Dirty

Across those 19 matches, Benatia showed little reticence when it came to facing attacking players one-v-one. Benatia's 3.5 tackles per match in 2012-2013 was good for 11th in Serie A, but when you limit the discussion to full time defenders (those who strictly play in the back four), Benatia's average rises to fourth, if you limit it even further to center backs, he's tied for second. And for a league like Serie A, where central defenders don't press all that high, it's an impressive stat. For comparison's sake, Marquinhos averaged two tackles per match-again, it's a stat that subject to several factors outside of a player's control, but nevertheless, Benatia was one of the league's most active central defenders; though to be fair to Marquinhos, his tackling success rate was a sight better than Benatia's (84% to 76%).

There's no telling how his tackling numbers, both total and precision, would have fared with another 10 games or so, but what he showed this season was a willingness to do the dirty work, to use his size and agility to invade and shrink his opponents attacking space.

While you have to give his genetics most of the credit for this one, Benatia won 74% of his headed duels, which is exceptionally good. But, if you're a basketball fan, look no further than Andrea Bargnani's pitiful rebounding numbers to see how size isn't everything, you need the desire and spatial awareness to win aerial duels at that clip. As they say, you can't teach size, but knowing how to use it effectively is a different ball game, one in which Benatia excels.

Here is where Benatia, statistically speaking, really shines. This past season Benatia's 3.8 interceptions per match ranked second, one tenth of a point behind league leader, Neto. His 7.5 clearances per match left him tied for 13th in the league. What these two simple stats tell us is that Benatia does more that occupy space in his defensive third; rather he has the vision and anticipation to decipher and interrupt an opponent's attack, and the presence of mind, agility, and tenacity to stick with a play and remove the ball from the final third. Two fantastic qualities that, when coupled with his massive size, gives Roma an intelligent and intimidating presence on the back line.

But it's not all sunshine rainbows when it comes to Benatia's defensive numbers. Benatia, at least across his 19 appearances last term, wasn't terribly adept at drawing opponent's offsides. While this is partially a product of Udinese's tactical approach, it is a subtle skill that does offer advantages, sometimes game changing one's, to a squad week-in-and-week-out.

While it's not worrisome, per se, Benatia's record of blocked shots is quite peculiar, particularly for a man his size. In 19 matches Benatia managed only seven blocked shots, leaving him well, well off the league pace. While you can possibly make the argument that his tackling ability means his marked man seldom gets off a shot, for a man of his stature, you'd hope he'd throw his frame in front of a few more shots.

But across the board, Benatia's defensive numbers this past season--again, only in 19 matches--were spectacular, so rather than gloss over it, it's fair to mention his minor deficiencies, namely offsides drawn and blocked shots, which, if we're being honest, were in his control to varying degrees.

If you're relying on your centerback to be an integral part of your offense, you're probably in for a long season, but Benatia's size, stamina and relative pace does give Rudi Garcia an interesting toy to play with. Looking at the black and white of it, Benatia banged home two goals and dished out one assist, while completing 82% of his passes, managing 2.3 long balls per match and creating two scoring opportunities.

While he's generally listed as a centerback, Udinese utilized the three man backline for much of last season, with Benatia featuring on the right side. If you'll permit me to randomly choose his best performance of the season as an exemplar, have a look at how much ground he can cover and what he's capable at his absolute best. 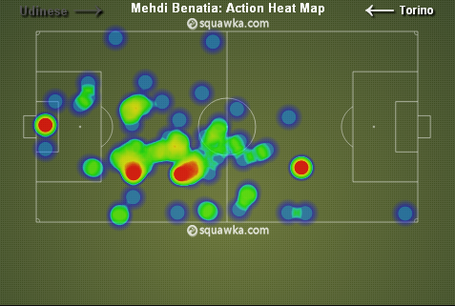 It's not so much the ground he covered laterally in this match, but look at the variety of hot spots ranging from his own six all the way to about 30 yards or so from the Torino goal. What this shows is that Benatia was in the thick of the hunt in this match, serving as both the last line of defense and pressing the Torino attack as soon as it crossed the center line-in fact, four of his five clearances in this match occurred outside of Udinese's final third.

Offensively speaking, Benatia completed 91% of his passes in this match, and even managed a successful dribble. So while no one should confuse him with Franz Beckenbauer, he certainly has the ability the move up the pitch, not only pressing opponents, but being an active contributor in the passing game.

Generally speaking, the greatest gift he gives to Garcia's offense is his size, particularly when it comes to set pieces, but overall his passing leaves a little to be desired, especially when compared against Leandro Castan and Marquinhos. Which, given Roma's always questionable full back situation, could be worrisome, particularly if Garcia trots out any variation of the three man backline.

Speaking of comparisons, here's one...

A Replacement or Reinforcement?

If we wake up September first and Marquinhos is still a Roma player, then the Giallorossi suddenly find themselves with an incredibly impressive trio of central defenders in Benatia, Castan and Marquinhos, even Nicolas Burdisso is capable of getting the job done in small doses.

But is that what we're getting here, or is Benatia, and has he always been, a replacement for Marquinhos? And if so, what's the opportunity cost of that choice?

Let's break it down chart style, given that Marquinhos made seven more appearances, we'll use per match stats: 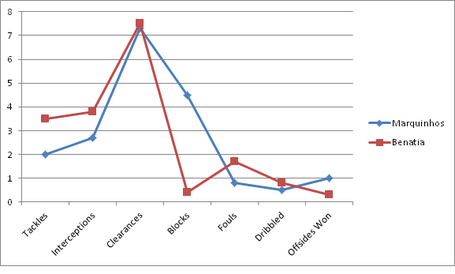 As you can see, they're fairly close in many areas, with the only real gulfs being in blocked shots (in Plurals favor)and tackles (Benatia), but also keep in mind we're comparing a 19 year old with no prior league experience to a 26 year old with over 60 appearances under his belt at the season's beginning, which is really more a compliment to Marquinhos than a slight to Benatia.

Though not included in the chart, their offensive statistics were equally similar, with two exceptions--Benatia's two goals and one assist besting Marquinhos' blanking in those respective categories. But Marquinhos did top Benatia in passing, maintaining a higher percentage (89% to 82%) while nearly doubling Benatia in long balls played (4.5 per match to 2.3) and tripling him in key passes (0.3 to 0.1). Like I said, Benatia's passing is an area of deficiency, particularly compared to Marquinhos.

Bringing Benatia Into The Fold

Whether he's an alternative or an ally to Marquinhos is essentially irrelevant, Roma's biggest purchase of this summer (thus far) may prove to be one of its best. What Roma has (for now) with Marquinhos and Benatia is two of Italy's best central defenders, so if ‘Hos does indeed take his act to Catalonia, they're still left with an exceptional replacement.

But when we speculate about Kevin Strootman and Christian Eriksen, we're talking about nearly €40m in potential new costs, so that financing has to come from somewhere and there may be no hotter prospect on the global marketplace right now that our very own Marquinhos.

So whether its €30m or €35m, the die appears to have been cast, Marquinhos isn't long for Roma. While it's sad to some, making a potential 700% windfall is just good business, particularly when you've got a replacement player as capable as Benatia.

So while he may never engender the same sense of pride of feeling of discovery as Marquinhos did, Benatia is a hell of a player and one upon whom Roma can and should bank.