Stroot Suit Riot & Give Roma Your Tired, Your Poor....Fullbacks

Share All sharing options for: Stroot Suit Riot & Give Roma Your Tired, Your Poor....Fullbacks

A change in ethos is afoot. Not only have the children made way for the mentally strong, experienced, and perhaps a little bit cold-hearted - oh Maicon, you ice princess, you - but the schism between the last two years and the post-Franco Baldini era (2.0) are too alarming to ignore. It could be coincidence, and it very well might be, but this is a club which has gone from Lamelas y Dodos (it's like the poor man's Zidanes y Pavones) to snapping up established veterans and laying out 17m + 2 for past and future Oranje captain who, while skilled, plays with a bit more bite than the uber-technicians once constantly linked. Walter's shopping in Europe these days, and he's lovin' it. You should be too.

Update: It is official via PSV. 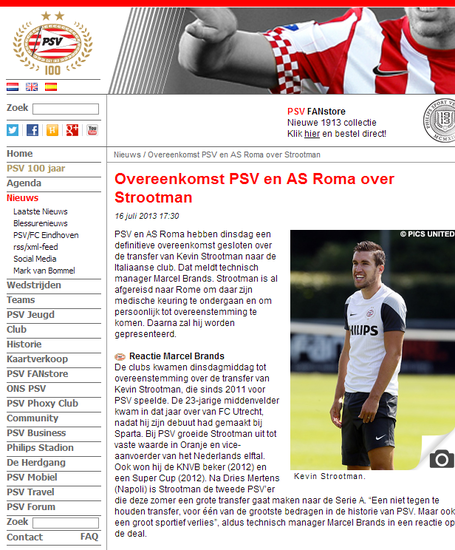 The journalists of Rome are spending so much time at the airport these days they're all beginning to feel like the Italian Tom Hanks. Kevin Strootman lands today for his medical, fresh with a request of 17m euros from PSV plus bonuses; one hopes bonuses such as the Champions League football which is still at least two years away. (Sabatini might be having a busy summer, but so is everyone else: Juve is Juve, Milan is improving, Mazzarri fits Inter perfectly, and Daniele Prade is still @#$%ing running Serie A right now.)

The flight is Alitalia flight AZ109, landing at 7p local. Go get you some big Dutchman. This one better than the last, hopefully. And while he is not your standard regista - a little bit more grunting than all that - cross that need off the list. Roma has its midfielder who can control a match with his passing and thread a mean ball while giving up nothing on the back end. Though 17m is a lot of cash for a club in financial difficulty and zero guarantees of Europe, this is a fantastic signing given what they so desperately need on a footballing level. He is the polished, guaranteed version of Taxi's potential.

And someone throw Thiago Alcantara a cookie, too. The delay in his choosing Bayern kept Manchester United away from Strootman long enough for Walter to poach him. The Thiago deal should be your second favorite of the summer.

Taking This American Thing A Little Too Far

Roma's linked with Patrice Evra. The Statue of Liberty approves of what's happening with these fullbacks right now.

While it's not as though Walter & Franco had been robbing the cradle exclusively - Federico Balzaretti, Gabriel Heinze, etc. - there is most certainly a new mantra in town. Yes, they paid 5m for Timmy (Yedvai, but he'll always just be Timmy), but signings like Maicon, De Sanctis, Strootman, and Benatia cast an eye toward the mental side of the game. These are your Taddeis, your Perrottas. They're not taking big money stabs at the precociously talented wunderkids from yonder South America. Erik Lamela worked out brilliantly. So too did Marquinhos, though that was more an unexpected winning lotto ticket. But this new crop? Closer to guarantees. Closer to the necessary experience. Closer to the mental fortitude required to challenge and challenge right now. They are all, to a man, international veterans - even Strootman has eighteen caps for the Dutch juggernaut at only 23, and has already worn the Dutch armband. Maicon may be a caricature of his former self, but the man knows how to play and how to play in Serie A. Ditto for Mehdi, who was the best defender in Serie A the year before last and is just now entering his prime. Begin adding names to the list of recruits like Evra instead of the unknown [insert name here]inho and the tides of Roma are shifting. Shifting closer to winning today rather than cultivating a steady stream of income via the sales of youth tomorrow.

Personally, I would like nothing to do with Patrice Evra. Ever. The same can be said of nearly anyone placed at the center of that Les Bleus debacle. But as a mold for the current crop, it is both the type of purchase they need - particularly if it means shuttling Dodo off on loan to someone with a giant pasture where he can push the ball ahead fifty yards and run after it continuously - and the shift in philosophy demanded of a team participating in Serie A right now. There is a happy medium to be found somewhere among the established veterans with more left in the tank than Gabby Heinze, and while the children are gifted, the adults know what to do with the regressing gifts they have remaining. They've begun treating the pitch and locker room with the same care and concern as the brand image, and it's about time. The term "champions" finally comes to mind.

That said, your established international fullbacks on the downslide? Roma wants 'em. Balzaretti, Maicon, Evra...looks like Walter's got a new fetish.

Buh-bye. Thanks. Defenses are built on structure, not individual talent. Clubs like PSG and Barcelona can build great structures with collections of great talent; AS Roma cannot. Show 'em the money.