Barca and PSG to Make Mega Offer for Marquinhos?

Marquinhos has certainly made an impression on the illuminati of the footballing world, with his price tag reportedly soaring over €30m--a price reserved for the world's heavyweights, Barcelona and Paris Saint-Germain.

Share All sharing options for: Barca and PSG to Make Mega Offer for Marquinhos?

You didn't expect the stream of utter non-sense to stop just because its Saturday, did you?

Depending on where you're reading this now, we awoke to news that Paris Saint-Germain and Futbol Club Barcelona have upped their respective offers for our manchild, Marquinhos. Taken together with Mehdi Benatia's imminent arrival and Leandro Castan's reaffirming his intent to honor his contract, some interesting and worrisome dominoes might be falling into place.

Although any squad worth its salt has at least three starting quality centerbacks, you never got the feeling that Benatia eschewed Champions League squads to come to Roma and sit behind Castan and Marquinhos, so the speculative pessimist in me has allowed this thought to creep into my brain.

What if the Benatia move preordained a Marquinhos sale?

In other words, perhaps Roma always intended to strike while the iron was hot with their young centerback. And at the rumored €25m price tag, Roma would make a tidy 500% profit on their 19 year old centerback; a figure that could increase exponentially if Barca's latest offer of €32m is to be believed. However, one needn't look any further than last year's De Rossi rumors to see how quickly speculation can tear a player's value asunder. With PSG, Real Madrid and Manchester City reportedly offering northwards of €30m for De Rossi last summer, all it took was one suspect season in Rome, even though it was buttressed by another spectacular summer for the Azzurri, for his market value to effectively crash--all the way down to the €15m figures mentioned in the Chelsea connections.

Now, Marquinhos' is only 19 and any number of things can happen over the next few years. He may very well be the world's best center back in due time, but how much higher is the world willing to go on a central defender? Can Roma rake in more than €40m, a level only exceed by the sales of Rio Ferdinand and Thiago Silva? That's an awful lot to pay for anyone, let alone a central defender, and is a figure only a handful of clubs can even afford to discuss.

On the flip side, sports are littered with one year wonders, players who burst onto the scene, seemingly out of nowhere, taking the world by storm only to never reach those same heights. I'm certainly not saying that is the case with Marquinhos, but for a club on the outside of the European party, there has to be a price at which they cannot resist.

Were they to sell Marquinhos, the defense would not suddenly be in shambles, as Castan and Benatia are both above average defenders. So, much like everything with this club since the American takeover, every sale, every loan, every purchase and every organizational decision is both a litmus test and a glimpse into the future-we still don't truly know how James Pallotta intends to run this club year-in-year-out.

The summer of Enrique saw a spending spree (by traditional Roman standards), with big and semi-big money deals for Pablo Osvaldo and Bojan, among others, while last summer was largely focused on rotational players like Michael Bradley and speculative purchases like Marquinhos and Castan, though those obviously pay dividends.

The point being, we're only two years into this project, and as much as Pallotta blusters about want Roma to dominate the world, the track record is still too short. Does his reach exceed his grasp, is he all bark and no bite? Is he in this for personal gain or does he truly want Roma's footballing legacy to be as grand as the city itself?

The question we have to ask ourselves is this--are the world's top clubs the breeders or buyers of stars? 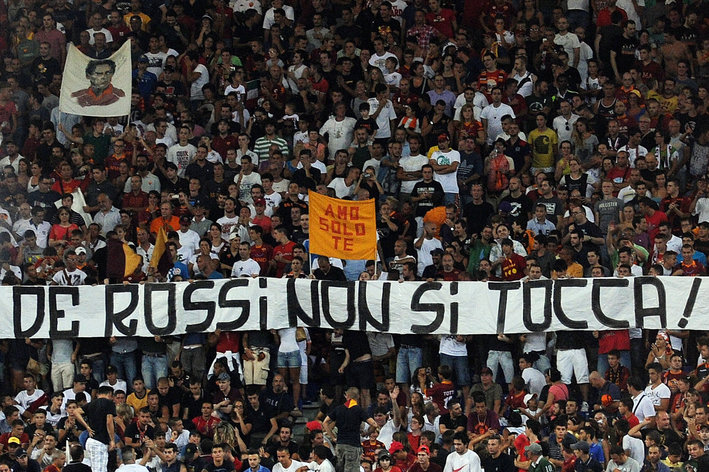 Although the rumored price tag has dropped significantly, we can still ask ourselves the question: Should Roma sell Daniele De Rossi?

Elsewhere in Roma rumor land, stories (and that's all they appear to be) of a Daniele De Rossi-for-Marco Verratti swap are making waves early this weekend. The knee jerk reaction goes two ways: 1) No chance in hell Roma should sell De Rossi or 2) Verratti is the exact type of player this club has needed for the past few seasons.

While we can quibble about the need for a true regista in Rudi Garcia's system, Verratti is only 20 years old and there are solid odds that the new tires you just put on your car will last longer than Garcia's stay in Roma, given their recent track record with managers. The prospect of adding a player like Verratti, much like yesterday's newsmaker, Miralem Pjanic, is too tempting to turn down because of your current managers tactical preferences.

But back to De Rossi-at this point, and facing the prospect of "losing" more than €20m from last year's market value, the only sale that would make sense would be one in which you get back a young, talented, and contractually controllable asset. But if all Roma can manage for a player of De Rossi's quality is €15m cash-only, they'd be foolish to sell him. So is the allure of the young and supremely talented Verratti enough to tempt Roma?

We shall see, either way, until De Rossi and Garcia hash things out, these rumors don't figure to subside.

So that's the news for this Saturday, with Benatia inching closer to officially becoming a Roma player, we should start to get some clarity about Big Walt and Rudi's plans for 2013...hopefully.