On The Phone With Roma Rumors

Share All sharing options for: On The Phone With Roma Rumors

So I'm sitting here doing work. And by work I mean rifling through useless clips of football highlights emanating the globe over whilst the lower reaches of my mind stare at the stack of books and papers to the right of my desk screaming, "BUT I DON'T WANNA." I'm very good at that, you know. Anywhom, a clip of a Brazilian defender pops up. Smashing. Within five seconds of said clip, I have absolutely convinced myself that Roma has not only been linked to him through the vast powers of the interwebs, but also had emissaries sift through his garbage at his mama's mama's in the favelas as Walter Sabatini himself dropped into his bathroom, snapping latex - gloves, you guttural bastids - searching out DNA like he's the Italian Dexter before swooping in for the kill. And by "kill" he means offering 60% of market value to his club in the hopes they'll bite out of desperation and those "coupons" you give a loved one because you can't really think of anything else and they just call them "bonuses and incentives." Roma's killing stroke. Little known fact: Lyon gets a lap dance in lace from Vito Scala if Miralem Pjanic plays 100 matches in giallorosso. Yup. Don't even ask what went down at the Bernabeu after the Cicinho deal. Carlo Zotti still blacks out on Tuesdays and September.

Yet, nary a mention in these digital waters of quasi-reliable information and women taking off their clothes for rent of this Brazilian defender being linked to Roma. Not one. And yet I know in my mind of minds - that might indicate a dissociative disorder; allow me to ease your fears: Blue snorkel eigenvector Snuffleupagus. Yolanda! Cheese. - Roma has been linked to him. Yet The Man is trying to tell they haven't. Well fluff off. They have been linked to every Brazilian, whether or not they have. A'ight?

Thought I'd share. (Yes, there is commentary in there somewhere. Go find it. I left crouton crumbs.)

Genuine news. PSV's director has confirmed interest while reports circulate Roma has bumped their offer to 20m including bonuses (14-17m guaranteed, then the incentives). This would be delightful as Roma so desperately needs a conductor in the meat of the midfield with enough distance between the playmakers at the top of the attack (Totti, Erik, Miralem, etc). Right now everyone's just kicking around a confused baton - Michael Bradley passed it to Slovenia - and someone's going to poke an eye out with that thing.

Nothing, really. Just seemed organic. Thrilled the Gilardino deal has fallen through and there is hope he may stay in Rome. Every club needs a one-man WAG machine. (Not sure why The WAG Machine didn't catch on during his playing tenure in Rome.)

Also, Rudi's a single man, right? And he supposedly requested Borriello to stay?

Mmhmm. Marco's wake of women could turn Casanova rouge. Who's that man in the dingy following just behind the SS Borriello snaring those tossed overboard in his net? I see you, Rudi...

Look, footballers dive. Nearly all of them. Even those you don't want to admit. There are only two players with enough of a personal viewing sample I can honestly say I have never, ever seen dive: Matteo Brighi and Erik Lamela. (Erik's young, thus he has ample time to blood in some cynicism, so fret not.) It happens. It sucks, but it happens.

But between this and Nani, I'm a bit concerned they've decided Serie A is a task too tall and are now compiling a squad to win gold in the pool at Rio 2016.

Come on. Have some self-respect, Roma. 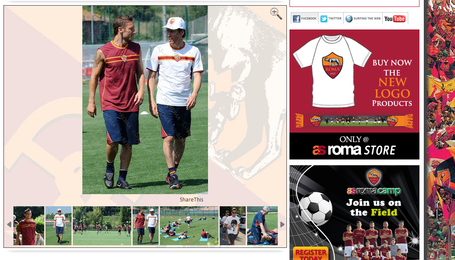 Between this and Philipp Plein, I'm not sure I can root for this club anymore. It's really not that hard, people. And is an actual photo of the new products in your ad so hard? Or is "could be drawn by a child" a new thing I wasn't informed about?

For some people: this happened today. One (well..."one") of the conversations between Sabatini and Fenucci was illegally wiretapped and Roma has reported it to the authorities.

The conversation centered upon selling Marquinhos for any bid over 25m euros. Allow me to reach back to a conversation this weekend:

"If they get a bid of 30m or over, I say they sell Hos. They aren't going to do much better in the coming years (Thiago Silva was 40m or so, right?) and this is not a club which can keep its young stars anytime soon. He'll be sold within 3 years. I think, shockingly, this might be his high point."

Potential is the premium. The allure of what he can be may actually be worth more than what he will be....