With the release of Deloitte's 2013 Football Money League, we take a look at Roma's revenues, asking the question: Has Italy's inward focus inhibited the global growth of Serie A?

Being an Italian, it was only natural to be drawn to Serie A. From there one's choice of teams can be influenced by any number of factors: color scheme, familial history, aversion to stripes or a club's respective taste in tattoos. But what's it like for someone who is not Italian? There seems to be some discontent among Roma fans without Italian blood, a feeling of disconnection, or, at the very least, a sense they're not the preferred audience.

Which got me to thinking, might that be the problem holding Roma and, by extension, all of Serie A back? Is it simply that the names are too hard to pronounce, or is the league too insular, anachronistically hanging onto some notion that the Italian way is the best and only way? Is it glib to suggest that a collection of 20 men willfully ignored the best practices of twenty first century sports marketing? That they somehow looked at the successes of their European competitors and simply shrugged their shoulders, completely flummoxed by the predilections of modern consumers?

Certainly there's no doubt it's easier to brand names like Manchester, Paris, Chelsea or Liverpool than, say, Juventus (which, let's face it, many people probably can't even pronounce) or Sampdoria (do they make pasta?) or Roma (is that the same place as Rome?). But what about the club's collective approaches to marketing, to new media, to international broadcast rights? What do these say about the manner in which Italians approach the modern global marketplace? Could these ambiguities of Nouveau-Economics be the sole reason Serie A has fallen from grace over the past twenty years? Is the nation's struggle with its changing identity emblematic of its football leagues failings in the 21st century?

While that last question is an interesting one, it's probably best saved for another day. But when we're talking about comparative footballing finances, there's only one place to turn...

As they do every year, the folks at DeLoitte provided the world's football finance geeks with a TRL style countdown of Planet Earth's most prosperous football clubs (remember that show? Remember when there was actual ‘M' in MTV?). Putting the cherry on top of our Forbes fantasies, this year they offered an even more nuanced look at the source of these fortunes, breaking down how and where the clubs made their dough into its component parts: matchday, broadcast and commercial revenues. (click here for the full pdf report)

The first thing that stands out, beyond there being only two Italian teams among the world's top ten (A.C. Milan and Juventus, the lone Serie A survivors), is that the rest of the world seems to be onto something Serie A is missing. While harnessing all that Web 2.0 has to offer to expand your brand is a fantastic start, when we're talking about sustained revenue and real growth, it all begins and ends with infrastructure--modern, club controlled stadiums that act as virtual ATMs for their owners; an area in which Italy is severely lacking.

So, for the sake of brevity and also to illustrate this important difference, we'll stick with match day revenue, as there is no way Serie A can compete with the Premiership's £5 billion international broadcasting deal, which will net each club somewhere in the neighborhood of £20m to £30m, while the quixotic nature of La Liga's broadcast rights funnels an inordinate amount of revenue to Barcelona and Madrid. Also, while not quite on the level of Spain or England, German clubs will see a reported 50% increase in their broadcast revenue.

So in his struggle to place Roma in the living rooms of John Q. Everyman, Pallotta is a David among a sea of Goliath's. (Yes, I realize David defeated Goliath, suspend your disbelief for a few moments)

While matchday revenue is seldom a club's most lucrative cash cow, it is the revenue source over which they have the most control.

That is, unless, you own an Italian club.

With Juventus being the only Serie A team to own and operate their own stadium, the gulf in matchday revenue between Juve, Milan and the rest of the top ten is understandable. Let's use Roma's most recent opponent, Chelsea, as an example. During the 2011-2012 season, Abramovich's assemblage of millionaires drew an average of 41,495 attendees, from whom they bilked €96.1m in matchday revenues, nearly €30m more than Juventus and Milan COMBINED.

So Long, Serie A? 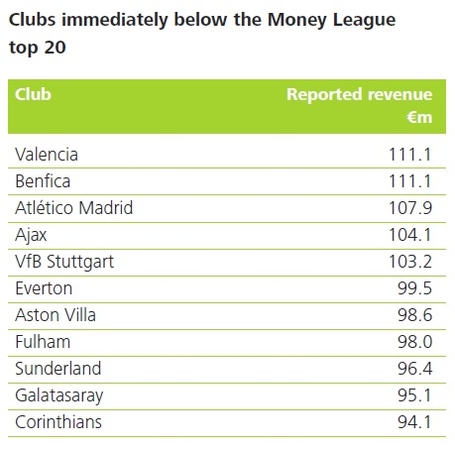 With the remainder of the Top 30 featuring zero Italian clubs, the future looks bleak for Serie A

While Juventus will undoubtedly become more adept at wringing a profit out of their new digs, the situation is clear; in terms of infrastructure, Italians are missing the boat.

So, if you're clamoring for that fourth Champions League spot, do yourself a favor and don't read the rest of that document. While Milan rakes in a respectable €96.8m in commercial revenue, Italy's dynamic duo fall well behind the rest of football's super elites in terms of commercial and broadcast revenue streams. (Seriously, though, read it, there's far more detail than I could cram into this nearly 2,000 word tome)

To make a long story short, Italy has, for all intents and purposes, brought a knife to a gunfight.

Okay, that's great. What about Roma?

You sure you want to go there? Are you absolutely sure?

Roma averaged 37,924 fans during the 2011-2012 season, resulting in a paltry €14.7m in matchday revenues. Given that the Stadio Olimpico can hold nearly 70,000, not to mention the general lack of hospitality among the more passionate fans, this figure isn't surprising. And we haven't even mentioned the absence of those oh so lucrative Champions League home matches. How else could you explain Roma's increased average attendance but decreasing matchday revenues?

Those midweek matches sure go a long way to keeping a club in the black, that's for sure.

But Roma is still standing, so just how bad is it?

Well, Roma checked in at 19th in this year's Football Money League, but in terms of matchday attendance they were last. Dead last.

The picture was not any prettier in terms of commercial and broadcast revenue, either; with Roma ranking in the lower third in both categories. For the full picture in pie form, I'll refer you to the graph below. But take note of the dramatic decrease in five year revenues between 2008 and 2012--nearly €60m. 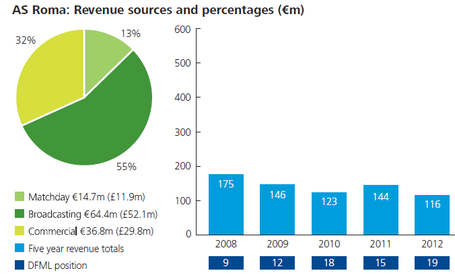 I'll let the folks at DeLoitte sum up the precipice upon which Roma currently find themselves:

Whilst AS Roma's long-term future prospects look brighter with plans announced for a new stadium development, in the short-term an on-pitch improvement in the form of Champions League qualification is imperative in order to increase overall revenues and maintain their status as one of only eleven ever present clubs in our Money League.

It's easy to paint the Sensi-Era, particularly the Rosella regime, as a financial failure, but they didn't exactly leave the cupboards bare for Pallotta. As that quote alludes to, Roma has consistently been among the dozen most lucrative franchises in global football over the past decade. Given the meteoric rise of the Premiership and La Liga, as well as the recent ascendency of the Bundesliga, Pallotta's challenge is really two fold.

To reach his stated aims of global empire, Pallotta not only has to overcome Roma's own financial hurdles, but those of Serie A as well. Given the club's downward financial trends (based on the available data) and the proportional poverty of Italy's clubs compared to Europe's remaining major leagues, this is no small task, both in terms of scope and significance. Bringing us to our next point...

We're in year three of RomAmerica, and the Project is on its fourth manager and facing its second season sans Europe, which, as we've seen, has dire financial outcomes. While the club's commercial revenue increased 6% from 2010-2011 to 2011-2012,  the most ambitious arrow in their financial quiver, the new stadium, is at least three years away and  currently exists only in the imagination of the eager and easily impressed.

While many have criticize Pallotta for being too myopic, forcing an American peg into a European hole (here, allow me), when you look at the dramatic spike in revenues for Europe's major leagues, they've come with a distinctly American twist. The United States may be remembered for many things, but surely their ability to wring a profit out of nearly anyone and anything will remain near the top of that list. So while the acquisition of modern amenities, exploitation of international broadcast rights, and merchandising the living daylights out of one's brand aren't on the same level of ingenuity as nuclear fission, they are certainly aspects with which American businessmen are intimately familiar. So while many will question the tact with which he's approached this Roman reformation, there is a method to his American madness--an empirically proven one at that.

Ironically, it's this cross section of American business sense with Italian-American blood that got many of us so excited by this new project. Here you had a small cadre of men who cut their teeth in the American corporate labyrinth, translated that into success in the sporting arena, and, being Italians, presumably had an innate understanding and appreciation for calcio...presumably being the operative word there.

Of course, with ups there are downs. One could've assumed, or hoped desperately, that because our new benefactors collective surnames ended in vowels, they would "get it"-they would know why Italians presumed theirs was the only way, tried and tested to last whatever whims the global football machine was currently implementing, to know that, no matter what you spend or what you profess, that eventually all roads lead to Rome. That there was something eternal about this team, something unspoken, something incalculable and something inexhaustible. That they could somehow couple Roma's provincial pride with American business savvy to create something that was at once global and local, something that spanned generations and cultures, while remaining true to its ancient roots.

But the prospect we're faced with now is that these two phenomena might be mutually exclusive. Can you rule the footballing world while maintaining an almost tribal sense of identity? Can you embody the spirit of one of the world's oldest cities while attempting to reach and assimilate its newest markets?

In a sense this paradigm is inherently and historically Roman. Exerting enormous amounts of energy and capital, over extending yourself, both in thought and presence, singularly focused on spreading the Roman way of life to the masses teeming to be proselytized, all while the very society you tout is in the throes of change; a change that, given your external focus, is nearly impossible to internalize.

So while Pallotta won't have to contend with Visigoths or Gauls, he has to traverse the same divide as Augustus, Marcus Aurelius or Hadrian did...but, hey, at least they had their own colosseum*

*Yes, I'm aware it was built long after the rein of Augustus. But he is nothing, if not the Francesco Totti of the Julio-Claudian dynasty.