Week one was a resounding success, as the clubs trio of Roman's steered the squad to a 2-0 victory over Livorno. But how did Roma's newest defenders, Maicon and Mehdi Benatia, perform?

Regardless of how the remainder of this season unfolds, Sunday evening will be remembered as a distinctly Roman affair, with the cities three favorite sons factoring into both of Roma's goals. What started with a vintage Daniele De Rossi screamer, assisted by none other than Francesco Totti, was slammed home by the newest local hero, Alessandro Florenzi, as he slotted the matches final goal past Francesco Bardi in the 67th minute.

Three Romans, Three points. Doesn't get much better than that, but what about Roma's two defensive debutants, how did they prove themselves in their first test in the new crest?

First up, the boy from Brazil.

We've all had our fun slagging off Maicon, sure he's not exactly svelte, but what we saw against Livorno was a man possessed, and one who surely has next summer on his mind, which, if the next 37 weeks follow suit, is a good thing.

He's mostly known for his offense, so let's start there.

Maicon's motor was revving high in the first 45 minutes, in case his saturated shirt wasn't enough of an indication--seriously, what's up with those things? Anyway, back to the numbers. Maicon was aggressive in the first half, as his position on the pitch indicated. Maicon spent 42% of his first half minutes in the Livorno half, 17% of that in the final third. Given how freely he bombed up and down the sideline, it should come as no surprise that he was a perfect three-for-three in take-ons in the first half.

He looked good, he looked agile and he looked motivated. He was nearly everything one hopes for from their right back; passing, moving, taking initiative, and generally easing the pressure off the midfield. When Maicon had Maicon in mind, it went well. Really well. However, his playmaking and passing weren't exactly crisp, particularly in the first half where he only hit upon 74% of his passes, though he did improve upon that markedly in the second 45, bumping that up to 87%.

Crossing...well, that's another matter. A matter made worse when you factor in Federico Balzaretti's continued struggles with the cross. Roma's fullbacks went a combined 2-for-13 in crossing. I'll do the math on that one for you, that's 15%.  You think that's bad? Well consider this, those were the only two crosses completed in the entire match, Roma was a pitiful 2/25 on crosses this evening.

Poor crossing and imprecision in the final third, it's the Roman way.

So how about our new Moroccan?

While Mehdi Benatia's offensive contributions were effectively nil, he was stellar defensively (statistically speaking), virtually removing Paulinho from the match. Paulinho, Livorno's leading goal scorer and assister (that's a word, right?) last season is the undoubted talisman of this Livorno side, so this was no small feat. Have a look at the graphic below: 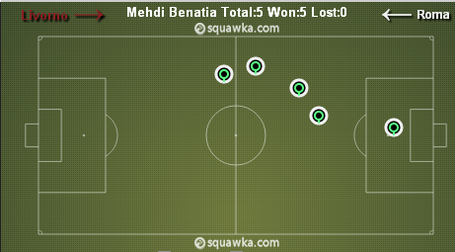 This particular graphic shows the headed duels between Benatia and Paulinho. Now, being several inches taller than Paulinho, what you see there is what you would expect, Benatia won all five of his headed duels vs Paulinho. But what this is indicative of, particularly when you look at their combined heat map, the passes Benatia intercepted either coming from or intended for Paulinho, and even his attempted tackles against Livorno's leading scorer, was this: Benatia was on Paulinho like white on rice, in some instances picking him up 18-30 yards away from Livorno's goal. Benatia pressed, harried and harassed Paulinho all night long, practically removing him from Livorno's plan of attack. If he can do this against Carlos Tevez, Mario Balotelli, or Mario Gomez, we're golden--his size will be particularly beneficial against the latter two. But tonight was a great sign of things to come, that's for sure.

What Does Mehdi Benatia Bring to Roma? 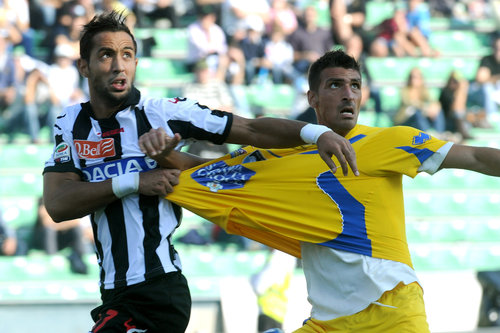 While we caught a glimpse of it tonite, Benatia's Serie A career showed he's no slouch. So what exactly should we expect?

On the whole, Benatia had two tackles, two interceptions and five clearances; two of which were in the final third. So, for his first match donning Roma Cares, he was just as advertised: nearly impossible to beat in the air, a tough tackler, great man marker and tactically aware. What he threw into the mix tonight was an impressive range of movement, venturing far up the pitch to disrupt Livorno's attack and swallowing up any attacking momentum Paulinho could muster.

So on a night best reserved for true Romans, the club's newest defensive reinforcements availed themselves quite well. While the story of the backline is far from written, and there will surely be nights where we'll clamor for Marquinhos, if Benatia and Leandro Castan can get their chemistry and communication straight, and if Balzaretti and Maicon can present a consistent offensive threat, Roma's defense could prove to be quite solid and remarkably well rounded.