How Can Roma Stop Miroslav Klose?

He may be 35 years old, but Miroslav Klose is as efficient as ever. In only five matches against Roma, Klose has scored three goals, so what hope does Roma have at stopping him this time around?

Share All sharing options for: How Can Roma Stop Miroslav Klose?

Call it a flash of inspiration, or a shrewd moment of prescience, but in last week's preview I came up with the brilliant idea of including key-matchups for the Parma match. I'm also currently working on a hand held device that enables the user to read books and access the internet simultaneously. I don't know, we'll see, the world might not be ready.

But in a nod to a good idea ignored (why I didn't include them sooner is beyond me), let's flesh this one out a bit, simply because this matchup and this player, even at age 35, is so dangerous and so prolific, he deserves more than a few paragraphs attention.

Miroslav Klose is not exceedingly tall, nor is he blindingly fast, and he certainly won't wow you with his dribbling, but he is exceptionally efficient when it comes to scoring goals. While this won't necessarily win the hearts and minds of the youth, it does tend to win its fair share of matches.

I try not to make presumptions about anything in life, whether we're talking about the weather, the look that kiosk girl gave me at the mall when I was 17, or even a seemingly well-cooked piece of chicken, but since you're reading this, I can assume you understand the nature of the game we love so dearly; genuine scoring chances aren't exactly low hanging fruit, so you better harvest them when you can.

With 15 goals on 48 shots last season, Klose's 31% conversion rate was tops in Serie A among the league's top 10 goal scorers, and, if we exclude Giampaolo Pazzini's 28%, Klose was miles ahead of the competition. Ahead of Cavani, ahead of Di Natale and nearly double Stephan El Shaarawy.

Think about that again. Klose made 29 appearances, taking only 48 shots and scoring 15 goals. His 1.7 shots per match didn't even crack the Top 50 in Italy, yet he scored on nearly one third of them. Remarkable.

And though he's only been in Italy a short time, Klose has terrorized Roma. In just five appearances, Klose has managed three goals and one assist.

So how does he score and how can Roma stop him?

Before we venture a guess as to how Garcia will stop the man with 14 World Cup goals, we need to know how and where he scores.

As true a proper striker as you'll find in the game today, the bulk of Klose's goals come in the heart of the 18, front and center. No shocker there, as that's the case with any true to sort-of-true number nine.

But when you consider what a low usage/high efficiency shooter Klose is, his numbers become even more remarkable. To illustrate this, let's use Pablo Osvaldo as the standard bearer for inefficiency:

To be fair to PDO, he converted on nearly 18% of his goals, not far behind Edinson Cavani last year, scorer of 29 goals, but still light years away from Klose. In this light, Klose's true genius and his biggest threat to any and all comers is exposed... EEE-FISH-EN-SEE.

Despite leading Lazio in goals last season, Klose was but third in total shots. The fact that he can be counted on to score in nearly one of every three shots gives the Lazio offense an incredible amount of leeway. Proportionally speaking, Klose is not a high usage player, which simply means, he's not that involved in Lazio's offense--at least not in a way commensurate with his talent--yet the returns on this usage are extremely high.

While this is really a basketball term, put simply once more, it means this: Klose's impact on the offense isn't dependent upon being the focal point, you don't have to use him a lot in order to reap the benefits of his talent. He's almost an added luxury in that sense; not demanding of the ball, yet clinically efficient when it comes his way.

How, then, can Roma, or anyone for that matter, hope to stop Klose?

Given what we just discussed, his extreme efficiency and relatively low usage rate, this question carries added significance.

In order to venture a guess at how Garcia plans to stop Miroslav, let's look at a few of his flubs from last season, to see if any pearls of wisdom stand out.

I always throw a word of caution when highlighting these examples, but it rings especially true in this instance. Given his dearth of shots, Klose's imprint on any given match can be damn near indiscernible, but he's so deadly efficient that when he deems it necessary to intervene, the results are profound.

Given this confluence of factors, plotting a pervasive pattern is tough; there is no standard Miroslav Klose match. So the graphics here are extreme examples of how selective opponents held him in check. 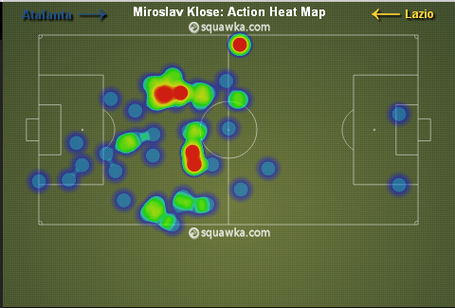 Atalanta is not a defensive juggernaut by any stretch of imagination, but one look at this heat map and you can see what their m.o. was for Klose; get him away from the goal. Considering that Klose only spent 6% of his time in the penalty area is testament to the success of this tactical ploy. And while you can only contain Klose to a certain extent, Atalanta denied him the ball quite effectively on this night, for the most part keeping his touches 30 yards away from goal, where he is essentially useless.

Despite the tightening of those reins, Atalanta still lost the match on a Hernanes goal in the 17th minute, and should consider themselves lucky Klose didn't catch them off guard. While they successfully pushed Klose up the pitch, they did allow him to drift left, where he can cut in on his deadly right foot, with which he scored 11 of his 15 goals last season.

So what about Roma, did they manage to keep Klose on clampdown? 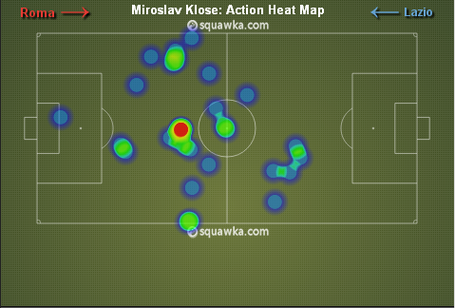 First things first, Klose only played 59 minutes in this Roma victory, but looking at this particular heat map, one thing sticks out: Klose could not get comfortable anywhere on the pitch in this derby. With Marquinho and Torosidis denying him the flanks and Leandro Castan and Marquinhos cutting off the center channels, Klose couldn't find safe harbor anywhere in the Roman half...maybe that Andreazzoli guy was onto something afterall?

As I mentioned, these were just two quick, selective examples. However, they do show that it is possible to keep Klose in check, to an extent. He's just so efficient and requires so few touches,  that he, more than any other player in Serie A, can change a game in an instant, while spending the rest of the match seemingly listless and on the periphery of his team's attack.

Oh, and Lazio paid nothing to get him.

What it takes to stop a player like Klose is really no different than dealing with a husky youth; just keep him out of the kitchen.

Given Benatia's injuries last season, Roma's biggest and best bulwark only squared off with Klose once while playing for Udinese, but tracking Klose was job one, and a job well done it was. Benatia successfully kept Klose pinned to the center of the park in the neutral zone, some 30 yards away from the Udinese goal, and effectively kept him off the left flank, thereby denying him the chance to cut in on his right foot.

And that's really the key. As we've seen, Klose is incredibly, exceedingly, and extraordinarily efficient, but he's also extremely reliant on his right foot (remember, 11 of 15 goals came off the right foot, many of which came from the left side of the goal mouth). So while it's not really a key, per se, the only chance Roma has at directly mitigating Klose's effectiveness is to deny him the left side of the pitch. Indirectly speaking, by keeping him away from the goal, they keep him off the end of any long balls and effectively render his surprisingly solid dribbling skills moot.

While these are not Earth shattering revelations, Klose's low usage and high efficiency tend to make the mundane details paramount. Keeping Klose in check will require the combined efforts of Benatia, Leandro Castan and Daniele De Rossi to keep him away from the goal, with everyone from Kevin Strootman to Maicon closing off the channels through which Klose gets the ball on his right foot in scoring range.

But, if we're framing this analysis like a prize fight, Mehdi Benatia and Miroslav Klose will go toe-to-toe in the square circle (that's a boxing reference to you ill-informed MMA kids).

While the Derby della Capitale never lacks in intensity or intrigue, this tale of three points may be decided by two men.

**Yes, that title was a nod to this. Long Live, The Clash!