If familiarity breeds contempt, what can you say about two sides about to meet for the 173rd time? The Derby della Capitale, always a contentious affair, takes on a new edge, as Roma look to avenge their loss to Lazio in last May's Coppa Italia finale and start off the season with four victories.

A new manager, new uniforms, a new contract extension for Francesco Totti and three wins on the trot, what better time for a derby?

This will either be a triumph or a complete disaster. There is no middle ground. Roma will soar to four in a row, or Rudi will seek shelter in his mock necks amid calls for his head.

While Roma is currently the top team in Serie A --well, tied, but whatever--they've cruised to nine out of nine points thanks in part to a soft schedule, breezing past Livorno, Hellas Verona and Parma through the season first three weeks. 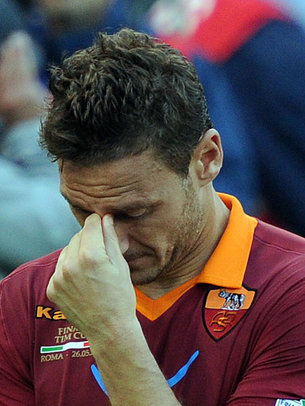 Not only will Rudi Garcia face his first real test as Roma's headman, he'll do it in the tensest of circumstances.

Roma may be the hottest team on the peninsula at the moment, but that matters little when facing Lazio.

Though it may sound trite, when the coalitions of Rome face off, you throw out the records. For our side, that's a good thing, as you have to venture all the way back to March of 2011 to taste a Roma victory. More to the point, the Giallorossi have only one victory in the past six derbies

We, uh, won't discuss the last meeting, which led to this:

So how exactly will Roma vanquish Totti's tears?

Let's have a look.

Well, maybe not loaded, loaded but they're pretty good. Yesterday we discussed what makes Miroslav Klose so good; his damn near incomprehensible blend of efficiency and low use.

So if Klose isn't taking all those shots, who is? Who is the fulcrum upon which Lazio's offense pivots?

Well, I'm glad you asked because that leads us to our first key matchup of this, the 173rd Derby della Capitale.

Antonio Candreva vs Everyone

Why verses everyone? Quite simple, really, Antonio Candreva is Lazio's Mr. Everything. Candreva leads Lazio in the following categories: passes attempted, key passes, crosses, long balls, successful dribbles, fouls drawn, and goals. Not only is he one of Lazio's best players, if you can bear the thought, he's quickly cementing himself as one of Italy's finest offensive players, certainly among its most underrated at this point.

Given his blend of creating and attacking talent (six goals, five assists last season), you can consider him Lazio's Totti, Andrea Pirlo and Antonio Cassano rolled into one.

Through the season's first three matches, Candreva has featured as both the right wing and the second striker in Lazio's 4-4-1-1, though the ostensible difference in those roles is rather ambiguous, as Candreva led the club in shots and passes in each role, against both Juventus and Udinese. In terms of the schematics of Lazio's starting XI, Candreva's role is quite fluid, so where he figures into some tactical diagram matters little.

The point being, he's really coming into his own and he has virtual free rein in the Lazio offense, which, again, is attributable to the inimitable Miroslav Klose.

So, the only real difference as far as Sunday is concerned is, does Lazio shift him to the right to expose Dodo (Please, God, No!) or keep him in support of Klose? If it's the latter, Roma can cope quite well, as Candreva would have to first work his way past Kevin Strootman and Daniele De Rossi before tangling with Mehdi Benatia and Leandro Castan in order to link up with Klose. In case you hadn't noticed, with the addition of the Dutch Jesuus and The Moroccan Something or Other, Roma's got some beef in the middle of the park.

If there is one wrinkle in Candreva's game that Roma can exploit, however, it's his long passing. By pinning him to the flank and effectively cutting the tether between him and Klose, Roma can hopefully take some of the edge off his passing game and put more of the actual onus on Klose to create his own chances...this is a big if and wholly dependent upon Dodo's defensive capabilities, assuming Federico Balzaretti is absent.

In any event, if the first three matches are any indication, this may be a break out year for Candreva.

Now, take everything we just discussed about Candreva and apply it to Hernanes, Lazio's Biggest Kahuna. He maintains the same sort of creating and attacking balance as Candreva, but kicks it up a notch in terms of goal scoring, banging home 11 league goals last year. Through three appearances this season (Serie A and Europa), Hernanes has two goals, seven key passes and one assist. He is, quite simply, their most talented player.

The best teams often have at least two of these sorts of hybrid players; you have to, there's no way around it, the game is too dynamic these days to have one dimensional players. The Roma defense got a good taste of this phenomenon last week with Antonio Cassano, now they get both barrels, Candreva and Hernanes.

Hey speaking of multifaceted players, let's shift the focus of these matchups and talk about who Lazio must stop.

Focusing on Totti or Pjanic is a bit too easy, they're the pillars upon which Roma's offense stands; they do what they want, when they want, and where they want, and, thus far, they've done it quite well. To say it will take a concerted, systematic effort from Lazio to quell those two would be an understatement, so let's focus, instead, on two young and intriguing players; two players who may or may not start even in this match, and who may or may not go face-to-face.

The chances of this matchup coming to fruition is dependent upon a variety of factors: Rudi's eternal flame for Gervinho, Ljajic's own poor performance against Parma and Cavanda's fitness following 90 minutes in Thursday's Europa League clash.

But if it does, it's a battle of push and pull. Though he hasn't gone the full 90 for his new club yet, Ljajic's performances have varied greatly, and, although it's a bit early to draw any definitive conclusions, the space he occupied and the type of passing and movements he executes dictate, to a certain extent, his overall effectiveness.

Take his contrasting performances against Verona and Parma. As a 52nd minute substitute in the Verona match, Ljajic was slotted to the right of Francesco Totti and did quite well for his debut, scoring one goal and completing 89% of his passes. Part of this success was attributable to the seemingly instantaneous connection he established with Totti. Never straying far from Er Pupone, Ljajic was able to work the one-two game with Totti to great effect, using Totti's touch and anticipation to spring him into the slightest of spaces. By moving in concert with one another, Verona wasn't able to isolate either man, nor were they able to close out the passing lanes. Pass and move, it's a simple game sometimes.

Granted, this was only roughly 40 minutes of action, but it's precisely this interchange that should bring a smile to your face.

You don't play a derby, you win it.   -Rudi Garcia

Now, looking at the Parma match we can see some slight differences in how his positioning impacted his performance. I say slight because, much like the Verona match, he only played 50 minutes or so, making any conclusions drawn suspect. Nevertheless, by pushing Ljajic out extremely wide, Parma increased the distance between him and Totti, removing the threat of the two man game, forcing Ljajic to pass over greater distances, and keeping him away from the goal; he spent nearly a third less time in the 18 yard box than the previous week. We may not yet know what Ljajic is, but get him near the goal and he's dangerous.

So if you're Lazio, in addition to closing off the center attacking channels, you have to hope that the early glimpses of Cavanda are legit; the 23-year old Belgian had seven tackles in Thursday's Europa League match alone, and is currently tied for second on the squad in tackles and interceptions, showing great anticipation and tenacity. Oh, and he's got nearly five inches and twenty pounds on Ljajic. He's not a household name yet, but Cavanda has all the physical attributes to be a pretty stout player, and given his size and muscle, it would appear he's well equipped to deny Ljajic the ball, both in the air and in tight spaces.

So keep an eye on this one, if Ljajic is denied the center of the park, does he have the skill, speed and creativity to get past Cavanda on his own? Will Garcia shift play to the right or will Ljajic drop deeper himself?

Stats are great, they bring a matter of objectivity into an otherwise irrational mess. Somewhat ironically, the most telling stat of this derby speaks not to pragmatism and planning, but is rather indicative of why this derby is nearly unparalleled in global football.

As in, over the past six derbies, these two sides have accounted for 44 yellow cards. Not impressed? How bout we throw in nine red cards...nine!

What does that mean, you ask?

Simple, when it's Roma vs Lazio, the stakes don't matter. So, whether it's your first derby or your 173rd, drape yourself in red, forget your future plans and leave your inhibitions, your stresses, and even your sense of decency at home.