Roma's latest guest to the Olimpico is not a well mannered one. Bologna, though still winless on the season, have not lost on Roma's home ground since 2009. But in Rudi's Roma, you don't drop points, especially not at home.

Share All sharing options for: Roma vs Bologna Preview

Roma has always been an interesting club, featuring a mesmerizing mixture of big city intrigue and provincial charm. A club with enough influence and power to hang with the heavyweights, yet far enough removed from the lap of luxury that fans see within the club their own travails and self-doubts.

The mixture currently intoxicating Romans the world over is an amalgam of shock, euphoria and cautiously guarded optimism. I mean, for the love of god, Roma has won five in a row! Which, if you don't remember what that looks, allow me:

While I can attest that one of us actually predicted this many weeks ago (not me), seriously, nobody really expected this, right?

And, yes, you can point to the soft schedule as being complicit in Roma's shocking start to the season, but when you dig a bit deeper into that, a lovely bit of irony rears its head. The newly promoted sides withstanding, Roma's remaining victories (Parma, Lazio and Sampdoria) came over teams against whom they've struggled in recent years. So, if nothing else, Roma has exercised some demons.

With the Bologna Football Club coming to town, the story is much the same; a seemingly inferior opponent against whom Roma has struggled in recent times standing in the way of what should be a cool three.

In this particular and peculiar matchup, Roma hasn't tasted victory since 2011....11, as in the number of goals these two sides scored over 180 minutes last year. But with Zdenek Zeman forced to find employment elsewhere, and the absence of Alberto Gilardino, scorer of three of those eleven goals, this matchup may be lacking in bombast, but certainly not in importance.

Roma's recent record against Bologna isn't stellar, as we just discussed, but when the Rossoblu come to Roma, matters get worse. You have to travel all the way back to 2009, before #hashtags#were#everywhere, and before you knew what twerking meant, to find an evening when Roma bested Bologna at the Olimpico (Thank you, Mirko. Thank you, Simone)

But what about this Bologna, what threat do they present to Rudi Garcia's crew?

Well, based purely on five weeks of data, not a whole lot. Bologna, still winless, has been a team of extremes in this young season, generally being among the league's worst offensive teams, while fairing quite well in the black and white (read: clearly definable) defensive categories.

They do lead the league in cards, however...so, be careful out there, fellas.

When dealing with Bologna, there's really only one man worth discussing; Italy's very own Yahoo Serious, the collector of strange, seemingly disjointed tattoos, one Mr. Alessandro Diamanti.

Being a midfielder, Strootman has his offensive duties, of course, but on this evening he'll have his hands full with Diamanti and the rest of the Bologna offense, for no other reason than they tend to attack the left side of the pitch with extreme prejudice.

Diamanti is, for all intents and purposes, Bologna's Francesco Totti, insomuch as the Bologna attack hinges almost entirely upon his vision and creativity. Last season, Diamanti pulled off his own impressive balancing act, scoring and assisting seven times each, while tying for fourth in key passes and dribbles per match in Serie A.

So, in that respect, he's a concern for nearly everyone wearing the inexplicably and exceedingly moist red polo tops on Sunday. Diamanti, much like Totti, is capable of doing what he does virtually anywhere on the pitch. However, when you look at the nature of the Bologna attack this season, one thing stands out; their trajectory is extremely left leaning, fomenting nearly 40% of their forays from this side of the pitch. All of which is to say, the immediate onus on stopping Diamanti is squarely on the broad shoulders of Strootman. 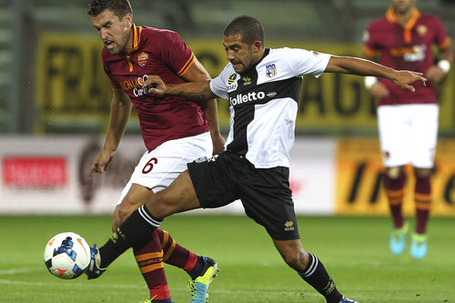 So where did Diamanti figure within that pattern last year? Well, right in the thick of it, to be somewhat exact. Diamanti was among the league's best at creating scoring chances last season, nearly 25% of which occurred in the forward reaches of the left flank. Take Diamanti's own preference for going left and combine that with Bologna's extreme left wing tendencies as a whole, and the benefits of keeping Diamanti away from that corner become clear.

And while he may not be off to as quick a start this season, Diamanti is still creating chances at a 2.4 per match clip, with 22% of those occurring in, you guessed it, the far left hand corner of the final third.

The job for Strootman is simple, derail Diamanti as quickly as possible. With Maicon out, chances are De Rossi will spend a fair amount of time in defensive cover, leaving the potential for a porous midfield through which Diamanti might slither. While Strootman has been incredibly impressive thus far, there is one area in which he has not excelled; tackling. Not in the gross sense, he has 15 through four matches, but in his efficiency. At 53%, Strootman's tackling success lags far behind his midfield competitors, in some instances by as much as 30%. With Diamanti's pace and dribbling ability, this could be an issue.

Throw in Strooman's proclivity for fouling (11th most) with Diamanti's ability to get fouled (2nd most), and Roma could be in trouble. When you factor in Diamanti's set piece prowess, the trouble grows greater still.

Diamanti is a hell of a player, one who often gets lost in the discussion of Serie A's most dynamic talents, perhaps because he plays in Bologna, perhaps because he's so seemingly irreverent, or perhaps because no one quite knows what to make of him. There is no equivocation, however, when it comes to this; Diamanti will be Strootman's toughest individual test thus far. His movement, creativity and love of contact will test Strootman's agility, precision and patience.

Beats me, but he scored twice last week versus Milan, and guess which side of the pitch they came from? And guess who is Roma's last line of defense against Diamanti, Lexalt et. al? That's right, Dodo, whose defensive abilities aren't, like his aviary namesake, extinct, they simply never existed.

Laxalt, a 20 year old Uruguayan midfielder on loan from Inter (ugh), had a bit of a coming out party last week against Milan, pushing Bologna to an early 2-1 lead, which they eventually squandered, unfortunately. While the book on Laxalt is practically non-existent, his link up play with Diamanti and ability to get in the box should test the limits of Dodo's defensive capabilities, as well as keeping Mehdi Benatia's head on a swivel.

As we mentioned, you can bet your bottom Euro that DDR will be involved in making life uncomfortable for both Diamanti and Laxalt, but keep an eye on Miralem Pjanic. As we alluded to early this week, Roma's Bosnian prodigy has availed himself quite well in the defensive aspects of the game, falling behind only Strootman and Federico Balzaretti in tackles, and ranking fourth in interceptions. Miralem is becoming more complete and more dynamic week-by-week. *cough* contract extension *cough*

But, as far as Dodo is concerned, he needs to apply the same strengths that make him such an intriguing offensive prospect, speed, agility, speed and speed, and dip them in a candy coated defensive shell. With his athleticism, Dodo should be able to keep up with nearly any midfielder on the planet, but knowing where to be, how his movements impact the rest of the defense and getting his nose dirty are different stories altogether, however.

Say it a million times, and you still haven't said it enough. These are the type of matches you must win...blah, blah, blah.

Look, Roma won't go 38-0. I know it, you know it, and you can be damned sure Rudi knows it. At some point in time the wheels will temporarily fall off, and given their strong record at the Olimpico, their strength at attacking down the left, and Roma's sudden weakness at defending that flank, the time might be ripe for a reality check.

Soft schedule or not, Garcia has the Giallorossi firing on all cylinders. Totti is creating like never before, De Rossi is a man reborn, and Pjanic is starting to tap his limitless potential, while new signings Benatia and Strootman have made a seamless transition to life in Rome. The team is passing, moving, defending and scoring seemingly at will. Except, you know, in the first half. Gotta do something about that, Rudi.

Despite the ever present pangs of pessimism, Rudi's Roma has really shown no wrinkles. Beyond being part and parcel of the Roma experience, the only reason we're collectively waiting for the other shoe to drop is purely because Garcia has surpassed all reasonable expectations.

Rudi has transformed Roma's reality. What was once a sixth place club is now suddenly thrust into the limelight, complete with new pressures and new expectations. However, adversity, as we're all aware, can eviscerate expectations, reasonable or not, and reshape reality in an instant.

Garcia's first clash with calamity, brought to life by Maicon's suddenly tenuous thigh muscles, is a daunting one, for Bologna exceeds where Roma falters, on the left. While it may be foolish to pin the outcome of an entire game on one matchup or one section of the pitch, this is the first situation in which Garcia's Roma looks vulnerable, and Bologna has talent and direction enough to exploit that weakness.

With a tough away fixture against an increasingly formidable Inter side next week, Roma needs to get an easy three while they still can.

After all, now that Rudi has reshaped our reality, it's expected.