Alessio Romagnoli The Fullback: An Analysis

Alessio Romagnoli is only 19-years-old. He is not now, nor will he ever be, a fullback. But guess what? He hasn't done that bad. Join us in a brief analysis of Alessio Romagnoli: Roma's Newest Fullback.

Share All sharing options for: Alessio Romagnoli The Fullback: An Analysis

When it comes to primavera products, no fan base is as unrealistic with their expectations and as unrestrained with their love as Roma fans. Whether it's the eternal bond between the club, the city and the fans, or simply because Roma aren't the most profligate spenders, the fortune of these foundlings has an inordinate impact on the future of the club. This equation is magnified if the adolescent in question was born within earshot of the Olimpico.

We've said it many, many times in these spaces, but when an actual Roman suits up for this club, the consequences and rewards are amplified. Every touch and every flick from the feet of Francesco Totti and every hard charging tackle and screamer from the boots of Daniele De Rossi strikes something emotional, something eternal and something unspeakable within the hearts and minds of Romans everywhere.

You don't know why it matters; you just know that it does...a lot.

Of course, for every Totti and De Rossi, there are the Aquilani's and Cerci's; the ones who, for a variety of reasons, could not conflate the hopes of the Romans in the stands with the Romans on the pitch.

While Alessandro Florenzi appears to have the temerity, the passion and the endurance to endure life in this madhouse, today we turn our attention to the latest local boy come legend, Alessio Romagnoli. While he may not hail from the city proper, Romagnoli was born in the portside town of Anzio, some 85km from the Stadio Olimpico, and has spent his entire youth career in the Roma system, first earning a call up by Zdenek Zeman at only 17-years-old.

But this isn't a biography on Romagnoli, this is merely a look at a 19-year-old kid pressed into service in an unnatural position. Alessio, as we all know, is a centerback by trade--to the extent a 19-year-old can have a trade--but, due to injuries and suspensions, has been forced to play left back since coming on as a 55th minute sub against Sampdoria.

So, with only 299 minutes under his belt as a makeshift left back, let's take a look at the extremely early returns of Romagnoli the full back. As those approximate 300 minutes came across four matches, let's do a mini-dissection of each one.

Coming in for Maicon, Romagnoli--who was making only his third professional appearance--was thrust into the limelight as a leftback, so we'll focus on the manner in which he fit into the offensive flow. Besides, Roma had just gone up 2-0 when Maicon went down, so there wasn't a ton of critical defending required from anyone. 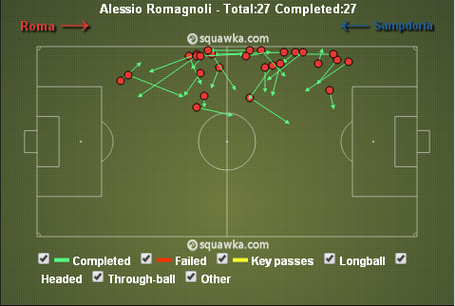 This graphic wasn't doctored, nothing was omitted; Romagnoli really was a perfect 27-for-27 passing in his first appearance of the season. Romagnoli passed forward, backwards and inwards from the flank, connecting with Kevin Strootman, Radja Nainggolan and Gervinho to press an already bewildered Sampdoria defense.

There isn't much we can glean from 35 minutes on the pitch, but understand this; Romagnoli is 19, he wasn't expected to play in this match--in fact, he hadn't played at all since March of 2013--certainly not as an emergency leftback. So, give the kid credit for composure if nothing else.

Romagnoli did all that was asked of him, and he did it well; he was active, he was integral and he was accurate.

Roma held sway in this match from minute one to minute ninety, so they didn't really need Romagnoli to do much other than exist; don't make any mistakes, don't take any stupid chances. Looking at his performance, Romagnoli did just that, completing 90% of his passes, creating one scoring chance, intercepting two passes and making three clearances. Solid but not spectacular. 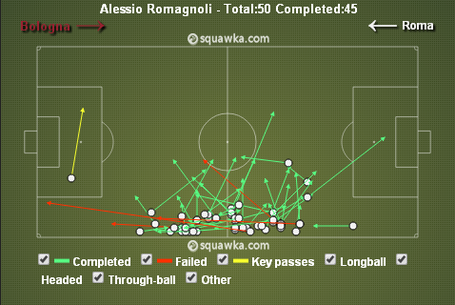 We'll throw this one up if only to show Romagnoli flexing his fullback muscle. Compared to our previous example, Romagnoli appeared to make a more concerted effort to exploit open channels (both long and short), working the two-man game with Miralem Pjanic and even, in Totti-esque fashion, switching playing to maintain possession and keep an attack alive.

While the numbers don't overwhelm you, the space he occupied on the pitch and the nature of his passes suggests he was a bit more comfortable in the offensive role forced upon him, showing little hesitation jumping into the flow of the attack; passing and moving, holding and switching; doing whatever it takes to maintain momentum.

We've certainly seen worse performances from fullbacks down the years, right? But this was a positive step forward for Romagnoli; he wasn't hesitant, he wasn't foolish and he wasn't overwhelmed

This match, against one of the club's most hated foes, was undoubtedly Romagnoli's finest night as a professional footballer. Romagnoli made a match high 89 touches, completed 88% of his passes, 100% of his long balls,  made three tackles and nine clearances. He was more than up to the task on both sides of the ball against a tough opponent. 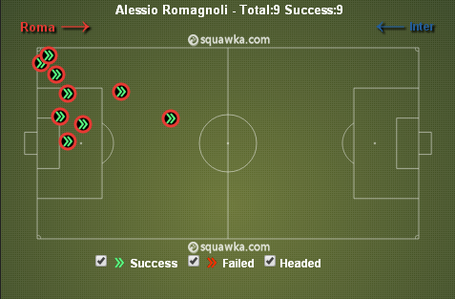 While this graphic isn't as sexy as the others (come on, you know you loved the Jackson Pollock-esque smattering of green arrows), it does show that Romagnoli has the awareness and agility to snuff out an attack pretty much anywhere on the pitch. Notice the cluster of clearances in the far corner, an area in which a temporarily converted centerback is most likely to feel awkward, but Alessio did a phenomenal job stopping Fredy Guarin, Rodrigo Palacio and nearly ever Inter attacker who dared stray down his flank, effectively removing that option from Walter Mazzarri's bag of tricks. He beat Inter's attackers to the ball, he closed ground and he won the aerial game; defensively speaking, you can't ask for much more from a fullback.

Again, we're talking about a teenager playing out of position in only his fifth professional appearance. We cannot understate that.

This, as you might recall, was not a good evening for anyone in the red kits. Roma, by most accords, should have won this match; they out moved, out possessed and simply outworked Napoli last week. However, thanks to a moment of youthful indiscretion from Romagoli, Roma surrendered three points at the San Paolo. Greater crimes have been committed in Roman history for sure, but this wasn't his finest moment, 19-years-old or not. 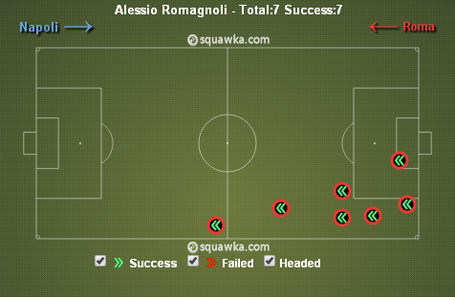 However, despite losing track of Jose Callejon on the game's lone goal, Romagnoli was far from derelict in his defensive duties. Roma's #46 made two tackles, two interceptions, five clearances, one blocked shot and one offside won. One look at the graphic and it's clear as day; Romagnoli was pressing further up the pitch than in prior matches, exerting the bulk of his energy on either side of the midfield. In addition to his seven clearances, Romagnoli won 75% of his headed duels, three of which, ironically, game against Callejon.

Although Roma's passing was more precise and they held the lion's share of possession, they weren't exactly bombarding the Napoli defense with an array of shots, so Romagnoli wasn't fully ingrained into the Roman attack, to the extent it even existed this night. He simply had the misfortune of making Roma's biggest mistake on this evening, one which ultimately cost them the match.

If the past four weeks have shown us anything, it's that Romagnoli possesses exceptional athleticism for a centerback; he was rarely (outside of the Callejon goal) caught out of position, seldom outrun and rarely out jumped. He has the size and speed to cover ground laterally, the tactical awareness to press up the pitch and not look like a fool, while the simple fact that he's survived and looked like a passable fullback is a testament in itself.

At 19-years-old and already standing 6'2" and nearly 170lbs, Romagnoli has the makings of a prototypical centerback. He has the size, the speed and, given time, should have the strength to hold off a variety of attacking threats. Furthermore, the eagerness with which he's approached his role as a leftback should go a long way to endearing his name to a fanbase that, though they give their love unabashedly, hold duty and fealty to the crest above simple statistics.

The extremely early returns on Alessio Romagnoli are quite promising, indeed.