Francesco Totti to Start Against Udinese

Roma begin their weekend preparation for Udinese with some fantastic news, the return of Francesco Totti. For a club with a suddenly floundering offense, the news doesn't get much better than this.

Share All sharing options for: Francesco Totti to Start Against Udinese

Although the Saint Patrick's Day showdown against Udinese is still three days away, the latest training ground update brings with it some spectacular news, the return of Francesco Totti. Not only to the squad list, but to the starting lineup. Given their less than spectacular run in his absence, not to mention the sudden loss of Kevin Strootman, this is best news Roma could have possibly received.

After nearly a month on the sidelines following an extremely strained gluteal muscle, Francesco Totti appears ready to return to action against Udinese on Monday evening. Not only will Totti make the squad list, the early reports indicate he will be immediately thrust back into the starting XI, fit and ready to make his 26th league appearance against Udinese. There are also indications that, despite the return of Totti, Rudi Garcia might still tinker with his lineup, possibly placing Totti in the hole of a 4-3-1-2 behind Mattia Destro and Gervinho.

No matter where he plays or what role he assumes, we all know that life without Totti is often bleak. No Totti, No Party makes a great sign and it does rhyme (sort of), but, as far as the last four weeks were concerned, it proved axiomatic indeed. Roma without Totti was a markedly different beast, have a look: (click to embiggen) 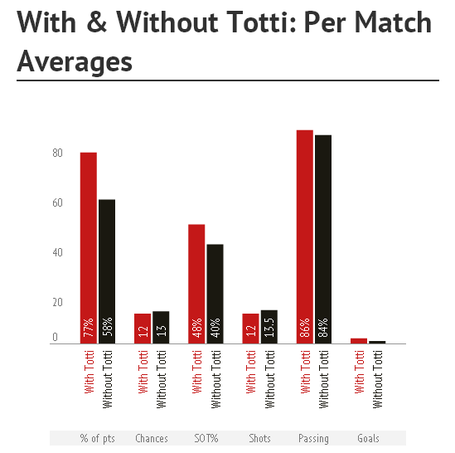 This graph covers per match averages for league tilts before and after Totti left the Coppa Italia semi-final loss to Napoli. As you can see, Roma suffered a nearly across the board depreciation without Totti in the lineup. However, never was the No Totti, No Party ethos more pronounced than in the stats that matter, goals and wins. Sure, Roma was able to pass and create at a relatively equal rate, but the payoff--the part that truly matters--simply wasn't there.

Needless to say, the return of Francesco Totti is a welcomed one.