In a match that certainly needed it, Roma's reserves were up to the task. Thanks to goals from Rodrigo Taddei and Adem Ljajic, Roma defeated Atalanta 3-1, running off their seventh straight victory.

Despite the late goal from Giulio Migliaccio, Roma dominated Atalanta this evening at the Olimpico in a 3-1 victory, their seventh in a row. We billed this matchup as an opportunity for Roma's reserves to shine, and with goals from Rodrigo Taddei and Adem Ljajic, they did just that; the Giallorossi's bench was superb in nearly all facets of the game today.

Every now and then numbers belie the truth; often obscuring or making hyperbole of actual events. This was not one of those days, as Roma, both in figures and fact, ran roughshod all over Atalanta today. Led jointly by Francesco Totti and Gervinho, each of whom had five shots on goal, Roma peppered the Atlanta backline with 22 total shots, seven of which were on target, while Atalanta could only muster ten total shots.

Roma also held sway in the passing game, completing 92% of their passes on the evening, led by Maicon and Radja Nainggolan, each of whom hit upon 98% and 96% of their passes, respectively.

However, the true tale of this match, at least in terms of the clubs respective passing performances, was the extent to which Roma was able to disrupt Luca Cigarini and the rest of Atalanta's midfielders. Led by Dodo's six picks (of all people), Roma intercepted 24 passes and forced 10 turnovers. Simply put, they made life a living hell for Atalanta's attack, who simply couldn't link up, let alone threaten Morgan De Sanctis' goal. 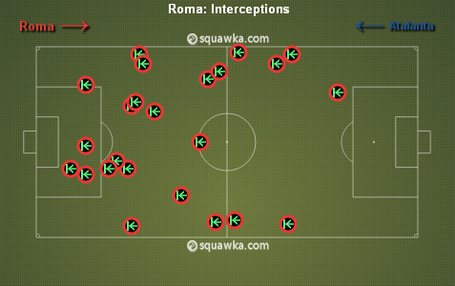 Take a look at this graphic and you can see just how calculating the Roma defense was, picking off Atlanta passes all over the pitch, with a particular concentration on the left flanks. Thanks in part to the 14 interceptions tallied by Dodo, Leandro Castan and Daniele De Rossi, Roma effectively removed Cigarini, Marcelo Estigarribia and the rest of Atalanta's midfield tonight.

Credit to the 21st century kids on this one, not only was this highlight available almost immediately after Taddei blasted it home, but they even had time to hipstagram it with a lovely sepia tone filter. Bravo

Anyway, this will surely go down as one of the club's stranger goals this season. What started as a long, looping chip into Dodo quickly, and strangely, wound up at the feet of Taddei. Dodo, unable to corral the lob, narrowly pulled it off the endline, and blindly flicked it over his head towards the general vicinity of Francesco Totti, who never even managed to get a touch on it, let alone redirect it.

Fortunately for Roma, Dodo's bailout attempt had enough mustard on it to reach Taddei right on the 18 yard line. Taddei seemingly had a beat on the ball, as he was not only in the right spot, but he was ready to pounce on it, unleashing hell on Andrea Consigli's goal. There was little the Atalanta keeper could do as Taddei's shot rushed into the net, giving Roma an early lead.

For Taddei, this marks his second goal of the season, which in turn marks the first time he's scored multiple goals in a season since 2009-2010.

If Roma's first goal was the byproduct of some fortuitous bounces, their second tally was nothing short of perfection, featuring three gorgeous passes from Gervinho, Totti and De Rossi, who eventually found Ljajic for the goal.

The real standout of this sequence was, of course, Totti's pass to DDR. However, take a second look at it and you can see how this moment of perfection could have been derailed were it not for Roma's tremendous chemistry.

As Totti receives the feed from Gervinho, his eyes necessarily drift downwards tracking the ball, but what happened next was indicative of the harmony in Garcia's passing game. As Totti's ball arches from right to left, notice how Ljajic peels back and lets the ball carry over to De Rossi. He didn't over commit and interrupt De Rossi's path, but rather held back and actually gave De Rossi a target to play the ball back, which DDR did every so deftly with his outstep.

Consigli was brought so far off his line due to Totti's pass and De Rossi's movement that all Ljajic had to do was slip it in the net.

Ljajic would once again leave his imprint on this match, this time as the facilitator.Although there's no doctoring of this footage, it starts off right at the key moment, right as Ljajic springs Gervinho, who narrowly avoided being offsides.

With a simple toe poke, Ljajic was able to split two Atalanta defenders, ushering the ball off his outstep to the advancing Gervinho, who then beat Consigli with no issue. Let the replay run through and you can see what a wicked spin Gervinho put on this shot, giving Consligi just enough pause to guess wrong, thereby allowing Gervinho to curl it past his splayed out legs.

We'll throw Atalanta a bone here and include their goal because it really was a tremendous effort from Migliaccio, assisted by some lackadaisical defending from Maicon, who didn't deem it necessary to leave his feet to challenge Migliaccio's headed effort.

This, however, was the only blight in an extremely one-sided affair. Roma marched to their seventh straight victory, but things get a bit tougher next week as they travel to Florence to take on Vincenzo Montella's Fiorentina side.

For Roma, it was a resounding victory, one made sweeter by the performance of several overlooked players, so let's rejoice in Roma's newfound depth.