By defeating Fiorentina 1-0, not only did Roma make it eight wins in a row, but they established a new club record with 25 victories on the year, AND booked their spot in the Champions League next season.

Share All sharing options for: Nainggolan & Ljajic Fend Off Fiorentina

In what was billed by many as the match of the weekend, Roma and Fiorentina played a rather dull 90 minutes of football, leaving the paying customers at a packed Artemio Franchi incredibly disappointed, doubly so for the Viola supporters as Radja Nainggolan and Adem Ljajic teamed up to deliver a 1-0 victory for the Giallorossi, one which echoes far beyond the stat sheet.

Not only was this Roma's eighth win in a row, it was perhaps the biggest of the season, if not the past three years, as Rudi Garcia has officially steered Roma back into the Champions League, all while establishing a new club record for victories in the process, as tonight's victory was Roma's 25th of the campaign.

As far as the actual here and now events of the match are concerned, there isn't much to digest, but let's take a quick look at what the numbers do say about Roma's 1-0 victory.

Judging purely from the boxscore, there was no way Roma should have vanquished the Viola tonight. Vincenzo Montella's side held the advantage in shots (24 to 11), possession (55% to 45%), passing success (86% to 81%) and even blocked eight Roma shots.

There is, however, a good reason for that disparity. Following Radja Nainggolan's 26th minute goal, Roma spent much of the match with eight and even nine men behind the ball. The mission was clear; hold the lead at all costs, Roma had very little to gain by pressing for a second goal, so Fiorentina was pretty much able to shoot-at-will. But what about those chances? 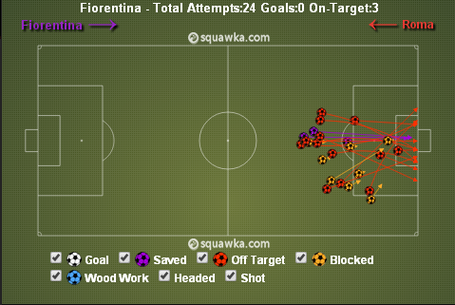 Roma parked the bus for nearly two-thirds of this match, and, brother, they parked it well. As you can see, the vast majority of Fiorentina's shots were low percentage chances, often coming far and wide of the Roma goal. Quite frankly, beyond Stefan Savic's surprisingly accurate shot from 30+ yards out in the 89th minute, Morgan De Sanctis had a relatively stress free evening. In fact, 14 of the Viola's 24 shots came from outside the 18-yard-box, while only three of their 24 were even considered on target; quantity did not equal quality for the Viola tonight, that's for sure.

Beyond MDS' effective organization of his Portuguese speaking backline, the boys from Brazil were on point once again tonight, totaling nine interceptions, 25 clearances, and four blocked shots. For a patchwork defensive line, Maicon, Leandro Castan, Rafael Toloi and Dodo have performed admirably. Dodo in particular is making his case for increased playing time next season, proving to be an active and rather intuitive defender on the left flank.

On to the headlines.

While Nainggolan's name will garner the applause, this goal was all Adem Ljajic. Taking the feed from Maicon, Ljajic, virtually unfettered, cut in from the right wing with only a halfhearted challenge from David Pizarro pushing him even remotely off course.

But once Ljajic blew past the Chilean, that's when the magic happened. Watch as he drives right at four Viola defenders, hits the breaks at the penalty arch and effortlessly threads it through to Nainggolan, who had only to avoid Nenad Tomovic to grab the goal. It was just an incredible display of vision, touch and anticipation from Ljajic, one we've seen with great frequency when he's actually, you know, allowed to play.

Well done on both accounts, and it was enough to make it eight-for-eight, enough for Rudi Garcia to eclipse Luciano Spalletti's club record 24 victories, and enough to book Roma's ticket to the Champions League next year, leading to this:

An emphatic celebration to cap off what has been, thus far, an excellent season, Scudetto or not.

It wasn't just his superb sliding goal that won this acclaim; Roma's #44 was solid in all aspects this evening. Nainggolan's three attempts on goal were a team high, as were his three fouls drawn; he also chipped in one key pass and was a perfect seven-of-seven in long ball attempts. The Belgian also threw in two tackles, three interceptions, and one clearance.

This wasn't Nainggolan's most dynamic performance for Roma, but he was up to the task when it mattered.

If we start off with the goal scorer, it's only fitting we include the man who created the chance in the first place. Whether he's auditioning for Liverpool or proving a point to Garcia, Ljajic has made the most of each and every minute the past few weeks, and tonight against his former club was no exception. Beyond his brilliant assist, Ljajic ripped off two shots (both on target), created two scoring chances, and completed 93% of his passes.

Perhaps the most overlooked centerback in the business was solid as usual tonight. Castan compiled two tackles, two blocked shots, one interception and an astounding 13 clearances. It's about what we've come to expect from Leandro; he just knows where to be.

Despite the exciting implications for next season, this wasn't the most electrifying match we've seen from Garcia's men. Once Roma grabbed the lead, they set up a defensive shell, preferring to preserve the lead rather than gamble for another goal, making the underwhelming statistics quite understandable.

But, hey, who cares? Roma's back in the Champions League and will look to make it nine straight victories Friday evening when they welcome AC Milan to the Olimpico.