Yeah, yeah, yeah, Roma won their ninth straight, whatever, but did you see Miralem Pjanic's goal!? Channeling his inner Barry Sanders, Pjanic juked his way around four Milan defenders to score the goal of year. We offer a blow-by-blow breakdown.

Share All sharing options for: Miralem Pjanic's Stunning Goal vs Milan: A Breakdown

In yesterday's preview, we credited the Serie A schedule makers for giving fans of the Italian game an undisturbed look at two of the league's hottest sides. And, thanks to a completely dominating performance from Roma and a stupendous goal from Miralem Pjanic, this match was, indeed, a feast for the eyes. Well, the Roman ones, at least.

Before we sink our teeth into the match as a whole, a quick appreciation for what is surely Roma's, if not the league's, goal of the year: Miralem Pjanic's 43rd minute masterpiece.

I mean, I'll give this a shot, but my words can't do this goal justice, so I'll just offer my original R-Rated response: "Are you fucking kidding me!?"

This goal had it all: agility, creativity, vision and beauty. Hell, Pjanic even pulled off a Barry Sanders-like juke on Riccardo Montolivo at the nine second mark of that clip. Seriously, check that out in slow motion, he completely shook Montolivo out of his boots; give him a helmet and some shoulder pads and I'm sure Pjanic could run circles around the Patriots.

We all know Pjanic as a midfield maestro, one who can orchestrate an offense from virtually any angle, but have we ever seen that level of creativity, that level of agility, or that level of beauty from Miralem Pjanic?

So, whether you call it a golazo, an ankle breaker, or simply Maradona-esque, tuck this one away in your memory banks; Football doesn't get much prettier than that.

This video gives us a better look at the build up to Pjanic's goal, which was nearly as intricate and just as impressive, few teams on earth move the ball like this set of Romans. 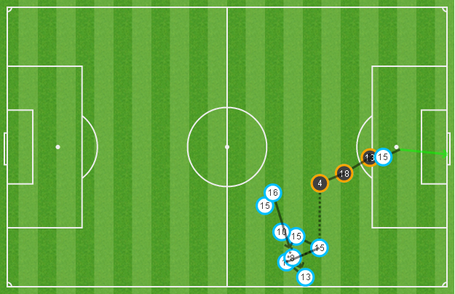 (click on graph for an interactive look at the build up)

When we break down Pjanic's goal move-by-move, it becomes even more remarkable. In a mere six seconds, Pjanic not only orchestrated a series of passes with Francesco Totti, Daniele De Rossi, Adem Ljajic AND Maicon, but he shook off the advances of three Milan defenders before narrowly skirting the ball pass Christian Abiati.

It's not as if Pjanic had acres of space in which to operate, either; by the time Miralem took the layoff from Totti, there were nine Milan defenders between him and the goal. Pjanic didn't hesitate; he breezed past Sulley Muntari, broke Montolivo's ankles and made Adil Rami look like a right fool.

This was simply an amazing goal, one that is sure to make any Top 10 list we create ultimately futile. Seriously, what's the point now? There it is.

Pjanic's goal was an emphatic stamp on a dominating victory, and yet another bullet point on the list of reasons to keep him off the transfer market.

For Roma, this was their ninth straight victory, which, in case you weren't aware, isn't even their longest streak of the season. Let that sink in while we pray for a Sassuolo miracle this weekend.

We'll have a more standard review in relatively short order, but in the meantime, would somebody please find a Zampa-fied version of this goal?