Led by Miralem Pjanic, Roma turned in a dominant performance against Milan, halting the Rossoneri's winning streak, while pushing their mark to nine straight, temporarily closing the Scudetto gap to five points.

Share All sharing options for: Pjanic Inspires 2-0 Victory Over Milan

Now that we've had nearly a day to digest Miralem Pjanic's wondergoal, we'll shift our attention to the match as a whole, which was every bit as impressive. Even though Clarence Seedorf has only been at the helm of AC Milan for a brief spell, Roma may have just written the book on how to depants the Dutchmen's designs, dominating possession, dictating the pace of play, and effectively removing any threat from the Rossoneri attack.

Thanks to Gervinho's follow up goal and Pjanic's bit of brilliance, Roma dashed off to their ninth straight victory, establishing a new club record for points in a season in the process.

While we've seen more lopsided score lines this season, it wasn't Roma's offense that left many slack jawed. Rather, it was the extent to which Roma dominated possession, keeping Seedorf's side to a deplorable 37%, their worst performance of the season. Now, given that huge disparity in possession, Roma's tackling and interception numbers were necessarily depressed yesterday, but when we factor in their respective offensive numbers, Roma's dominance becomes more a factor of passing and positioning than simple defensive pressure, though that was certainly evident in yesterday's match.

Pjanic and friends completed 89% of their passes and, thanks in part to that precision and Garcia's general tactical approach, Roma managed to effectively keep Milan confined to the midfield and neutral zones, forcing 16 turnovers in the process.

Despite their paucity of possession, Milan did manage 13 shots on goal, five of which were on target. However, when we consider the location of these shots, not to mention Milan's average position on the pitch, the shots, even the on-target ones, look relatively innocuous. 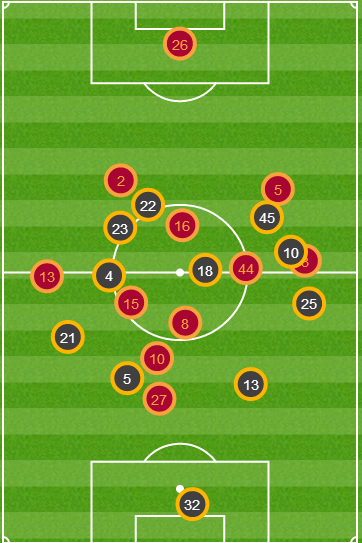 I'll immediately refer your attention to the #45 in this diagram, Mario Balotelli, a man who shoots as often as the wind blows. By holding possession for 67% of the match and passing at a nearly 90% clip, not to mention the pressure applied by Leandro Castan, Roma limited Super Mario to a paltry 30 touches, four turnovers, and zero shots on goal. Yes, that's right; the man who averages 5.1 shots per match was completely and utterly removed from the match.

Next, take a look at Kaka (#22) and Adel Taarabt (#23), two of Milan's most in-form players as of late, neither of whom was allowed to progress more than a few meters beyond midfield. Despite accounting for six shots between them, Roma forced Kaka and Taarabt into seven combined turnovers.

Speaking of shots, let's examine how Roma's possession and positioning impacted the nature and location of Milan's attempts on goal. 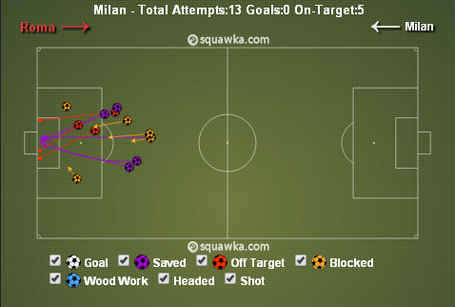 Although they managed 15 shots, half of them came from beyond the 18-yard-box, and of those, four were saved by Morgan De Sanctis, while Roma defenders blocked a further three shots. It's as clear as day, Milan simply did not gain any traction in this match. It's almost as if they just turned and fired the moment they had the ball, because with only 37% possession and 15 shots, that's pretty much what they did; they simply weren't able to form anything resembling a cohesive attack, and certainly not in any high percentage scoring areas.

The moral of the story, when you dictate the pace and nature of the game, good things tend to happen. Roma held the lion's share of the ball, their passes were crisp, and they effectively removed Mario Balotelli and Kaka from the match. Milan couldn't pass, they couldn't move, and they certainly couldn't generate many genuine scoring chances.

Dominant, Roma was utterly dominant is what I'm getting at.

We're already bowed down to Pjanic's goal yesterday, and since Gervinho's was rather non-descript, we'll move right into our man of the match contenders.

Stunners aside, the Bosnian had a brilliant match. Pjanic took a match high 119 touches, 50 more than Milan's leader on the day, Daniele Bonera, while completing 89% of his passes and doling out three key passes. Beyond the golazo, Pjanic put 67% of his shots on target and was a perfect five-for-five in take ons, while drawing two fouls.

Pjanic was damn near perfect yesterday, that's all I have to say about that.

Not the most splendiferous performance ever turned in by Er Purpone, but Totti was quite effective in his 77 minutes of action, making 77 touches; I'll leave the per minute calculations up to you on that one. Totti completed 80% of his passes on the evening, better than his season average, while creating three scoring chances, including his assist on Gervinho's goal.

In a rather muted one-sided match, Totti and Pjanic were Roma's main sources of offensive inspiration. For Totti, it was his 10th assist of the season, making it back-to-back seasons with double digit assists.

Given Pjanic's virtuoso performance, it's a bit hard to select any further standouts, as they're all bound to pale in comparison. However, with his 65th minute goal, Gervinho pushed his tally to 12 across all competitions this season, and, when coupled with his 10 league assists, the Ivorian Enigma is putting the finishing touches on a career season.

While it doesn't look like he's long for Rome, Tolói had himself a match yesterday. Pairing with Castan, the young Brazilian managed a match high nine clearances, rescuing Roma in the penalty area, neutral zone and midfield, showing remarkable mobility and vision. It's fairly safe and patently obvious to say, but this was far and away Tolói's marquee performance in a Roma shirt.

The Remains of the Day

With 35 weeks in the bin and a litany of glad tidings in the books, there isn't much else we can say about this season that hasn't already been said. So, rather than devoting our energy to recounting the many ways in which Rudi Garcia has astounded us, let's send that positive mental energy to Eusebio Di Francesco and Sassuolo. If the Neroverdi can pull off a monumental upset on Monday against Juventus, the next three weeks could be epic.