Thanks to a vomit inducing last minute goal from Pablo Osvaldo, Roma fell to Juventus 1-0. It was essentially a meaningless match, one in which Roma actually held sway, but it served as a reminder that it is, indeed, a long way to the top.

We're all well aware that things have been different for Roma this season, but if this wasn't vintage Roma--cursed at the very death by the footballing gods--I don't know what was. Going into this fixture, we really had no idea how Roma and Juventus would approach the match, in terms of tactics, lineups and sheer effort. All those questions were rendered meaningless by Pablo Osvaldo's vomit inducing 94th minute goal, which gave Juventus a 1-0 victory and established a new league record for points in a season.

Despite those late theatrics, the respective selections made by Rudi Garcia and Antonio Conte did provide insight into their respective valuations of this match. While Rudi Garcia rolled out a somewhat modified lineup, inserting young Lukasz Skorupski into goal and giving Michel Bastos the nod at left back, Antonio Conte's lineup was, minus Gigi Buffon and the injured Arturo Vidal, virtually the same XI we've seen throughout their historic season. This isn't an excuse, of course, but it bears mentioning; Rudi Garcia was, to an extent, using this tilt to test the suitability of several component parts for next season; some shined, some didn't, while Conte was unabashedly chasing history.

I'll spare your eyes and not post a clip of PDO's "heroic" goal, instead, let's take a quick dissection of the numbers and delve into the matches storylines.

If you're a youth coach, or simply an arm chair manager, this one won't  be going into your digital archive; it was an ugly match from both ends, as both sides desperately flailed at the ball, making a mockery out of several clear cut chances, most notably from Gervinho, Vasilis Torosidis and Fernando Llorente, but it was far from the one-sided laugher many of us expected given the lack of gravity in the match.

As far as the actual numbers are concerned, you probably don't need me to tell you how this one played out. Much like last week, Roma was the superior side in terms of possession (58% to 42%), passing (86% to 79%) and total shots (18 to 11), but still managed to come out on the short side of the equation.

As is often and obviously the case, the nature and quality of shots rule the day, take a look: 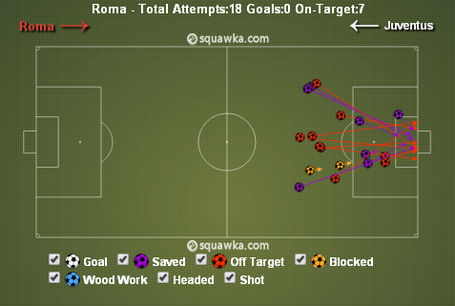 As you can see, the vast majority of Roma's 18 shots were from beyond the 18-yard-box, presenting very little threat to the Juventus goal. Once again, in tried and true Roma fashion, they came up against a once-in-a-lifetime performance from a relatively unheralded goalkeeper, as Gigi's understudy, Marco Storari, made seven saves this afternoon. Really, beyond Gervinho's 38th minute "shot" and Radja Nainggolan's run in the 81st, Roma barely pressed Storari into any real danger.

By contrast, here are Juve's shots 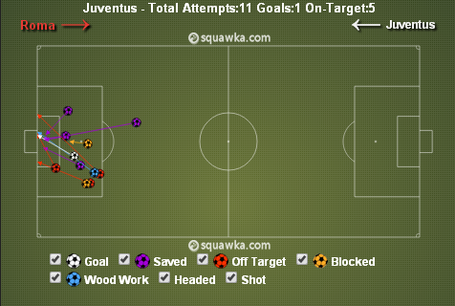 All but one of the Old Lady's 11 attempts on goal came within the 18-yard-box, and five of those were on target; so, not only did they create better chances, they were simply more accurate. While Skorupski turned in a decent performance, Roma were bailed out by the woodwork on Paul Pogba's 44th minute attempt, so this match could have gotten a lot ugly a lot sooner.

We see it virtually every week, but superior possession and passing means little if you can't generate quality scoring chances, which Roma failed to do once again, and while Juve didn't exactly put on a clinic, they did capitalize on some slack Roma defending at the most inopportune moment: 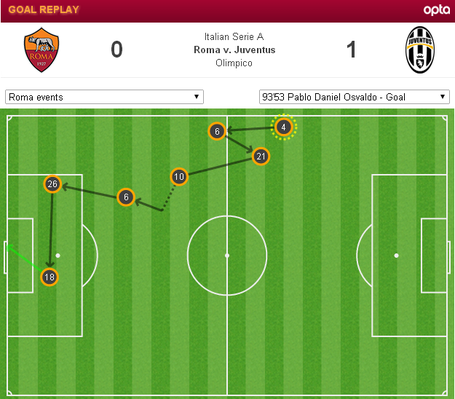 What stands out in this run of play, other than the horrid side of Osvaldo celebrating at the Olimpico, is the utter lack of a defensive effort from Roma in the waning minutes. Juventus carried out a six-pass move from beyond the midfield, encountering little more than a stiff breeze before Stephan Lichtsteiner delivered a cross to an unmarked PDO.

Yes, it was meaningless, but it was still disgusting, mostly due to the absence of effort from Roma's defense. Juve never relents and that's why they're the title holders once again.

This. This. This. This, a thousand times, this. This is all that matters from the remnants of this match, Giorgio Chiellini's blatant elbow to the face of Miralem Pjanic, which really typified the spirit of this match. While it wasn't quite up to derby standards, this match was quite physical and was ripe with retribution, with Chiellini being a prime mover in the affairs of the day.

While Francesco Totti certainly isn't above reproach, Chiellini's 22nd minute challenge was far from clean and required little to no provocation from Totti. Chiellini's yellow set the tone for the next hour of match play, as any and all Romans set their sights on Juve's central defender for the remainder of the match. However, in true Chiellini fashion, he didn't let sleeping dogs lie, dolling out this not so surreptitious elbow to Pjanic's jaw.

I generally don't buy into conspiracy theories, nor do I fan the flames of such, but this incident will be a litmus test for Cesare Prandelli's esteemed code of ethics. There is no debate, he nailed him, it was unprovoked and clear as day. Sure, Prandelli could tow a tough line with Destro because he's got Mario Balotelli to lean on, but will he have the (pardon my French) balls to adhere to his principals with Chiellini, a player whose importance to the Azzurri is unquestioned? Italy isn't exactly bursting at the seams with centerbacks at the moment, certainly not ones commensurate to his talent level, so Prandelli's ensuing actions will be quite telling.

Quite simply, if Chiellini escapes this incident unscathed by either Serie A or the FIGC, Roma's claims of maleficence among the league administration will suddenly have added validity and the screams for retribution will become deafening.

It was a testy match, a disappointing match, but not a damning match; Roma has still conquered a lot of demons this season.

Putting it in Perspective

Win, lose or draw, the atmosphere and pageantry prior to kickoff was a reminder of all that is special about Roma. With the title already ceded to Juventus last week, more than 60,000 Roma faithful packed the stands at the Olimpico, singing their hearts out as their near conquering heroes took the pitch.

The events of the day were really immaterial; this was less a celebration and more a purging of the remnants of Roma's previously failed experiments. This was an occasion to mark all that Roma had left behind--the dropped points, the litany of experiments long on talk and short on results, and the persistent feeling of inferiority; of not having enough mettle to compete with Juve, to reach Europe, or to simply measure up to the passion and pride present in the city streets.

While I'd hesitate to say that Roma's veritable 180 happened in an instant, at some point in the midst of their incredible run to start the season, you just knew something was different about this Roma, that they would no longer succumb to all that had plagued their predecessors, that they could still see the forest for the trees. And now, even in the face of an intestine turning loss meted out by one of their most forgettable sons, Rudi Garcia and Roma remain measured and focused:

This doesn't change the extraordinary season we've had, I am truly happy with this campaign and hope we can set this appointment to face Juve again next year.

Next year. Beyond what is sure to be an experimental Genoa fixture next week, all that really matters at this point is next year. In a measure of how much things have changed in Roma, when Rudi Garcia leads his side onto the Olimpico pitch next season, that will mark the first time in four years that the man in charge in May has actually made it to the following August.

AC/DC cautioned us that It's A Long Way to the Top (If You Wanna Rock ‘N Roll), so consider 2013-2014 the opening song of what is sure to be Roma's greatest album.