Roma's Goals of the Year: Mehdi Benatia vs Sampdoria

Mehdi Benatia wasted little time in impressing the Roma faithful. In only his fifth appearance for his new club, Benatia turned in what was perhaps his finest performance of the season, highlighted by his 65th minute slaloming goal vs Sampdoria.

Share All sharing options for: Roma's Goals of the Year: Mehdi Benatia vs Sampdoria

The second installment in our arbitrary analysis of awesome goals is Mehdi Benatia's first goal of the season against Sampdoria. Benatia has more than lived up to his billing during his first season in Roma, but did any of us actually expect him to score five goals this season? Benatia's unexpected offensive output actually put him atop the club leaderboard for a brief moment in time, but his first may have been his finest.

This goal, as surprising as it was, exemplifies what makes Benatia so unique, as nearly all facets of his game were present in this six second span.

Right off the bat, watch how Benatia shadows the Samp player furthest up the pitch, ostensibly to halt any counter attack, but rather than being content to keep the attacker in front of him, notice how Benatia, sensing an opportunity to create a turnover, springs into action to intercept the pass. What happened next was more akin to something a diminutive Spanish midfielder might do.

Benatia quickly lays it off to Miralem Pjanic, hesitates a second and then charges forward, creating a moving passing triangle with Daniele De Rossi and Kevin Strootman. That's three pretty massive dudes doing their best Barcelona impression, working the most intricate of passing maneuvers in a confined area; pretty remarkable.

Check out the run of play in graphic form. Benatia charged straight ahead while facilitating some pretty succinct passing in tight spaces 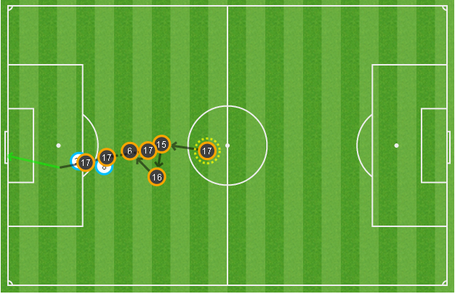 From there on out, it was all Benatia, as he pulled off two successful dribbles and evaded two more misguided tackles from the Sampdoria defense, all before being taken down by Daniele Gastaldello.

As amazing as the buildup was, let's take a moment to appreciate the actual goal. Benatia is a massive man, nearly 6'4" and 200lbs, so the fact that he was able to avoid as many defenders as he did and still manage to tuck the ball inside the post with his left foot, all while falling down, is nothing short of remarkable.

Since it's lookback season, venture back to July of 2013 and take a look at our initial analysis of Benatia; he exceeded nearly every reasonable expectation.

This run of play, which took all of six seconds, was a showcase for Benatia's defensive acumen, his patience, his agility and his sheer athleticism; defenders his size shouldn't move like that.

Roma knew they were getting a top-notch defender when they shelled out nearly €15m for Mehdi Benatia, but who could have envisioned the Moroccan providing this much of an offensive lift? Benatia's five goals represents nearly 50% of his career haul, while his 88% passing was five points higher than his career average, he also set career highs in dribbles and shots.

With the year he just turned in, it's little surprise that the Manchester City's of the world have come calling, but if Mehdi Benatia isn't the type of player you hang onto, then who is?