Well, here it is, Roma's first co-creation with the kingpins of athletic accoutrements, Nike.

After nearly a year of speculation, the day is finally upon us, Roma's first foray into the bold world of Nike created kits. And, wouldn't you know it, the kits are nearly identical to the ones that first leaked out last December. While the kits bear a resemblance to 2013-2014 variety, they are decidedly more minimalist.  The kits will be available online at Nike.com and in Italy beginning June 6th, and worldwide on July 17th.

As you can see, Roma once again opted for the collared look, but this version is sleeker and more, I don't know, post modern, with little to no piping on the collar, though the inside is emblazoned with La Roma Non Si Discute Si Ama.

There will also be some changes to the kits/sock combos:

The new home shorts are white, while the new home socks are no longer black, but instead AS Roma red to echo the traditional appearance of Roma sides. On the back of the sock is a tonal stripe of chevrons.

"AS Roma is a club with great football history and traditions, with its sights set firmly on the future, said Dermott Cleary, Vice President & General Manager of Nike Football. "Today's presentation of the new kit marks the start of an exciting new partnership for Nike and AS Roma".

"The launch of the new home kit is a great way to officially announce our partnership with Nike. The jersey exemplifies our goal of combining tradition with innovation. We look forward to showing this kit to the world and I am confident that our fans will be proud of this jersey" added James Pallotta, President of AS Roma 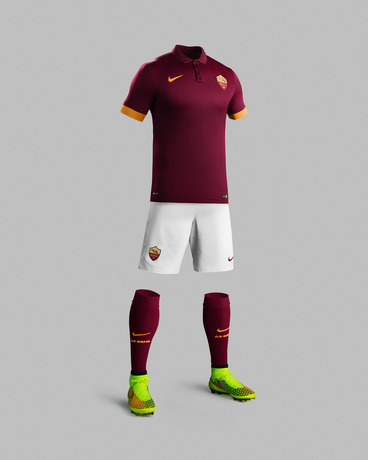 Of course, the elephant in the room is the lack of a kit sponsor. While we all pictured a big ole VW smack dab in the middle of these shirts, Roma, for now, remains sponsorless, as all potential suitors have apparently balked at their  €15m asking price.

So, what do we think? Are we impressed by Nike's first effort?