Given the age and cost of Roma's most recent acquisitions, is there any reason to worry about the future stability and continuity of the club?

This piece originally started as an off-hand idea that I might be able to find some sort of correlation between the average age of Roma’s squad and place in the table. It turns out finding the data was near impossible, so I set about doing it myself. I quickly realized it was going to take too long to find the average age for the entire roster. Insert Salih Uçan do it joke here. So I took some shortcuts to one make the job more manageable. I am only looking at the average age of the starting eleven.  The biggest question here is how you do that without being biased. Well I just looked at amount of starts and used the top eleven with the most starts. If anything, I think this set of data might be more relevant than using the entire roster because let’s face it, does it really matter if some of the bench spots are filled out with the primavera? So below is the data I gathered up for the years since the Scudetto. 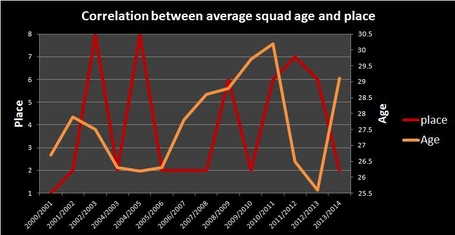 As you probably could have guessed, Roma is too much of a roller coaster ride to have expected to see any correlation. At least I got a pretty picture with some red and yellow lines out of it, though. They always told me my college education would be good for something.  But I still think there is something to be said from the data. When we had the run of second place finishes in the mid 2000’s, the squad remained largely unchanged for a good stretch of time. So I think something can be said about the importance of squad continuity.

When I first saw our transfers, really only one thing came to mind. We have somehow found a way to get older. Even the purchase of Juan Iturbe doesn't really take that taste out of my mouth.  Squad continuity is often talked about when selling our youngsters after a brief time with the club for profit. Why isn't this same logic being applied to the players being brought in with only a few years left in the tank? Yes, Cole, Maicon, and Keita came for free, but that also means they will leave for free. So it puts us in yet another vicious cycle of squad turnover. The only difference is now Champions League qualification becomes essential.

The men in suits deserve a lot of praise for the success of last season, and to a certain extent the transfers made this summer. But I think it should be recognized that these moves are a gamble. Yes, we are taking a gamble on Ashley Cole, Seydou Keita, and Urby Emanuelson even though they came for free.  The suits have put themselves in a must win now position. Failing to qualify for Champions League at this point leaves us with very few options to fill holes in the lineup, other than selling players. I think the gamble is worth taking for Francesco Totti’s sake, but it should still be recognized as a gamble.  Maybe this makes the moves all that more spectacular a year from now.

What the future holds still needs to be written; maybe we can do our part in helping to write it by using more cheerleaders. But in a world as unpredictable as Roma, I’m not sure I'd have it in me to take the gamble that Walter Sabatini and James Pallotta are undertaking.  The rewards could give us immeasurable bliss, while the consequences could put us back at square one. If there is one thing the purchase of Iturbe does, it reassures me that Sabatini realizes the risks and is going to do everything he can to make sure the gamble pays off.

As always, if you think I’m a dumb ass, feel free to tell me in the comments. I’m sure you didn't need reminding. The world would be a pretty dull place if everyone agreed with me. Also would like to thank Bren (everyone is Bren) for welcoming me aboard. Hope to contribute more especially when I get ideas like this. This place is unlike any other in the vast ocean of the internet. In this small corner people from all over the globe, each with their own unique story have found a place to talk about the one thing that connects us all. I’ll be around in the comments like always.