Analyzing the Highs and Lows of Juan Iturbe

Juan Iturbe is expensive, but he's also young and quite inexperienced. Using a couple of examples from last season, we examine the peaks and valley's of his game.

Share All sharing options for: Analyzing the Highs and Lows of Juan Iturbe

While we've spent much of this week dissecting the Juan Iturbe transfer--the costs, the impacts on team cohesion and future spending on the transfer market--we haven't really talked about him as a player. The first thing we must recognize is that he is still very young and inexperienced. Iturbe's debut Serie A season came at only 20 years of age, so the mere fact that he made 33 appearances, including 29 starts, not to mention scoring eight goals and finishing second in the league in dribbles, were feats in and of themselves.

By any measure, his was a successful rookie season, but when you spend nearly 30 million on a player, it's only prudent to analyze how and where he flourishes and falters. So, as always, we'll take a look at some extreme examples of each.

In what was only his third Serie A appearance, Iturbe was a monster on both ends of the pitch, ravaging Bologna for 68 minutes and earning a perfect 10 match rating. At this point in his career, age or not, Iturbe's greatest skill is taking on opponents in one-v-one scenarios. On this particular afternoon, he absolutely eviscerated the Bologna defense to the tune of a ridiculous nine successful dribbles. 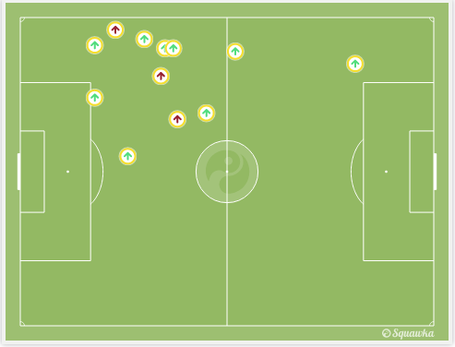 This one doesn't take too much explanation to understand, but you'll notice that Iturbe used his pace and creativity to get past defenders in his own third, to move up the flanks, and to cut inside. It takes a lot of balls to dribble your way out of your penalty area, and Iturbe did just that in this match.

Despite the fact that Verona won this one rather handily, much of that was due to Iturbe; he was the prime mover for Hellas, taking 69 touches in only 68 minutes. At 20-years-old and in only his third appearance, Iturbe was already asserting himself in Verona's pecking order. And, as his perfect rating would attest, he was flawless. For the day, Iturbe blew past nine defenders, created two scoring chances (including an assist), drew three fouls and completed an impressive 38% of his crosses. As we'll see below, Iturbe made use of the entire pitch, but turned the right flank into his de facto playground, but one often overlooked facet of Iturbe's game was particularly impressive. 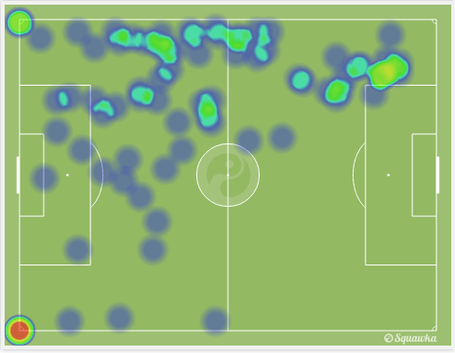 We marvel at what wingers can do with the ball at their feet, but often times it's the simple effort they give on the defensive side of the ball that wins the day. Just look at the concentration in Verona's final third; no one could accuse Iturbe of not tracking back in this match. Indeed, over 50% of Iturbe's on-the-ball actions occurred in Verona's final third. For the match, Iturbe was a perfect two-for-two in tackles and intercepted two passes in the final third.

For a player as hyped and lauded for his abilities on the ball, it's quite impressive to see Iturbe commit as much to defense as he does to attack. Lest you think this match was an anomaly, Iturbe managed 1.7 tackles per match, better than any of Roma's wingers and second most among Verona's attacking players last season.

Now, I didn't plan it this way, but as luck would have it, Iturbe's worst performance of the season was against that same Bologna side. 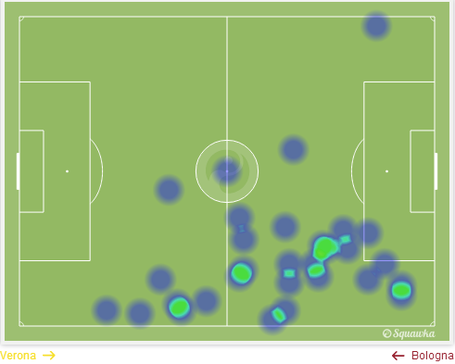 The biggest difference between Iturbe's first and second turns against Bologna was simply the space he occupied on the pitch and the amount of touches he took, or conversely, was denied. In this nil-nil draw, Iturbe only found the ball 23 times in 77 minutes, that's a 66% drop in touches compared to the first match, and in nine fewer minutes, no less.

Whether it was down to Bologna's defensive pressure and positioning, or simply a lack of focus or effort on his part, Iturbe was rendered completely useless in this match.

But, as his €30 million price tag would suggest, this Iturbe was rarely seen.

As always, these were extreme examples meant to highlight the extreme fluctuations often present in players as young as Iturbe. The conclusions made from these examples may be elementary, but that doesn't diminish their importance for Iturbe and Roma's success over the next five years.

For Iturbe to be truly effective, he needs to be active--to seek out the ball, to move, and to take on defenders anywhere and everywhere--he can't simply strafe up and down the right flank and hope the match unfolds for him; a fact clearly evident to Bologna, as they seemingly designed to remove Iturbe from the second match by limiting his touches and keeping him away from the attacking third.

This, incidentally, is another area of concern for Iturbe; how will he adapt to the adjustments opponents make the second time through the fixture list, to say nothing of the year-to-year modifications made by the league's other managers. Given his age and short resume, this is a big concern; as Yogi Berra once said, "90% of the game is half mental." Monitoring the manner in which he handles these tactical adjustments will be key for Rudi Garcia in the early days of this partnership.

Anyway, back to the positives.

While Iturbe is most definitely a right winger, one with a wicked left foot that is most lethal when he cuts in, Iturbe's 39 chances created last season were pretty evenly spread across the attacking third, so he has the capability and presence of mind to work his magic elsewhere. Furthermore, Iturbe's willingness and ability to cross the ball is something Roma's wings were desperately lacking last season. To wit, Iturbe's 26 successful crosses were more than all of Roma's nominal wingers--Alessandro Florenzi, Gervinho and Adem Ljajic--managed last season, 26 to 21, and he completed a respectable 21% of them, which would've trailed only Totti and Miralem Pjanic on Roma last season. And this all came from a left-footed right winger. Impressive indeed.

And then there is the simple matter of his movement, which can be extraordinary. Seeing what a tremendous impact Iturbe had on Luca Toni's ability to find easy goals, by pulling defenders away from him, you can't help but get excited at the prospect of Iturbe and Mattia Destro teaming up. Part of what makes Destro so effective, and really, part of what will strangely hold him back from being a global icon, is that so much of his game is predicated upon smart and incisive movement, rather than an array of step overs and body feints, the tricks that put posters on childhood walls.

We saw this very same dynamic at play last season when Destro and Gervinho teamed up in the season's final months. The curious hybrid known as Destrinho combined for several goals last season, finishing as one of the league's most productive scoring tandems, most of which stemmed from that very same phenomenon; Gervinho's pace and dribbling opening up lanes for Destro to exploit. So, as much as we'll delight in seeing Iturbe reap the rewards of Francesco Totti's passing to find his own shots on goal, we have to recognize and appreciate that Iturbe is a complete talent, one whose sheer athleticism, touch, and vision will benefit Roma's offense as a whole, with Destro being the biggest recipient.

While time will ultimately tell if Iturbe fits the bill as Roma's third most expensive transfer ever, the skills he flashed last season, and those that remain unearthed, combined with the effort he exerts in all facets of the game, should ensure that this €30 million gamble is as safe as they come.