Roma's Attack Should be Among Italy's Best This Season

Led by Francesco Totti and finally blessed with some continuity, Roma's attack should be among Italy's finest this season.

Share All sharing options for: Roma's Attack Should be Among Italy's Best This Season

With the fates of Mehdi Benatia (understandably) and Mattia Destro (inexplicably) hanging in the balance, now seems a strange time to begin our season preview series, but the season opener against Fiorentina is only six days away and patience is a virtue I do not possess. So please keep a virtual asterisk handy as you read our first installment.

Whether it was under the myopic, attacking eye of Zdenek Zeman or the steadying hand of Rudi Garcia, Roma has not suffered for goals in recent times, topping 70 goals in each of the past three seasons. Now that Roma has actually, you know, kept the same manager for two years in a row, the Giallorossi's attack will finally be imbued with some continuity. Not only are all the familiar faces returning to the frontline, Roma has also recruited an impressive new cast member in the form of €22m signee Juan Iturbe.

So, unlike summers past, there were no awkward team building exercises hoisted upon the squad, no name tags, no meet and greets and no adjusting to a new system. It's a setup that would surely please The Rock, because everyone knows their damn role and will shut their mouths.

Given that set of circumstances, what can we expect from Garcia's attack this season?

Before we answer that, a quick look back to last year...

Roma's offense last season was, in a word, prolific, as their 72 goals scored trailed only Juventus and Napoli. Roma's 63 goals inside the area were second in the league and indicative of their ability to create and capitalize on scoring chances in high percentage areas. Furthermore, Roma's offense was nearly as effective on the road as it was at home, as the club ranked top five in goals per match at home (1.16) and away (0.74).

All of those goals came from an average of 15.63 shots per match, which was 3rd in the league, with 8.21 of those coming inside the area, second in the league. Throw in their 45% total shot accuracy (5th in the league), league leading passing percentage and second best possession, and we can see why Roma's attack was so successful last season. Garcia's offense moved the ball efficiently and effectively, showing a keen ability to find the sweet spot, as it were, right in front of the goal. 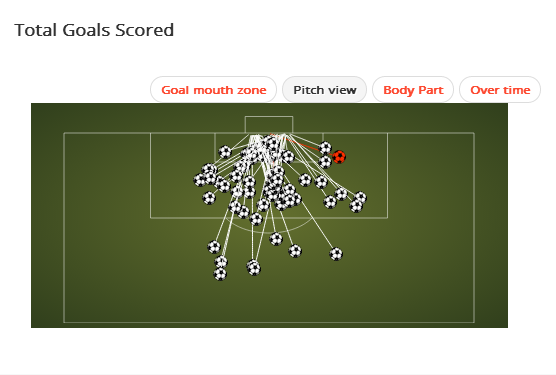 With one prolific season under their belt, a full cast returning, and a deeper understanding of Garcia's schemes, expectations are high for Roma's offense, so what exactly can we expect from Roma's forward rotation and what does each member bring to the table?

We have already/soon will discuss a few of these names at length in our prospect countdown, so we'll keep it brief and take a quick look at their resumes, their roles, and what we'll call the threat-to-the-keeper factor, a completely arbitrary metric I made up while drinking an iced cappuccino this morning.

Since we covered Sanabria in depth during the prospect countdown, we'll leave him out of this discussion, while the club officially lists Alessandro Florenzi as a midfielder, but we've covered him in depth here and here, so for the sake of brevity, we'll leave it at that. 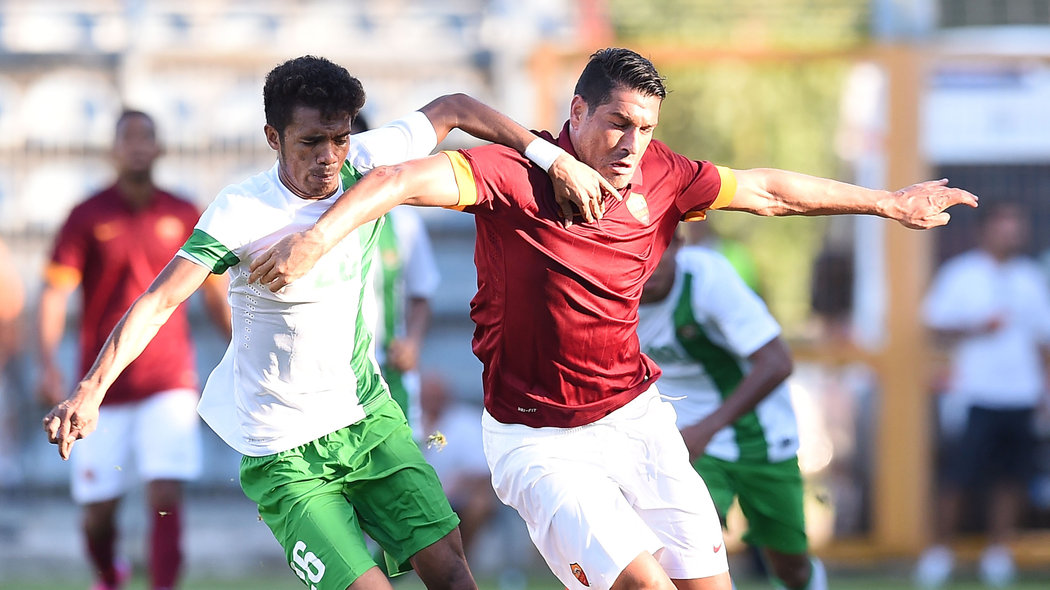 We've chronicled the Borriello drama many times in this space, suffice it to say, you'd be hard pressed to find a stranger career in club history. He is, in many ways, an anachronism, a 20th century player with the misfortune of playing in today's modern game. However, as we discussed earlier this summer, Marco is, despite being maligned because of his lofty salary, a fairly effective player when utilized, averaging 0.46 goals per 90 minutes during his last run of significant minutes with Genoa in 2012-2013.

Of course, what makes his career so strange is that despite those decent numbers and generally being a well-liked guy, he's been a bit of a nomad throughout his career. Hell, Roma has even sent him packing on three different occasions since he signed with the club.

It's been a strange ride for Roma and Borriello and in this, his last season under contract, it's anyone's guess as to whether not he'll actually suit up or spend his final season on yet another loan.

He can still bang ‘em home pretty regularly, so he's a threat to the keeper in that regard. Of course, if you're a keeper and you see Marco heading towards your significant other after the match, you run and run fast, because 10 out 10, Borriello will steal your girl. 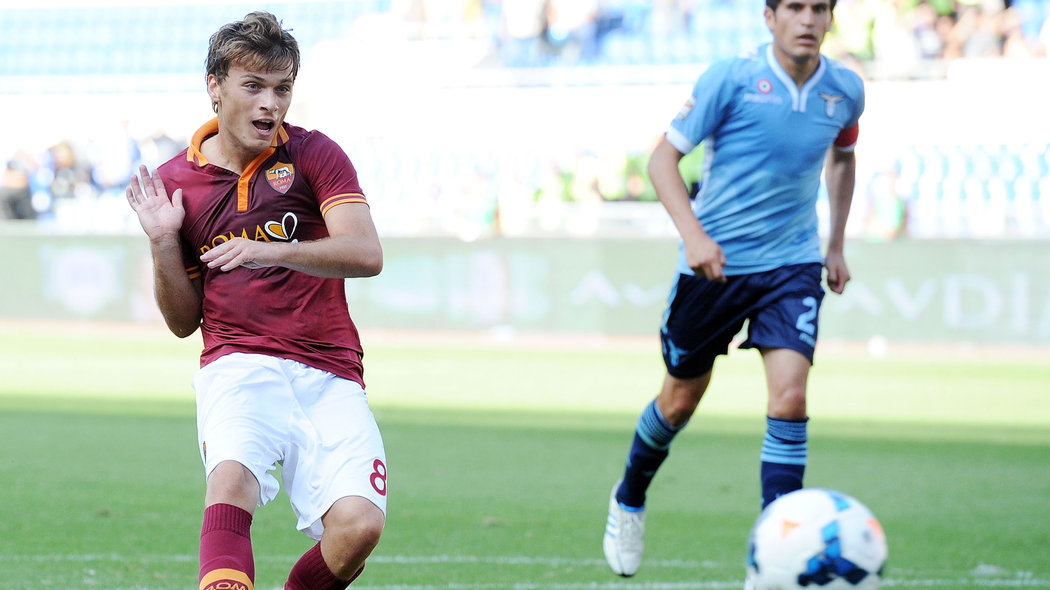 Nutella's versatility, much like the spread for which he's named, is his calling card. Ljajic can play on either wing, as an attacking midfielder or a second striker. Honestly, he may be the only player on the squad (under the age of 37) capable of playing anywhere at the head of the 4-3-3, as he can score from either wing, while his ability to drop back into the hole gives Garcia's offense additional on-the-fly tactical options.

Ljajic should have no trouble finding playing time, but we're still left to wonder, is this the year; the year that talent, timing and effort finally collide to make Ljajic a star.

Ljajic has proven to be an efficient and effective scoring during his brief Serie A career, so he's certainly capable of beating any keeper in the  league. 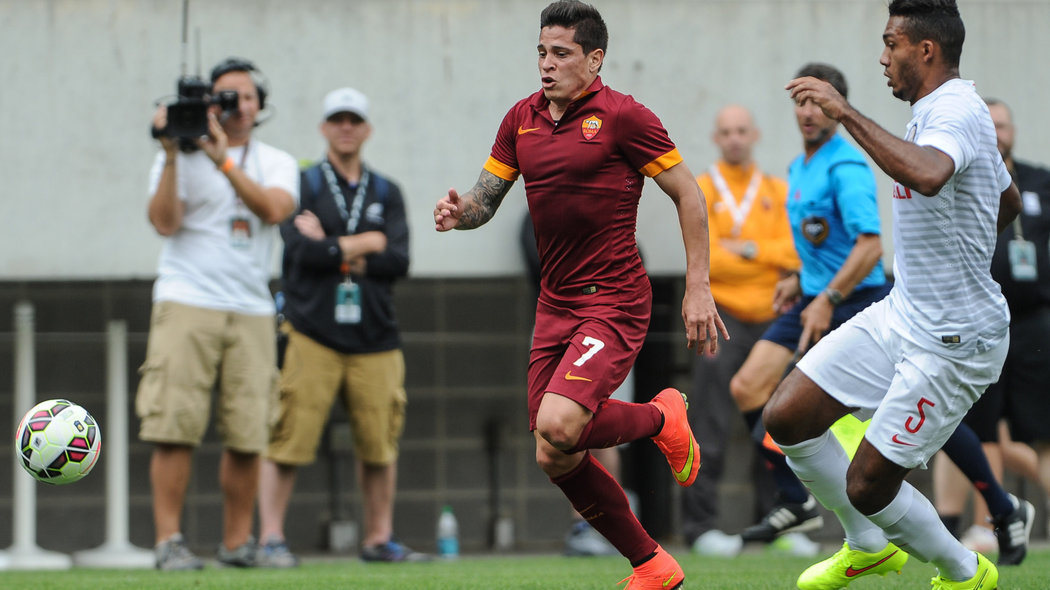 A few preseason head turners and some nice photos.

Iturbe's European career is only 43 matches long, so he is still somewhat of an unproven commodity, but one in whom Roma felt comfortable in making a potential €30m investment. That kind of money won't guarantee him minutes or touches in the early going, but he was one of the league's most dangerous players on the ball last season, so he'll make his mark before too long and should, when paired with Gervinho, give Roma the fastest attack in the league.

While Iturbe can play on either flank, his nominal home will be on the right flank. However, as we've seen this summer, Iturbe is a threat EVERYWHERE. So, once he's acclimated, look for Garcia to give him some lateral mobility on the pitch.

While he scored eight goals last season and put nearly 50% of his shots on target, his professional track record is still short. Throwing him into such a talented mix could see his goal haul go either way; he could benefit from Totti and Ljajic's playmaking and crack double digits, or he could find touches harder to come by than in Verona and remain around the seven or eight goal mark. 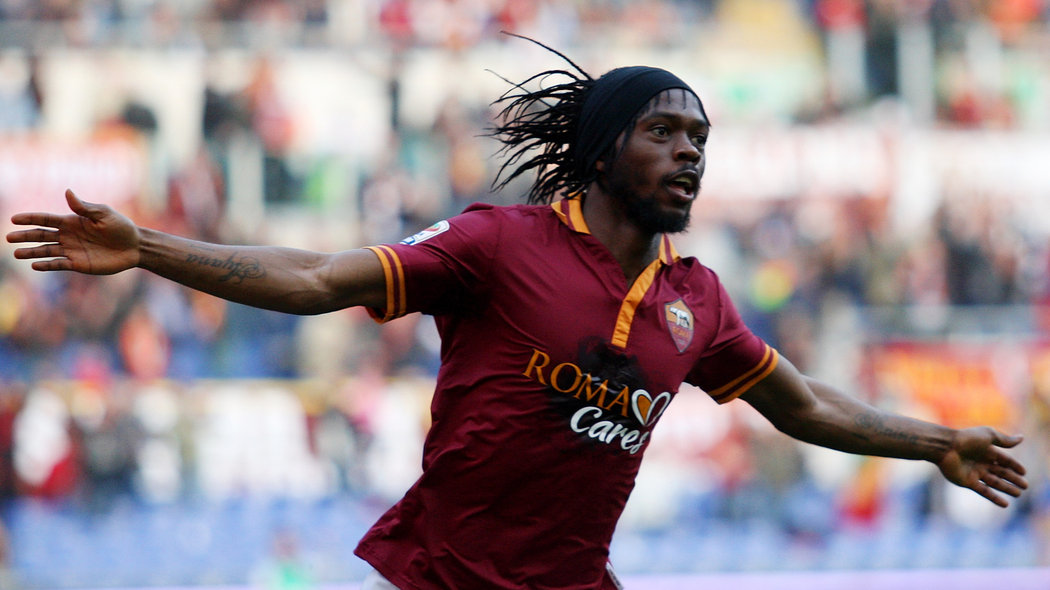 Running. Running fast. Running towards the goal. Usually from the left side of the pitch.

Gervinho tied for the league lead in assists, led Roma in dribbles, and was second in goals last year. But who's the real Gervinho, the one who ravaged Serie A sidelines like The Predator during his first season in Rome, or the man relegated to the bench in London?

The answer to this question could make or break Roma this season.

Yes, he scored nine goals and converted roughly 18% of his goals last season, but he also was among the league leaders in clear cut chances missed. You take the good and you take the bad with The Predator. 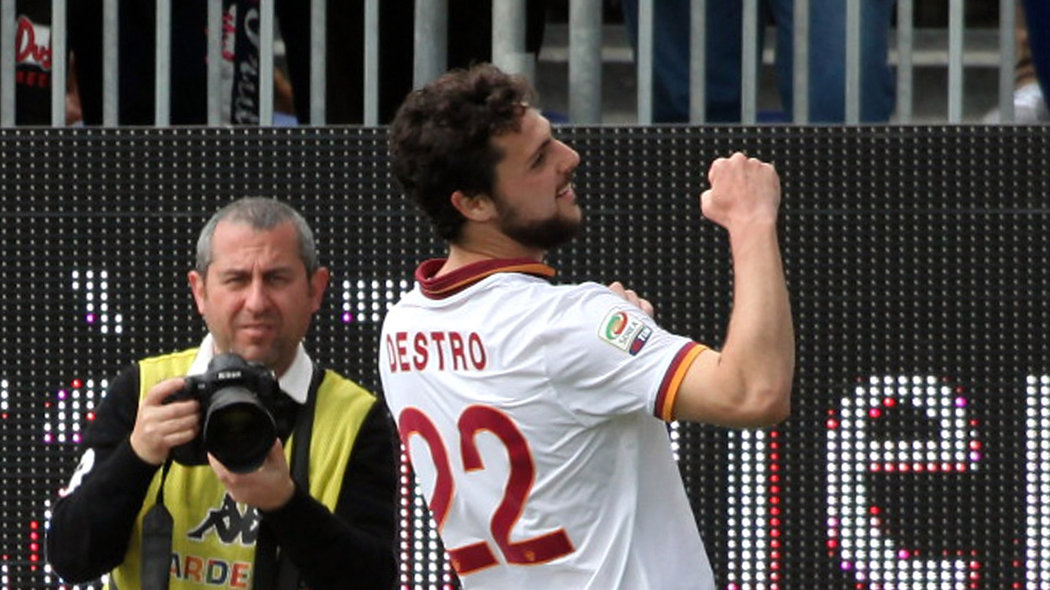 The only thing keeping him away from a perfect 10 is a history of injuries. Yes, he led the league in goals per 90 minutes and converted at an absurd 37% rate last season, but he's only made 30 appearances once in his young career. Injuries or not, he'll have a tough time remaining at such lofty heights, but whether you call him a poacher or Italy's best striker, the kid can find the goal with ease.

*You know, if he's still here. 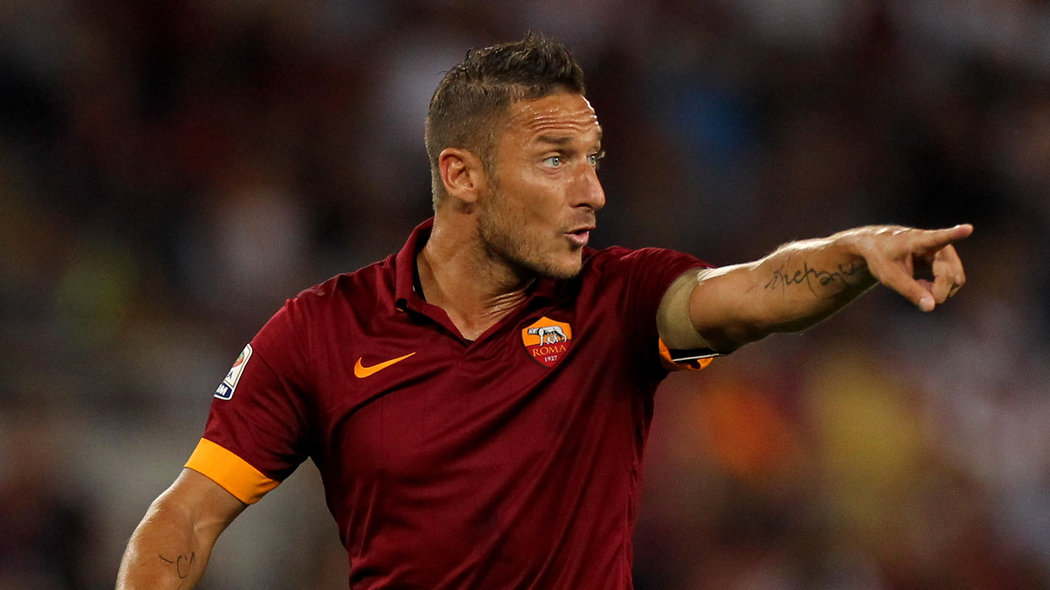 561 appearances, 235 goals, 142 assists (league only, assists may actually be estimates)

You don't need me to tell you what Totti means and what he does for this team, he is the Alpha and the Omega, the head and the heart, the be all end all, he is Roma's double stuffed Oreo.

Totti has been among Roma's top three scorers in each of the past three seasons, and god knows how many before that, while also leading the club in shots per game over that same span. Really, the only factors keeping him from a 10/10 are his shooting accuracy and conversion rate, which are somewhat understandable given his astronomical role in Roma's offense; defenders swarm on him like no other, so the mere fact that he continues to lead the team in attempts is further testament to his attacking capabilities.

He may not crack 10 goals this season, but you can bet your bottom dollar he'll be involved in dozens of them.

Roma's envoy of offensive talent runs the gamut of attacking options, which gives Garcia options aplenty and keeps opponents on their heels. Gervinho and Iturbe provide the blinding speed, with the latter giving the additional benefit of precision crossing, Totti and Ljajic are the movers and shifters, pushing and pulling defenders to manipulate space in the attacking third, while Destro is the prima punta, providing the threat directly in front of goal, though he is remarkably adept at manipulating space in his own right.

Roma's forward ranks are as good as any in the league. The added year of familiarity and the infusion of Juan Iturbe's enormous skills should only stand to make Roma even more dangerous.

We don't know where they'll finish yet, but Roma's forwards are sure to entertain with their speed, their precision and their panache.