Speculating on Roma's Attack: Who Will Play and When?

Did we really spend 30m for Iturbe to keep Marco company on the bench? Where exactly does Marco Borriello fit into the season’s plans? How deep is Rudi’s love for Gervinho? Will Totti show signs of slowing down? How many minutes can Florenzi get in a season? Can Adem see more minutes then there are calories in a jar of nutella?

Share All sharing options for: Speculating on Roma's Attack: Who Will Play and When?

Competing in three competitions necessarily means there are more minutes to go around. So, let's take a little different look what this means for Roma's attack; a subject of recent debate around here. Let us begin by breaking down how the minutes were distributed last season. Since Romanisti seem to love pretty pictures, we will keep them coming. So here is a graph of minutes played among our lovable attackers in Serie A last season. 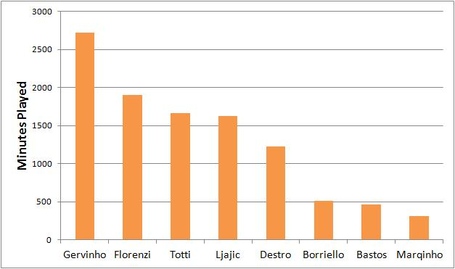 With Michel Bastos' and Marqinho's services no longer being required, that is roughly 800 minutes that need to be replaced.

Next, we need to count the minutes the Coppa Italia adds to the season. Considering the first game is almost guaranteed to be youngsters, that leaves four games at most for Roma's more experienced attackers. So, assuming we make the final in the Silver Star competition,  we'll add 1,080 minutes.

That only leaves Champions League games to account for, which would be at a minimum six games. But for the sake of the conversation, let's assume there will be four more games, with Roma either advancing to the quarter finals or falling back to the Europa League. So we'll add 2,700 minutes for Europe competitions.

In total, there are 4,580 more minutes that need to be distributed next season, assuming everyone plays at least the same amount as the previous season.  I just figured I would throw the numbers out there so people can speculate on just how those minutes might end up being distributed.

Personally, I see Tonny Sanabria getting Marqinho-level minutes over the course the season. That probably sounds more like an insult than it was meant to be, so 500 minutes. Maybe Marco finally stays a whole year and doubles his minutes, so he also gets 500 minutes.  Yao Kouassi Gervinho's minutes are probably fairly close to their maximum. Considering the ACON, which will see him miss a few games, but I'm sure those minutes will be made up in Champions League. Maybe Francesco Totti stays healthy and gets close to the 2,800 minutes he had under il boemo. So that's roughly 1,000 minutes. Hopefully Mattia Destro stays healthy for a whole season and takes on an extra 1,000 minutes.   I really want to see Adem Ljajic get more minutes than there are calories in a jar of nutella (1,900 calories) so that's an additional 300 minutes.  That leaves me with 1,300 minutes and I have not even mentioned Juan Iturbe yet. Well, if we give those to Iturbe, then we run out of minutes to give Alessandro Florenzi.

There are a lot of variables to consider and I'm sure I have not thought of them all. With Walter staying quiet, and four weeks until the season starts, all you can really do is speculate.

So how do you see the minutes being distributed this season?