Roma has a lot of impressive youth prospects, so why not rank them? Part I features two born and bred Romans, each of whom has already featured at the senior level.

Outside of my CdT duties and love for Roma, I delight in being a Chicago Cubs fan, which, if you know anything about baseball, isn't an easy task. The thing about Cubs fans is that, out of necessity, we're always focused on the future; a task made easier when the club's minor league affiliates are brimming with young talent. Fortunately for those of us foolish enough to follow a team that hasn't won the World Series since 1908, the crop of youngsters currently working their towards Chicago may finally be able to lift the dark clouds that have hovered over Wrigley Field for, oh, the past century.

The best part about being a baseball fan in the digital age is the infinite span of information available on anything and everything pertaining to America's pastime. From basic things like all-time strikeout leaders to the minutiae of a hitter's average on breaking balls in an 0-2 count during a day game on weekends, the storehouse of baseball information and insight is only limited by one's imagination and curiosity.

Now, you don't have to be a fan of a downtrodden team to enjoy speculating about the future. So, if that's your bag, the internet has got you covered. Leading up to every season, the ‘Net (remember when people thought that nickname would stick?) is littered with lists counting down baseball's most exciting young prospects, poking and prodding, picking apart every aspect of a young mans still unrefined game.

This got me to thinking. Roma's array of young footballers is as impressive anyone's in Italy--we read their names in broken Italian, scour YouTube for a halfway decent scouting video and imagine the day they'll satiate our collective ‘Hunger for Glory'--so why not, in classic baseball fashion, rank them in a semi-objective exercise?

Over the course of the next few days, we're going to rundown the top ten prospects in Roma's system; we'll talk about how they got here, what they're capable of and what they might become. For the purpose of this exercise, and for the sake of time, we're going to limit the discussion to players aged 23 and under; call it an Olympic-style assessment.

I mean, when you're dubbed the ‘Next Zlatan', you deserve at least a cursory glance. Berisha is only 18-years-old and has only a dozen Primavera appearances under his belt, so we're a ways away from seeing #DaretoValmir conquering the social media sphere. But Berisha's pre-Roma career was remarkably enticing. Not only was he the leading scorer at the U-17 World Cup last year, he banged home an incredible 24 goals in 31 appearances for Halmstad BK's U-19 side, to go along with eight assists.

He may not be as statuesque as Zlatan, but he appears to have a well-rounded and explosive game; he's definitely one worth keeping an eye on. Berisha is tied to Roma through 2018, though if his youth career is any indication, we'll see him much sooner.

We should also throw Luca Antei under this heading. The only thing keeping him out of the top ten, really, is the increasing likelihood that he never actually has a career for Roma. But, for more on what he could bring to the club, check out what we had to say earlier in the summer.

Now, on to the matter at hand. We'll start off the countdown with Roma's ninth and tenth ranked prospects, according to us, your haphazard experts. And, hey, wouldn't you know it? They're both Romans. 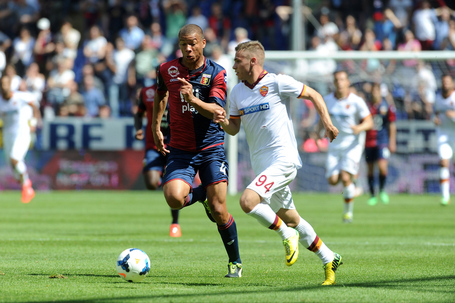 Ricci started his Primavera career in 2012 when he made seven appearances as an 18-year-old; an inauspicious start to what is quickly becoming a promising career. Since then, Ricci has made a total of 53 appearances for Roma's youth team, putting in over 3,000 minutes and scoring eight goals in all competitions.

Ricci's steady progression at the Primavera level did not go unnoticed in the Eternal City, as the latest in a long line of local boys to play for the club made his senior debut on December 1, 2013, coming on as an 87th minute substitute for fellow Roman, Alessandro Florenzi. Ricci would make four appearances for Rudi Garcia last term, starting the season's last match against Genoa. All told, Ricci played 68 minutes at the senior level last season.

Ricci has two caps for the Azzurrini at the U-20 level and will spend this season in Serie B with F.C. Crotone.

While it's tough to peg down a player as young as Ricci, at this stage in his career, though he's featured as an attacking midfielder and quasi-center forward, is at home on the left wing, where he featured for Garcia in his trial run last spring. Ricci is ostensibly a left-footer, so his eventual position may be a matter of conjecture and will most likely depend on his future manager's foot/wing preferences, but if he switch sides and learns to cut in on that left foot (which he sort of did right here), we may have a poor man's Giuseppe Rossi on our hands.

While Ricci isn't blessed with Gervinho-esque speed, he's swift enough and appears comfortable picking up the ball anywhere on the pitch.

Take your pick, he's only 20 years old. But when we look at his first start for Roma, a solid foundation does appear.

While it's not the most exciting video you'll ever see, Ricci was pretty composed on the ball, completing all 24 of his passes on the afternoon, while also drawing four fouls. However, his defensive contributions may have been the most impressive part of his first career start. Throughout his 58 minutes on the pitch, Ricci tracked back to provide defensive cover and was a perfect two-for-two in tackles; a pretty encouraging sign, one which speaks volumes about his understanding of the game in total, not to mention his level of effort.

Going forward, all we can hope is that Ricci adds some mass to his slender frame and learns the finer points of working the wing. While he's already a fairly versatile player, if he can learn to be as effective on the right as he appears to be on the left, steady playing time might not be that far off.

At only 20 years old, Ricci may have to wait three years or so before he becomes a Roma regular, but if he continues his progression, he might force his way into the lineup just as Gervinho's contract expires in 2017.

In our dream scenario, Ricci's left foot develops into a lethal weapon, providing the same type of southpaw spark as Rossi or Alessio Cerci. At the very least, his versatility and hustle should ensure a long professional career. 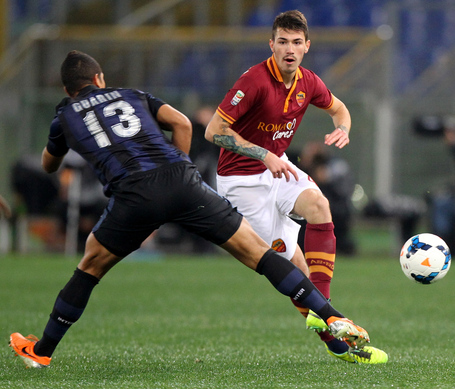 As you would expect, given his early call-up by Zdenek Zeman in 2012, Romagnoli's Primavera career was practically non-existent, and you'd be right--Roma's new number 11 made only 12 appearances on the kiddie farm. Presumably making his pin-up girl tattoo a graduation present to himself.

As we just mentioned, Romagnoli made his senior debut under Zeman at only 17-years-old, starting and playing the full 90 minutes against Atalanta on December 11, 2012.  Although he only made one further appearance in 2012-2013, it was a memorable one, as he scored his first career goal against Genoa in March of 2013.

Last season, pressed into service as an emergency leftback, Romagnoli made 13 appearances, including eight starts. And guess what? Thrust into the limelight and playing out of position, Romagnoli actually looked pretty legit, a topic we delved into last March. For now, Alessio is Roma's fourth choice centerback, whether or not he is loaned out remains to be seen.

Romagnoli has featured for Italy at the youth levels since he was 16 years old, most recently earning a U-21 call up.

Although at varying points in his brief career you could accuse Romagnoli of being a ball watcher, he's as promising a defensive prospect as Roma's produced in ages. Romagnoli has size, speed and mobility, he's proven (thus far) to be an accurate passer (88% last season), he's capable in the air and remarkably strong on the ball, as evidenced by his 69% tackling success rate last season. He is very much a centerback in the post-modern mold; big, strong and mobile.

As a reserve player, a role which he will presumably fill for several seasons still, his ability to play fullback will serve him well in his quest for first team minutes.

Obviously when discussing any young defender, particularly a center back, experience is the best teacher; Romagnoli needs to deepen his understanding of the game and improve his focus, both of which should cut down on his intermittent ball watching. Part and parcel of his inexperience is his disciplinary record. Romagnoli was carded four times in 11 appearances last season, which actually tied him for fourth on the squad despite his limited minutes. Obviously, if he wants to remain on the pitch week-to-week, he needs to be more judicious in his challenges.

Romagnoli has all the physical tools one craves in a centerback, so at this stage in his development, it's all about the mental side of the game. Can he improve his ability to read an attack as it unfolds? Can he close down passing lanes before opponents exploit them? Can he cut down on the cards?

If these crucial facets of his game continue to lag behind his physical tools, his potential will never be realized.

As I'm writing this, we're still faced with the prospect of Mehdi Benatia's long discussed exit coming true, with his latest suitor being Manchester United, so Romagnoli's role this season could change dramatically over the weekend. As it stands now, he's fourth in line behind Benatia, Leandro Castan and Davide Astori at centerback, and with Ashley Cole and Urby Emanuelson on board, he shouldn't be needed at fullback...we hope.

As it turns out, in the long run, Romagnoli's best case scenario may be an Astori-like career. They're a similar build and have a somewhat similar skillset, and Astori even suffered through his own disciplinary issues earlier in his career, so it's not too farfetched to envision his career following a similar trajectory.

We'll have numbers seven and eight in the coming days, but what do we think of Romagnoli and Ricci? Will these born and bred Romans make their mark for the Giallorossi?