On Pace For New Career Highs, Henrikh Mkhitaryan is Playing Better Than Ever

It’s still early in the 2020-21 campaign, but if Henrikh Mkhitaryan continues to produce at this rate, he could have the best statistical season of his career.

Share All sharing options for: On Pace For New Career Highs, Henrikh Mkhitaryan is Playing Better Than Ever

Over the past couple summers, Roma has gone bargain shopping in the Premier League. Now, the terms bargain and Premier League don’t generally go hand-in-hand. In fact, player values always seem to be a bit inflated when they’re put on the market in the self-proclaimed “Best League in the World”. However, the Giallorossi have certainly bucked the trend with the signings of Chris Smalling, Pedro, and Henrikh Mkhitaryan over the last 15 months or so.

Smalling has been impressive in his time in Rome, as has Pedro over a shorter time frame. Yet, as well as those two have played, Mkhitaryan is quickly becoming one of the best bang for the buck signings in recent memory. The now 31-year-old Armenian was thought to be on the decline after lackluster spells with both Manchester United and Arsenal. And the Gunners were more than willing to send him to Roma on loan last summer.

The move worked out well for Roma, as Mkhitaryan scored nine goals and dished out five assists over 22 Serie A matches. It was impressive work, but how much would Roma be willing to cough up for a 31-year-old whose fine form was frequently interrupted with spells on the trainer’s table?

Well, as it turns out, Roma were able to secure his services without paying a transfer fee. Naturally, free is usually considered a good thing, but free transfers don’t always work out for the club and player involved. In Mkhitaryan’s case, however, things couldn't be going any better for all parties involved—unless you include the opponents Mkhitaryan is terrorizing on a weekly basis.

As you probably already know, Mkhitaryan is off to an explosive start to the season, but just how good has he been?

Well, about as good as anyone in the league, including that Cristiano Ronaldo guy on Juventus. In fact, with about one-fifth of the season gone, Mkhitaryan is on the early shortlist for player of the year.

What Do the Numbers Say?

To begin with, Mkhitaryan’s five goals and four assists in eight league matches (700 minutes) immediately jump off the page and actually amounts to more than one goal or assist per 90 minutes; 1.16 in fact—that’s seventh best in the league. Meanwhile, his four assists lead the league while his five goals are tied for fifth-best.

Those standard stats are impressive, but when you begin to dig deeper into more advance metrics, Mkhitaryan really begins to shine. According to understat, the Armenian’s 5.90 expected goals are second best in the league, trailing only Zlatan Ibrahimovic’s 7.53xG. However, when penalty kicks are removed, Ibra’s number drops to 4.49NPxG, while Mkhitaryan’s remains 5.90NPxG. Meanwhile, Mkhitaryan also leads the league in expected assists with 3.97xA. Other than Mkhitaryan, only Mattia Zaccagni of Verona has an xA over 3.

Mkhitaryan has been equally impressive in xGChain90 stat; a stat that measures the xG of every possession the player is involved in per 90 minutes. Being a player who is heavily involved in Roma’s goal scoring and build-up, Mkhitaryan boasts an absurd xGChain of 1.60, trailing only Inter Milan's Alexis Sanchez (1.81)—though Sanchez has played significantly fewer minutes (275 vs 700).

How Does it Compare to His Career?

Unfortunately, not all of the more advanced statistics discussed above are available for his entire career, but we can still make some comparisons to provide some context for his performance this season, which is shaping up to be one of the best seasons of his career.

In his best statistical season (2012-2013 with Shakhtar Donetsk), he scored 25 goals, but if we look to his time in Europe's Top Five leagues, Mkhitaryan’s best season was 2015/16—his second with Borussia Dortmund. 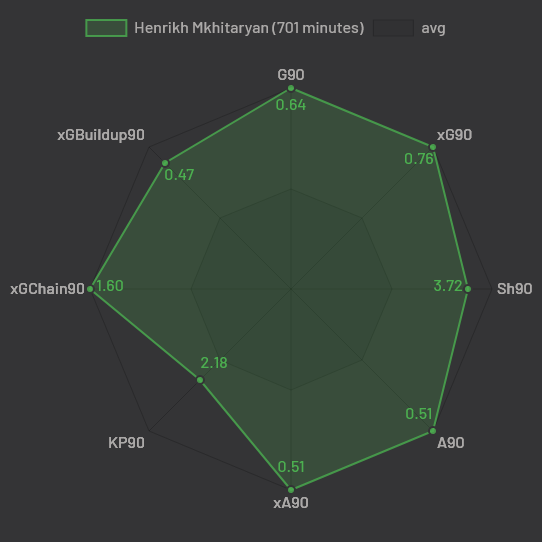 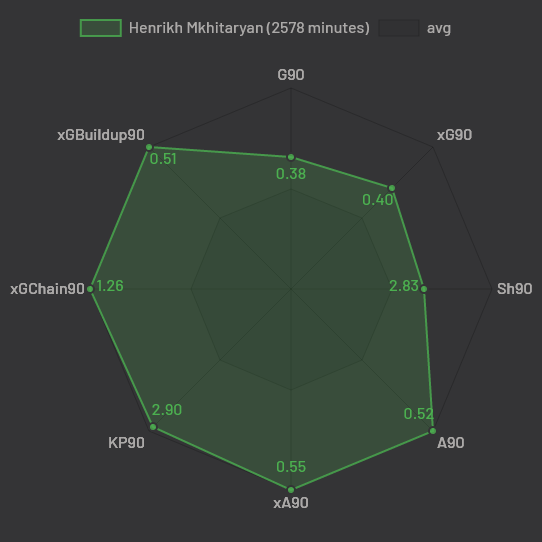 Mkhitaryan’s underlying stats compare well to his standout season for Borussia Dortmund in 2015/16. Swipe R for current year, L for 15/16.
understat.com and understat.com

What Does It All Mean?

The numbers don’t lie. At nearly 32 years of age, Mkhitaryan has been one of the most impactful offensive contributors on the Serie A season thus far. Of course, the eight matches and 700 minutes is only a fraction of what top players usually play in a season, so it will be interesting to see how long Mkhitaryan can sustain this type of production.

Mkhitaryan is on pace to play roughly 3,325 minutes. For a player that has never played more than 2,600 league minutes in any of Europe’s top leagues, that seems physically impossible for a near 32-year-old. However, if Mkhitaryan can push anywhere near the 2,578 minutes from that magical Dortmund season, then it’s not beyond the realm of possibility that he could push for double figures in both goals and assists for the second time in his career.

Of course, during that season the Armenian was only 26-years-old. At this point in his career it’ll be vital that Paulo Fonseca is cognizant of how hard he works Mkhitaryan. After last season’s injury issues, it’ll be important that Roma keeps its veteran danger man fit, which is why a Stephan El Shaarawy arrival seems imminent in January.

However, if Mkhitaryan can stay healthy and Fonseca manages his minutes properly, Mkhitaryan’s track record indicates that, even if his scorching hot start can’t be sustained over a full season, he is certainly capable of producing at a rate that would put him into contention for Serie A’s Best XI of the 2020-21 season.

Only time will tell how long this lasts, but for the time being let’s enjoy the magical performances that Mkhitaryan has been putting in and hope that he can continue to lead Roma to more wins.