My Roma Kit Collection: The Best, Worst, and More

I answer some key questions about how I’ve built up my collection, and discuss some shirts that are a part of it.

Share All sharing options for: My Roma Kit Collection: The Best, Worst, and More

Not too long ago, before SB Nation decided to run a network-wide celebration of jerseys and kits, I wrote a piece about my first Roma kit and how it kick-started my now fairly large collection. Of course, being a Romanista, this collection contains many Roma kits.

That initial piece answered one question posed by SB Nation—which jersey has a special place in your heart—but let's add context to the habit of collecting jerseys to begin with by asking a few more questions.

What makes us buy new jerseys over and over again?

One thing my wife can’t understand is why I need to buy new Roma kits pretty much each season. It drives her nuts. So, I’ll try my best to explain the obsession.

When I first started collecting, way back in 2007 with that first Totti kit, it would be my only authentic Roma shirt for some time. In the years that followed most of the Roma and non-Roma jerseys I bought were knock-offs from eBay (which took weeks to arrive from China). Since the cost was fairly low—usually about $30—it was easy to build up my collection (both Roma and non-Roma) without spending a fortune.

As I started buying authentic kits, I’ve slowed down and now generally only buy Roma and Italy kits. One thing that brings me back to buying new Roma kits over and over again is the fact that club shirts change every season and national team shirts change for each major tournament. Unlike North American sports jerseys, which rarely change, European club kits change noticeably each season, which keeps me buying each and every season.

For example, this year’s masterpiece of a Roma third kit won’t come around again. They may again have a navy third jersey, but never will it have the subtleties of the 19/20 incarnation. In contrast, one of my favorite North American franchises, the New York Yankees, never varies from its iconic pinstriped jersey. Whereas it can be purchased any season, a memorable Roma kit might never possibly be found for sale again, which is why I regret not pulling the trigger on the SPQR derby kit a few seasons ago.

Another thing that can factor in buying a new jersey is a new favorite player in the squad—something I’ll get into a bit more later. I don’t really collect jerseys of other sports the way I do calcio, but one thing that does entice me into buying a new Philadelphia Eagles jersey every now and again is a player on the team I may like. However, in terms of Roma kits, this is more of a secondary consideration since soccer kits can be bought and look great without a player’s name and number.

Dos and Don'ts of Selecting a Name for the Back

One of the big decisions when buying a new kit, especially an authentic one, is making the decision between customizing it with a player’s name and number or leaving it blank. When I purchased that first Totti kit, it was a no-brainer. Totti was the reason I had become a Roma fan and he's a club legend. When I walked into the sporting goods store in Florence, I knew exactly what I wanted. I was even willing to wait the two weeks—the next time my study abroad group would make the hour trek to Florence from Siena—to pick up the finished product.

Early on, as I built up my collection with mostly cheap eBay knock-offs, I always put a name on the shirt. There were a few reasons for this. First off, I wanted to build up my repertoire of my favorite players that I could represent. Through the late 2000s and early 2010s, I added players like De Rossi, Aquilani, Marco Motta, and Osvaldo to the ranks. This was easy considering customization usually was included in the fairly low price.

I also think I was influenced early on by the American mentality where sports jerseys are rarely sold blank, especially in football and basketball. Just because of the way those jerseys are laid out, a blank NFL jersey is very plain and unattractive.

As I began to collect more authentic kits, I still sometimes customize them, but I am a bit more selective about who I choose. I tend to focus my customization choices along a couple of criteria. First, I try to choose a player that has staying power with the club. For this reason, I have a couple each of Totti and De Rossi, and once he was established in the team I went with a Florenzi, and last season bought a Pellegrini.

I also tend to buy authentic kits with Italian players, so if they do end up leaving the club on good terms, I can still feel fine wearing the name of someone on the national team. That didn’t pan out particularly well with my Mattia Destro and Pablo Osvaldo authentic shirts, since both of their national team careers flamed out after Roma. However, I don’t regret either purchase, as I hold no ill-will toward either player, though I didn’t follow the my own longevity rule very well.

The national team rule also applied to the purchase of my Michael Bradley kit. Being Italian-American it’s rare to have an American player in Serie A, let alone playing for Roma, so, I went with Bradley. I only broke Italy/US National Team rule twice, once with the knock-off Mexes and once with another kit which I’ll regrettably discuss later.

However, as time has gone on, I’ve begun to become more selective when choosing between customizing or leaving a jersey blank. This season I purchased the navy third kit and left it blank. I wanted to get Zaniolo on the back, but the local soccer shop I bought it from was unable to get authentic lettering from their supplier. So, instead of potentially ruining a beautiful kit with replica lettering, I decided to leave it blank. That’s something I find myself doing more often in recent seasons—more on that in a second.

Another factor weighing into the decision of customization of authentic kits is the price. Customization comes with added cost. Authentic jerseys already cost about $90—a price I try to avoid with end of year sales or using gift cards—and then customization usually runs another $30. So, if I’m going drop the same amount of money on lettering that I used to spend on an entire knock-off jersey, it better be on a player who’s worth it. Hence why more than half of my authentic jerseys with a name and number are Roman players. Zaniolo will likely be next, but it also brings me to the next question.

What jersey do you regret buying?

I don’t even have to think about this one. It is hands down my 2015-2016 third jersey. And not because I dislike the silver kit with the black sleeves that fade into the silver. On the contrary, it’s actually probably one of my favorite Roma third kits.

The reason I regret the purchase so much is because of the name on the back: Pjanic. Pjanic checked the box on my first rule about player longevity when I bought the kit. He was in his fifth season with the club. It seemed like a safe bet. And even though he doesn’t play for the Italian or US national teams, I likely would’ve had no problem with the shirt had he left for any other club in the summer of 2016. After all, he did give five good years to the club.

However, once he left for Juve and became a Judas, this kit instantly became my biggest regret. It’s a shame because it’s a good looking shirt, but now I rarely take it out of the closet.

What’s your favorite jersey you own?

This is a tough question since I have quite a few that I like. My first Totti kit is up there since it has sentimental value. So, with that in mind it’ll always have a special place in my heart, but in terms of looks it’s not my favorite.

I’m also very fond of this year’s third shirt, but at this point it lacks any nostalgic value. So, if I had to choose it would probably come down to two kits that I bought during the 2015-2016 season. And I’m certainly not referring to the Pjanic one.

Back in ‘15-’16 I ended up splurging and ordering all three kits. Fun fact, it’s probably my favorite kit trio of any season since I’ve been a fan. On the home kit that season I went with De Rossi and on the away I went Totti. We’ll call the answer to this question a toss up between the two. 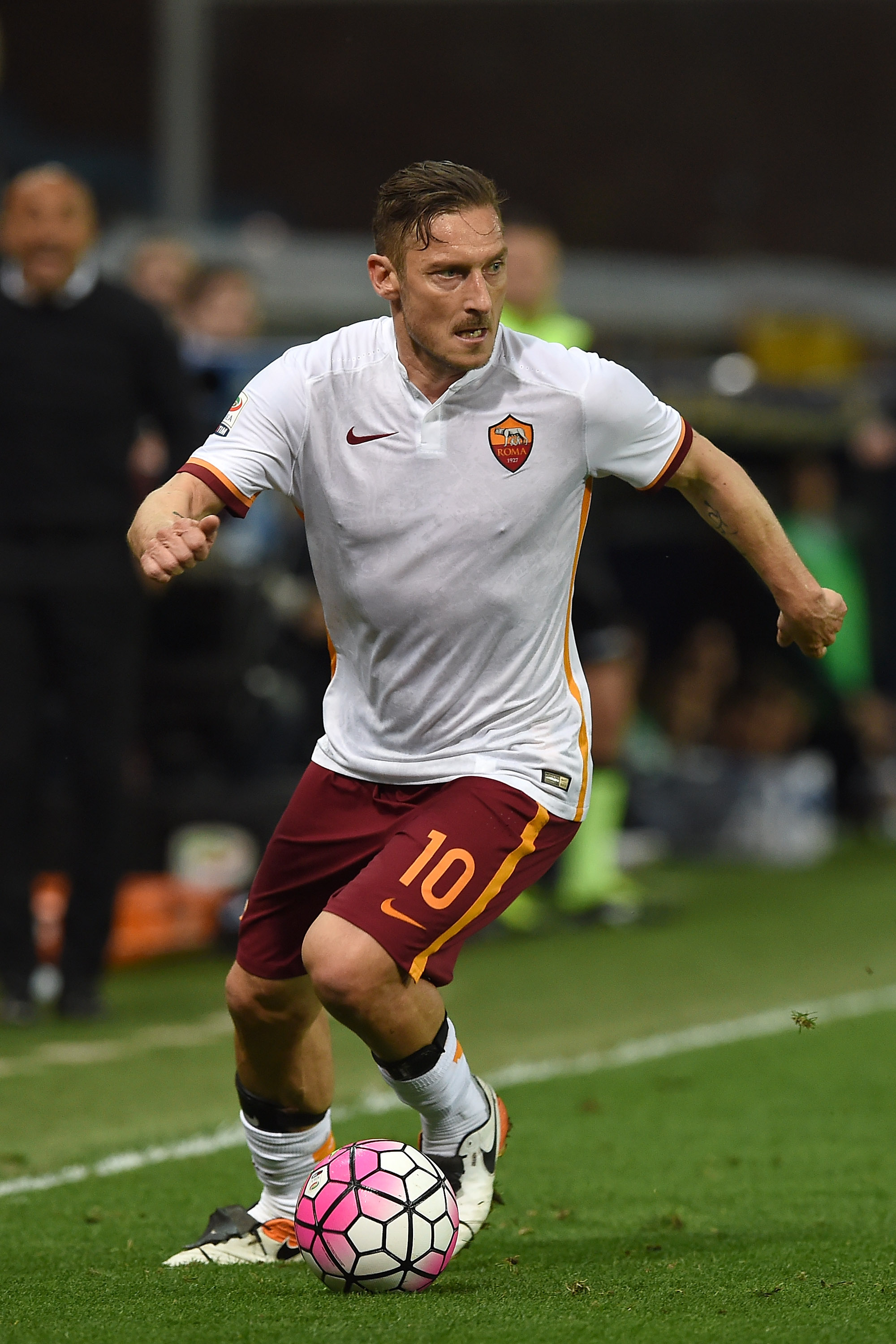 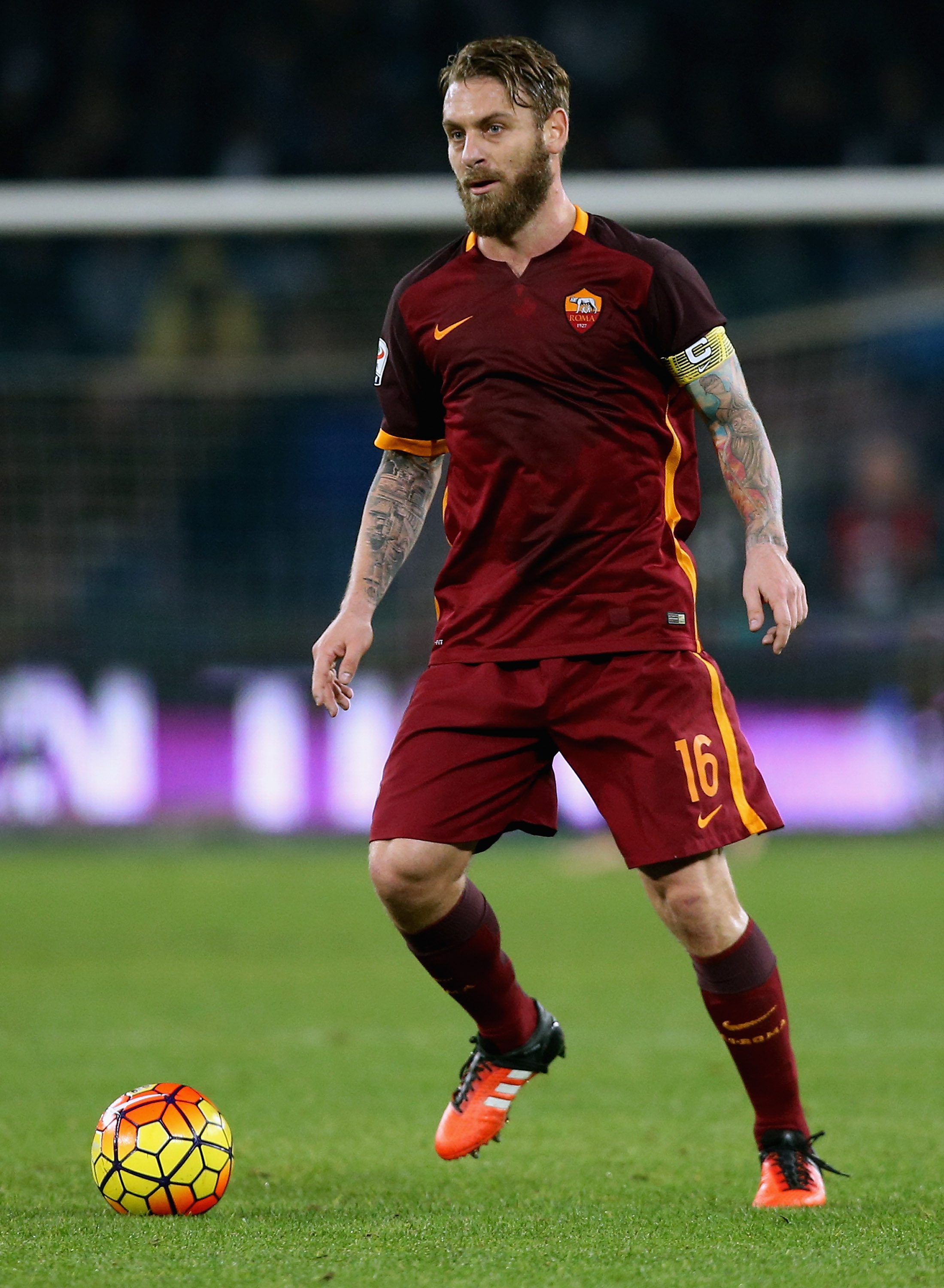 It’s a toss up between these two beauts when choosing my favorite Roma kit.
Photo by Valerio Pennicino/Getty Images and Photo by Maurizio Lagana/Getty Images

On the home kit, I really like the darker red sleeved and shoulders along with the yellow stripes going down the sides, ringing the sleeves and the collar. The subtle “v” in the front of the collar also makes it very comfortable. Meanwhile, the lettering for these kits was some of the nicest I’ve seen with the watermarks of a map of Rome in the yellow numbers.

The away kit took those watermarks a step further by not only including them in the red numbers, but the entire front of the shirt. The pair of giallo and rosso stripes around the sleeves was a nice touch, as was the button collar. The best part of these two kits is also the fact that they’re unadulterated by a sponsor on the front. That lack of sponsor makes the away watermarks the focal point of that particular shirt.

The combination of the look of these jerseys with the fact they were the last Totti and De Rossi shirts I bought, make them my joint favorite.

Now that I’ve told you about how I decide on which shirts to buy, as well as my favorite and most regrettable kits in my collection, we’d love to hear more about the shirts you own: Why did you buy them? Do you have your own purchasing rules?