Roma’s captain compares well with the league’s top strikers in some areas, but must improve in others to help Roma push for a Champions League spot when play resumes.

Roma bringing in Edin Dzeko from Manchester City for the bargain price of €15 million has to be one of Roma’s best pieces of transfer work during the American era. In his time with the Giallorossi, Dzeko has accumulated 102 goals and 45 assists in 211 total appearances in all competitions. That’s quite the bang for the buck.

We all know just how close Dzeko was to leaving for Inter last summer, before deciding that his heart was in the Italian capital. And, on an ever younger squad, Dzeko has taken on an important leadership role—even taking over the captaincy when Alessandro Florenzi was sent packing. So, Dzeko’s contributions go beyond the numbers.

Yet, despite all Dzeko has done and his continued important role on the squad, the Bosnian Bomber isn’t getting any younger. We’ve discussed plenty of times here the need for Roma to find a suitable back-up and eventual heir—something Roma has struggled to do in recent summers. Hence, the constant cycle of recent rumors connecting Roma to Moise Kean and Nahuel Bustos.

Nevertheless, no matter what may eventually transpire on the mercato—in terms of a viable reserve and eventual replacement—the fact remains that Dzeko continues to be one of Roma’s key men. And while his dozen league goals so far this year may not blow you away, Dzeko has actually performed well in many areas that don’t always show up on the scoresheet. With that in mind, we will explore where Dzeko excels for Roma and where he must improve as the Giallorossi look to make a summer assault on Serie A’s last Champions League place and lift the Europa League trophy.

Before the league was halted in March, Dzeko was having a fairly solid season. His 12 league goals in 2,123 minutes—good for 0.51 goals per 90 minutes—is his best scoring rate in a Roma shirt besides his capocannoniere campaign of 2016/17. When factoring in his four assists, it’s also his second best campaign in terms of goals plus assists per 90 minutes (0.68). So, while Dzeko will likely never again come close to his 29 goals and 9 assists from that magical season under Luciano Spalletti, he’s had a nice bounce-back campaign after scoring only 9 league goals last season.

Dzeko may be far from the top of the Serie A scoring chart this season (he's currently 8th), trailing the likes of Ciro Immobile, Cristiano Ronaldo and Romelu Lukaku, but he stacks up very well with the top three in a way that isn’t directly reflected in the top scorer rankings.

When watching Roma play, it becomes very clear that Dzeko’s game is about a lot more than goal scoring. He’s often pivotal in Roma’s build-up and his hold-up play is second to none. He’s also fairly skilled on the ball for a classic #9. When considering this, Dzeko stacks up very well with all three when looking at the advanced metrics.

As can be seen in the gallery above, Dzeko outpaces all three players in XGChain90. xGC90 is defined by American Soccer Analysis as:

“For those who are not familiar with Expected Goal Chains (xGC), the metric looks at all passing sequences that lead to a shot and credits each player involved with the xG. Instead of just looking at expected goals and expected assists, which primarily benefits strikers and attacking midfielders, xG Chains is beneficial to every player involved in a sequence….”

So, as evidenced by this xGC90 advanced metric, Dzeko is more heavily involved in passing chains that directly lead to a shot for his team, even ahead of Ronaldo. This discrepancy, especially when comparing Dzeko to more classic strikers like Immobile and Lukaku, shows the value of the Bosnian in Roma’s build up play.

Further evidence to Dzeko’s importance in Roma’s passing chains is the fact that he also leads all of Roma’s regular contributors in this category. Dzeko’s 0.92 xGC90 is only rivaled by Henrikh Mkitaryan’s 0.90 xGC90. Following them are Cengiz Ünder (0.83) and Lorenzo Pellegrini (0.75).

Another area where Dzeko stacks up well with the aforementioned trio of Immobile, Ronaldo, and Lukaku is xGBuildup90. This stat is similar to xGChain90, except that it removes a player’s shots and key passes as explained below by American Soccer Analysis.

xBuildup is designed to reward players who are integral parts of their team’s buildup play, but who don’t often get recognized with xGoals (xG) or xAssists (xA). To calculate this metric for a given player, we identify all the possession chains in which that player made a successful pass or dribble, or earned a foul, but didn’t take a shot or complete a key pass (i.e. a pass that led directly to a shot attempt).

This stat is meant to bring to light the value of players who aren’t always involved in the action in the final third. For example, Bryan Cristante leads regular Roma starters in xGBuildup90 (0.63), which is only a 0.7 drop-off from his xGChain90 of 0.70. However, players that are heavily involved in the final third see a bigger drop-off when removing their shots and key passes. For example, Dzeko drops from his team high 0.92 xGChain90 to 0.22 xGBuildup90 and Pellegrini from 0.76 xGChain to 0.39 xGBuildup90.

However, even with this stark decline between the stats, for a striker Dzeko still rates highly. He is nearly on par with the much more creative Ronaldo (0.23). Meanwhile, he doubles Immobile’s 0.11 xGBuildup90 and is 64% higher than Lukaku’s 0.14. This is further evidence to just how important Dzeko is when Roma builds into attack, even when he’s not directly involved in the end product.

Unfortunately, all of Dzeko’s numbers don’t stack up quite so well with the league’s top strikers. Despite all of the positive contributions that Dzeko has provided in terms of buildup play, he is lacking in other areas in comparison the league leaders. After all, there is a reason why he currently sits eighth on the leading scorer list. One of the reasons for this is the rate that Dzeko puts shots on target.

Dzeko is currently second in the league in total shots (93), but the rate at which he puts them on target is lacking in comparison with the other top strikers in the league—only João Pedro and Ronaldo puts shot on target at a lower rate than Dzeko.

This rather pedestrian shooting percentage (40.9%) has directly affected Dzeko’s goal scoring. The advanced metrics paint the picture of a player that should have far more than the dozen goals he’s scored. In fact, Dzeko has the third highest expected goals in the league this season (17.13xG) behind only Immobile (20.22xG) and Ronaldo (17.35xG). Meanwhile, the fourth best player in xG is Lukaku at only 13.69xG.

So, in theory, Dzeko should be the league’s third leading scorer with 17 goals, pretty much on pace with Ronaldo and within striking distance of Immobile. Nevertheless, theories don’t always equate to reality. And Dzeko’s shooting percentage has a lot to do with that.

This is issue becomes glaringly obvious when comparing the xG of the league’s top scorers to what they’ve actually produced. Dzeko is under-performing by more than 5 goals, according to his xG. Meanwhile, league leading scorer Immobile is over-performing by nearly 7 goals. Everyone else above Dzeko on the scoring chart is also scoring at a higher rate than their xG by at least two goals.

Making matters even more troublesome—when compared to many of the other top scorers in the league—is Dzeko’s scoring rate from the run of play. Unlike players like Immobile and Ronaldo, who take their teams’ penalty kicks, Dzeko doesn’t take Roma’s. So, when removing penalty kicks from the equation, Dzeko’s NPxG (non-penalty xG) is by far the highest in the league. This means he’s doing a lot right in terms of getting himself in position to score, but just isn’t finishing his chances at a high enough rate.

Again, the reason for this is down to Dzeko’s finishing, especially from the penalty spot and closer to goal. As evidenced by the graphic below, Dzeko has numerous shots that were either missed completely (red) or blocked (purple) from fairly close in. The larger the circle, the higher the xG on a particular shot.

When comparing this to a player like Immobile (slide over the graphics below), who is far outperforming his xG, there is a clear difference. Immobile has no missed shots in and around the six yard box. This probably has to be the biggest knock on Dzeko and the most telling reason why he’s got only 12 goals this season. 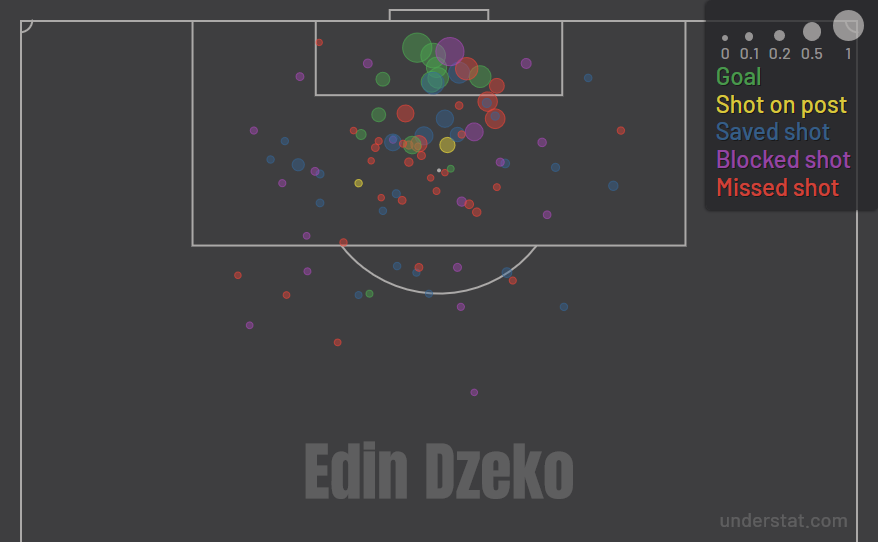 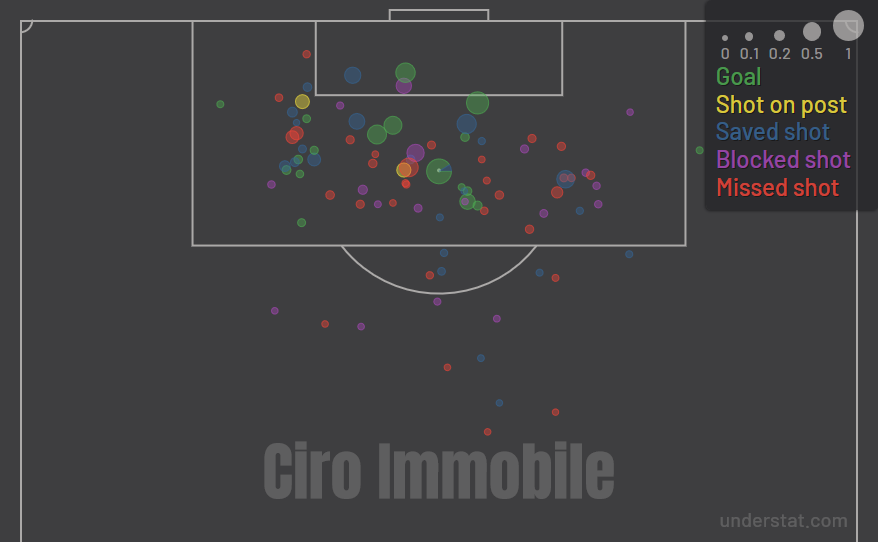 Overall, Dzeko has had a solid season when taking into consideration his 12 goals and 4 assists. The fact that he’s having his second best season statistically in a Roma shirt at age 34 speaks to Fonseca’s tactics and Dzeko’s commitment. Additionally, he continues to be an invaluable member of the squad in many facets of the game, which is supported by his underlying stats like xGChain90 and xGBuildup90.

However, for the all the positives that Dzeko has contributed both in goal-scoring and buildup play, in some ways he is still under-performing. For all of the good that Dzeko has done in creating chances for Roma, he’s not scoring at the rate he should be. With 5 fewer goals than his xG, Dzeko is under-performing despite his dozen league goals.

In order to improve on this ratio, Dzeko will have to begin to put more of his shots on target than his current 53% rate. Roma can’t afford to have Dzeko missing shots from close in as it tries to overtake Atalanta in the race for fourth. Roma has dropped too many points this season in matches where it’s xG is higher than its opponent’s. Dzeko will have to improve his finishing rate to help the Giallorossi avoid this happening when play resumes, as the Lupi can ill-afford to drop any more points.