Share All sharing options for: Sinners & Saints: SPAL vs. Roma

Picture your team taking to a pitch for 90+ minutes, and not knowing whether your enemy is going to carve you open with through-balls, keep you off balance by racking off a few shots from distance, come at you from the flanks, or come at you through the middle.

Then, just when you figure they’re taking a breather for a few minutes, their youngest player decides it’s the right moment to take out 5 of your men and rifle one into the top corner, all on his lonesome.

You know... Just because he can.

SPAL didn’t have an enjoyable Wednesday evening. Roma did.

Thank you, Paulo Fonseca. The last two Roma games have been some of the most beautiful football I’ve seen in the capital since I first became a Roma fan. And if you think I’m exaggerating, that’s fair. But let’s just rifle off the numbers.

Roma had a metronomic balance of attacks perfectly spread out between the left flank (30%), the right flank (34%) and saving the plurality of their attacks for the middle (37%). Eusebio Di Francesco once spoke of his ideal rule-of-thumb: “One attack through the middle for every two attacks out wide.”

Paulo Fonseca has not only inverted that ratio but made his own ethos a practical reality.

Still not satisfied? Roma took a total 18 shots on goal (though Lega Serie A reckons it was 13 attempts), 9 of those on target and six of them scored. If you go by the league’s official stats, that’s a killer conversation rate of nearly 50%.

So that begs the question: were SPAL really just that wide open or were Roma really that deadly?

Roma’s goals ranged from outright sniper-shots (Carles Perez: xG 0.04, Aleksandar Kolarov: xG 0.01) to the opportunistic (Nikola Kalinic: xG 0.60), all the way to well-worked team goals (Bruno Peres; xG 0.25 and xG 0.11). Then there was something Nicolo Zaniolo did that escapes my memory right now, but it ranked as an xG 0.19 opportunity.

Must have been a decent goal, that one.

I’ll be the first to admit that these are abnormal circumstances to judge a team’s performance, through back-to-back-to-back mid-July games in empty stadia. But when is the last time you saw Roma transplant this kind of football against opponents at both ends of the league table?

Fonseca’s collective football means that Carles Perez and Bruno Peres can count themselves among 17 different Roma league scorers this season, while this side becomes the first since 1935 to put six goals past a league opponent and now holds the outright record for most away goals scored by a Roma side in a leage campaign, though the 2000/01 Roma side’s 33 away goals scored was done in an 18-team league format.

This is the second chapter of a brand of football that begin to click against Inter Milan and has now continued against the bottom-placed team in the league. Which, as any seasoned Lupi fan will tell you, isn’t typical of Roma at all.

The Italian papers write, this morning, of Roma being led to victory by Bruno Peres. Not just that Peres was a part of a Roma win, not that he put in a nice shift, by that he led to the team to victory. Who would begrudge Peres such an accolade?

Don’t get us wrong, Peres wasn’t faultless last night and one particularly complacent moment where he needlessly put Pau Lopez under pressure with a backpass sticks out. But the Brazilian has already discovered the kind of close-control on the ball against Inter that we’d never previously seen in his entire career, and Peres continued to show the full array of skills against SPAL.

Asked to play both from wide right and wide left last night, Bruno replied with two goals and a heart-celebration to the cameras who’s recipient he’s refusing to reveal right now.

“I still can’t say [who that was for],” Peres said after the game, “but they’re important.”

One of my favourite Fekky lyrics - ‘I ain’t a role model, but I’m in the new model with a new model’ - comes to mind.

Young Mancio has been overshadowed, recently, by the arrival of the total package footballer in Ibañez. So this was exactly the kind of performance the Italian needed under his belt.

While Diawara and Cristante dominated the passing network for this game, the key third-man to that domination was Mancini. He was pushing up high, making all but 6 of his 42 passes into the middle or final third of the pitch, while 29 of them were forward passes. You can even catch moments in the match highlights where Mancini comes under pressure on the ball, and yet always comes up with an answer to release a teammate into space.

Make no mistake about it: Mancini is a baller; the kind you want on your team if you want to stay on the front foot. And of course, he was more than backed up by Chris Smalling’s laser-guided anticipation of where danger could break behind him, watching out for Mancini’s six.

Smalling twiced clear the ball off the line in this game, even if his first goal-saving clearance eventually saw SPAL ruled offside. Smalling also managed to pick up an assist for Roma’s last goal on the night. Ha.

The new-age Crockett and Tubbs duo of Mancini and Smalling never left. It just has to mould itself around the phenom Ibañez, in time.

Perez was fundamental to Roma not letting doubts creep into their game at 1-1, and getting back ahead in the match. He has the close-control in tight spaces that Roma are look for in that final third, and both an educated and potent left-foot—be it from open play or even from set pieces.

Perez racked up a key pass from taking a corner, as well as the kind of through-ball in the final third that we’re now aware he can craft on the weekly. To top it off, he’s tenacious when it comes to closing down and winning the ball back, too.

It’s no mystery why Barcelona fans (and the coach) are still upset at Roma shoplifting Perez this past January.

You can easily get stuck on 0-0 for too long in games like this one so, when Kalinic showed the kind of alertness to pounce for the opening goal against SPAL, that’s a blessing. Even if that was the only kind of fox-in-the-box action we were going to get from Kalinic on the night.

The rest of the Croatian’s game has morphed into the same role Dzeko is playing for the team. Basically, everything done to put teammates through on goal while even finding time to clear the danger when defending corners in your own penalty box.

On Instagram this week, Zaniolo’s only response to the furore created by Rome’s press was that the strong move in silence. In keeping with that spirit: 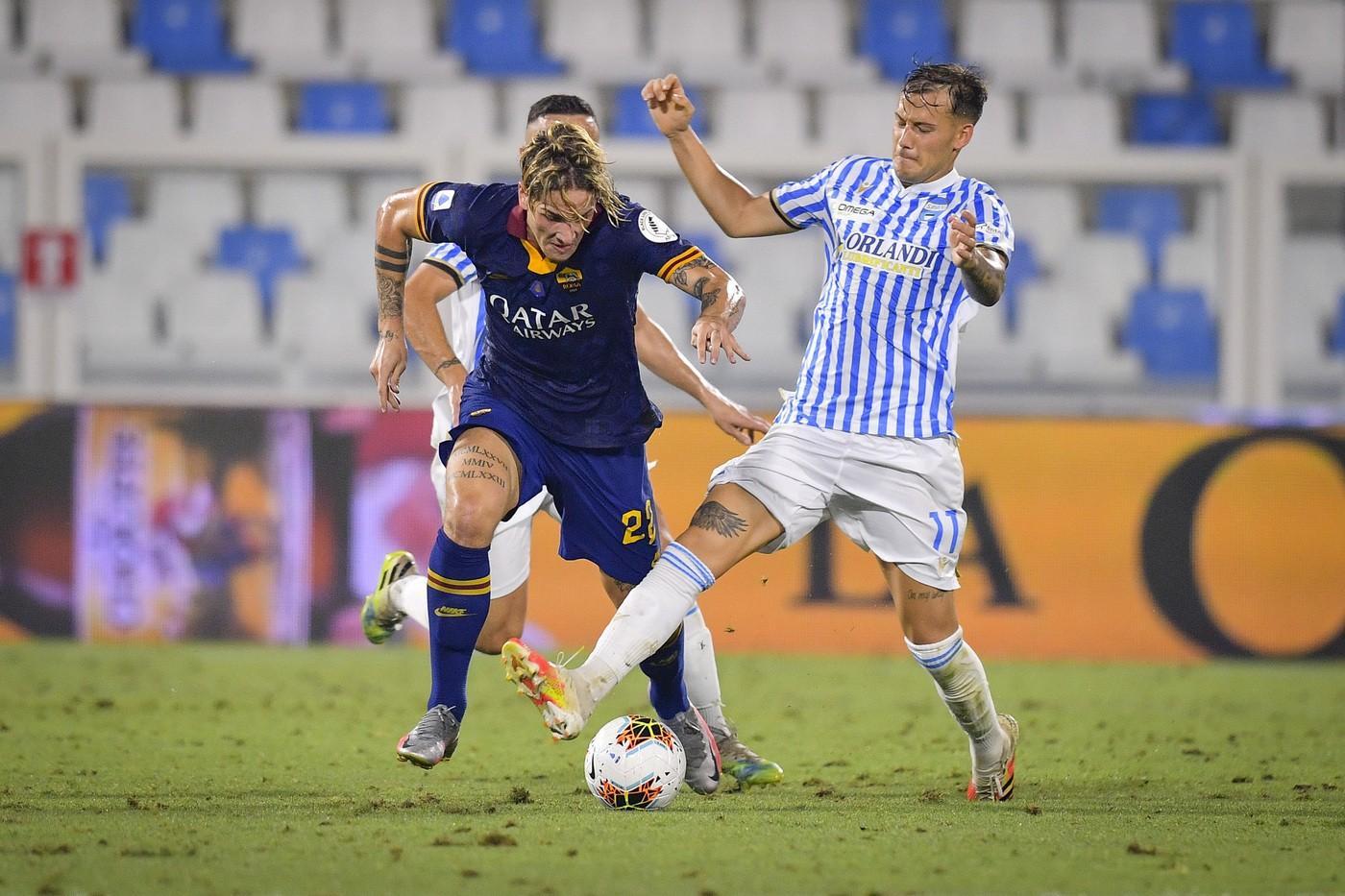 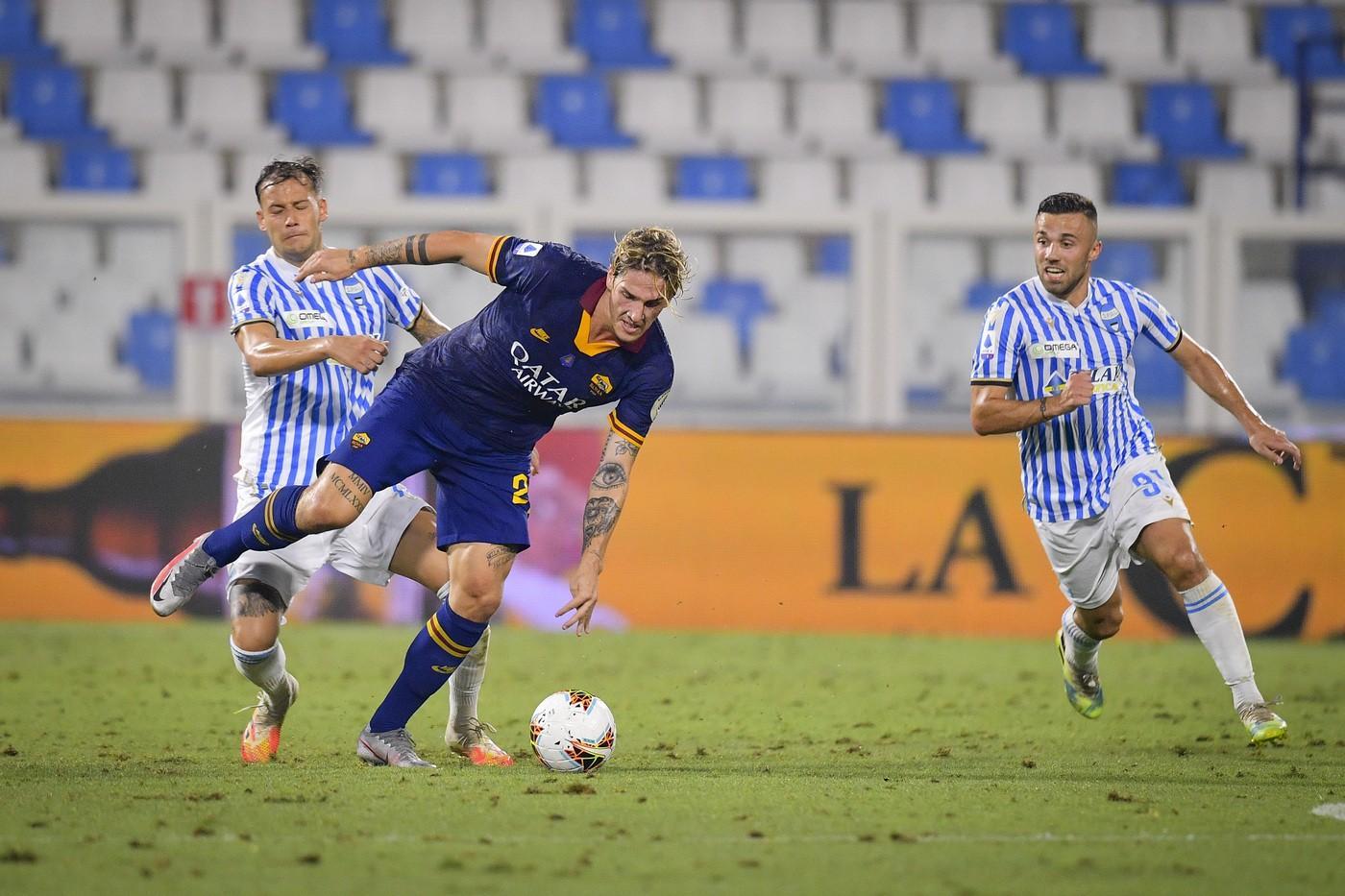 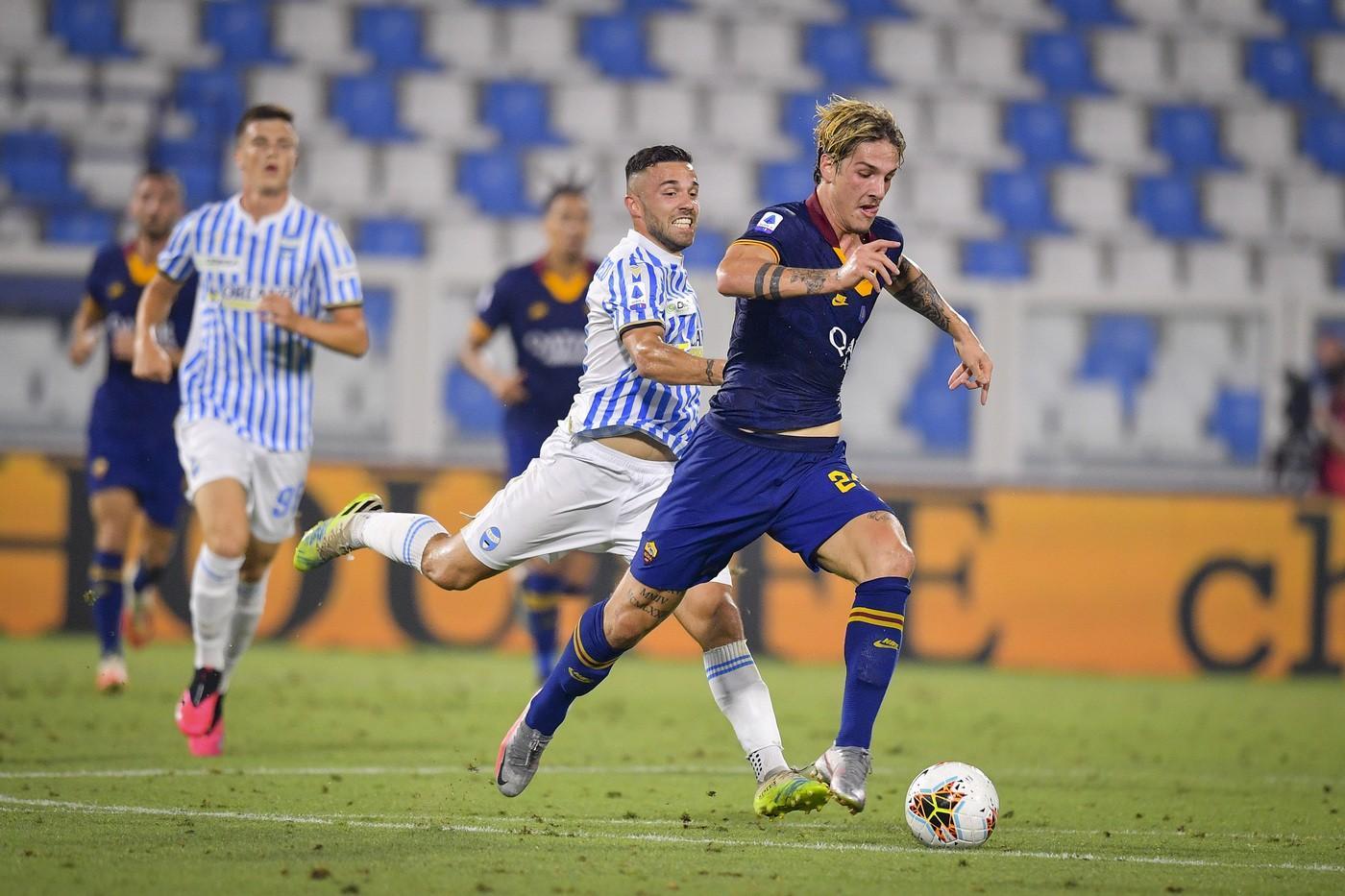 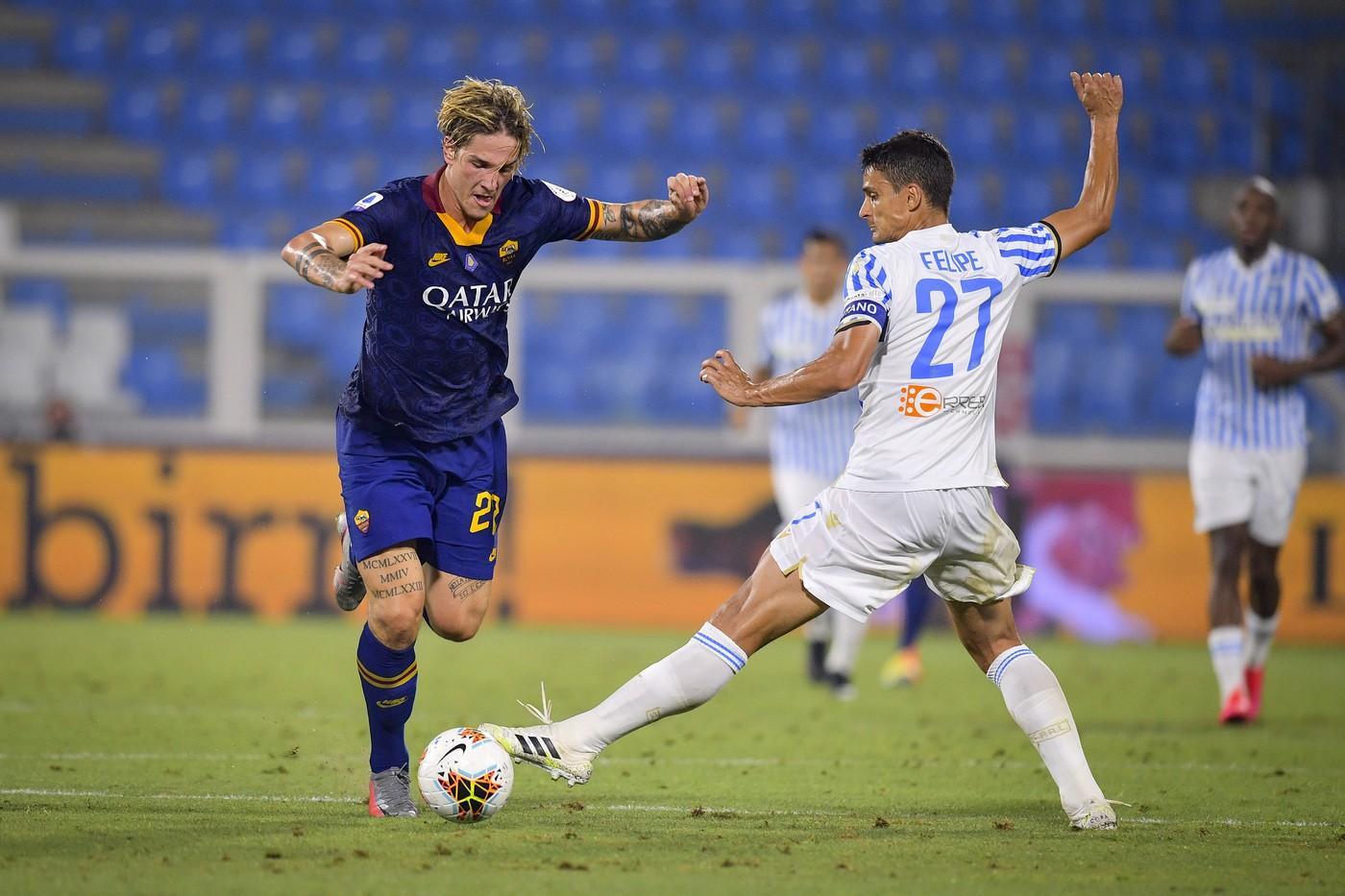 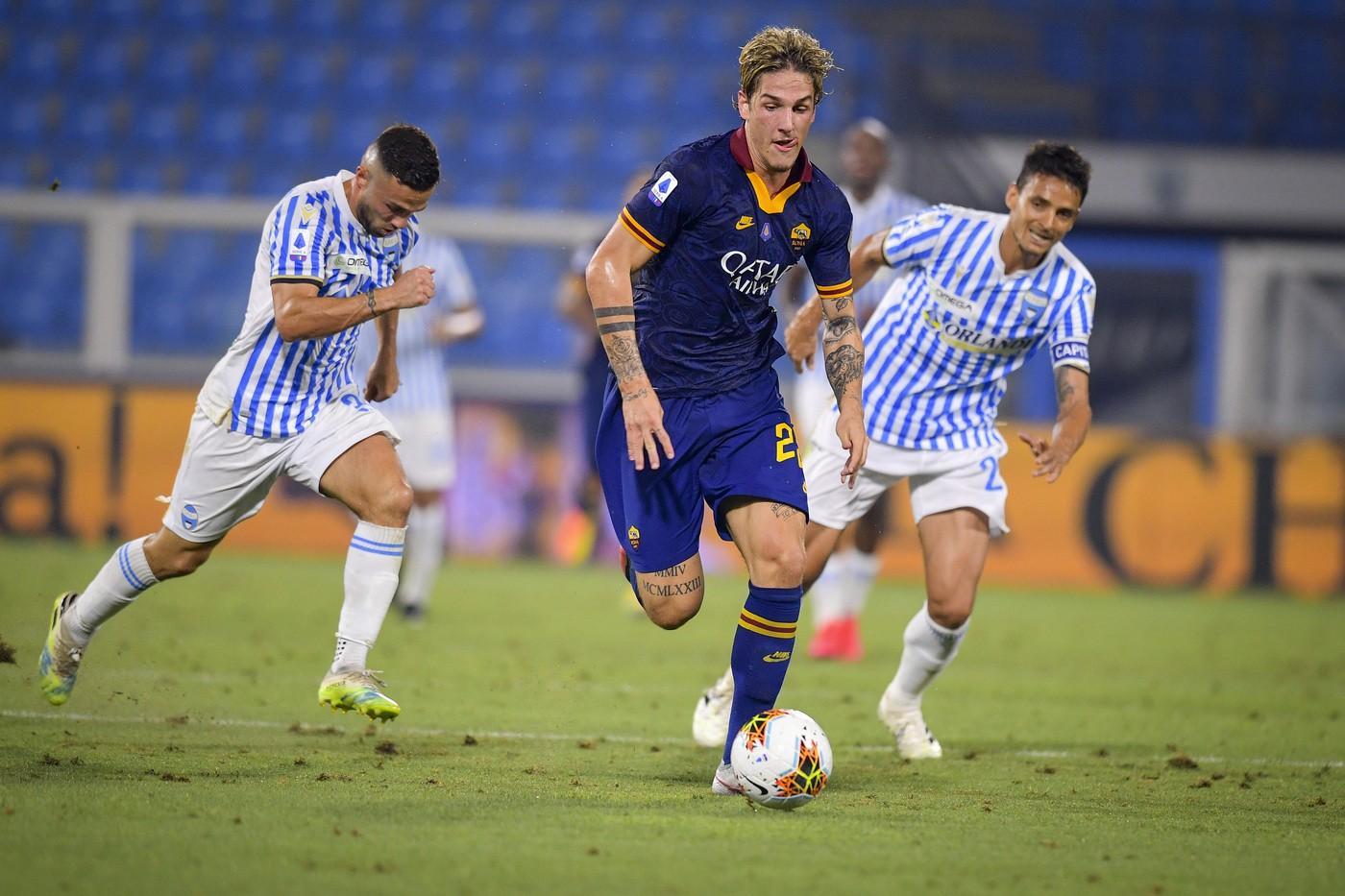 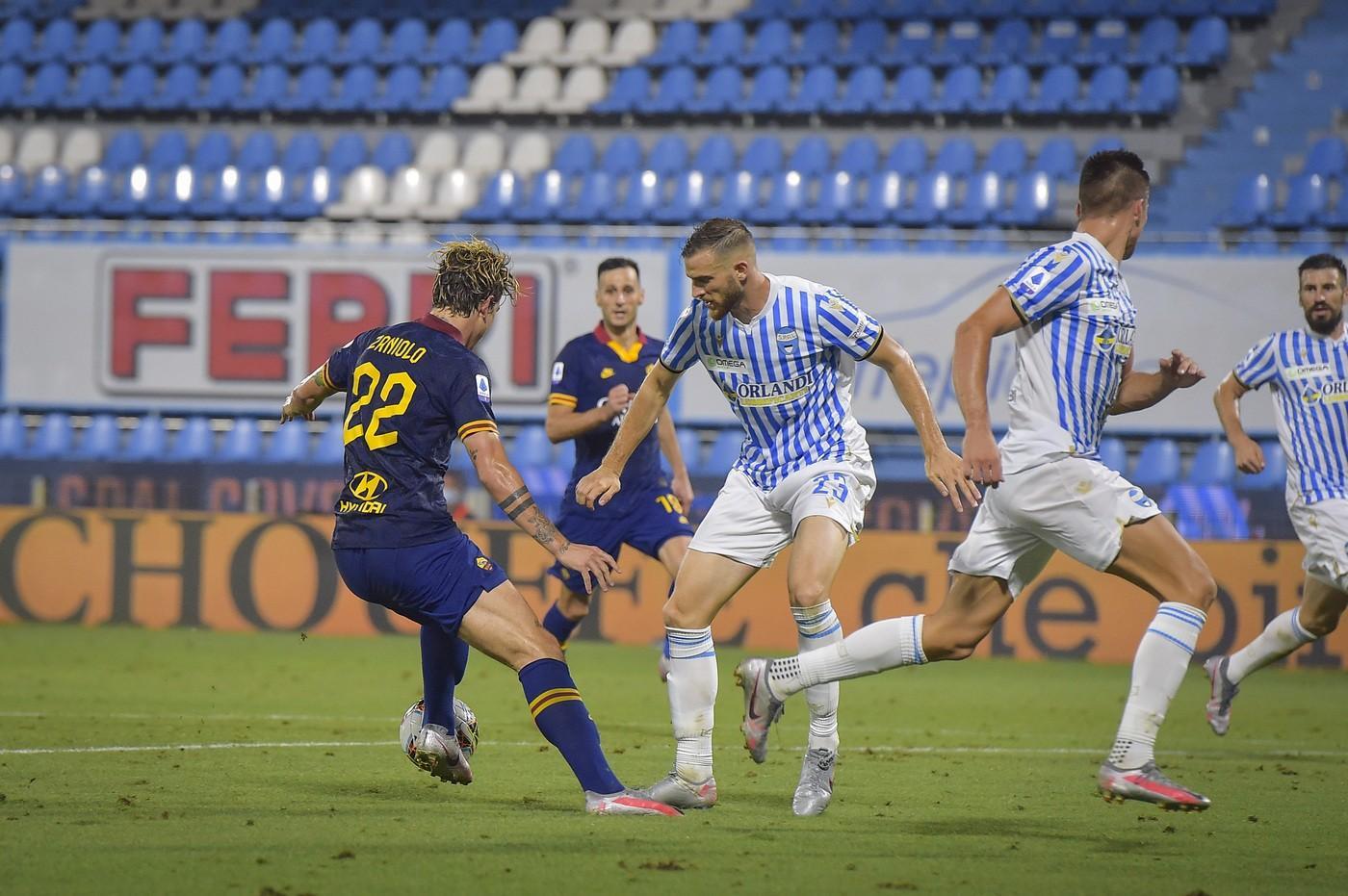 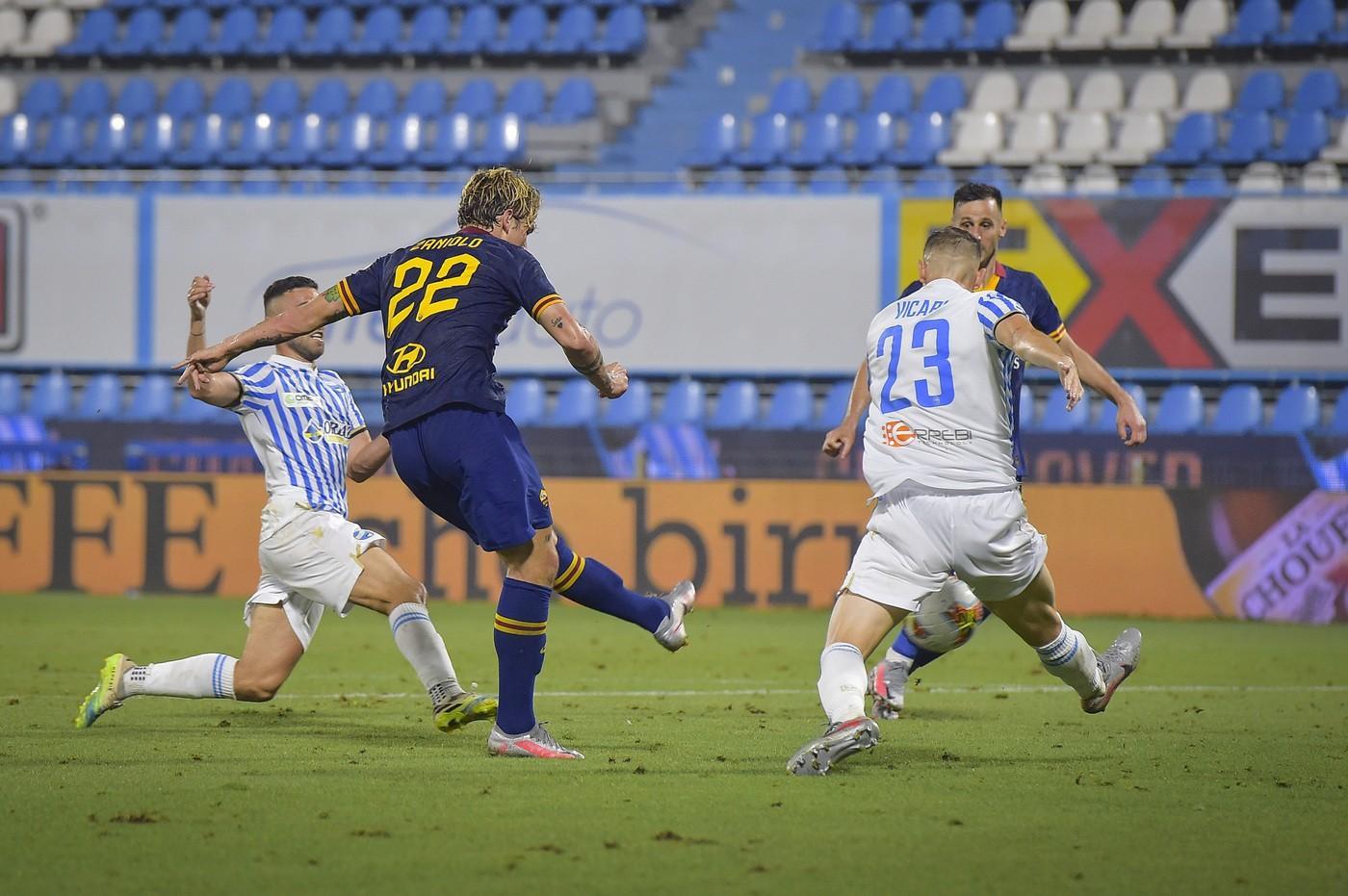 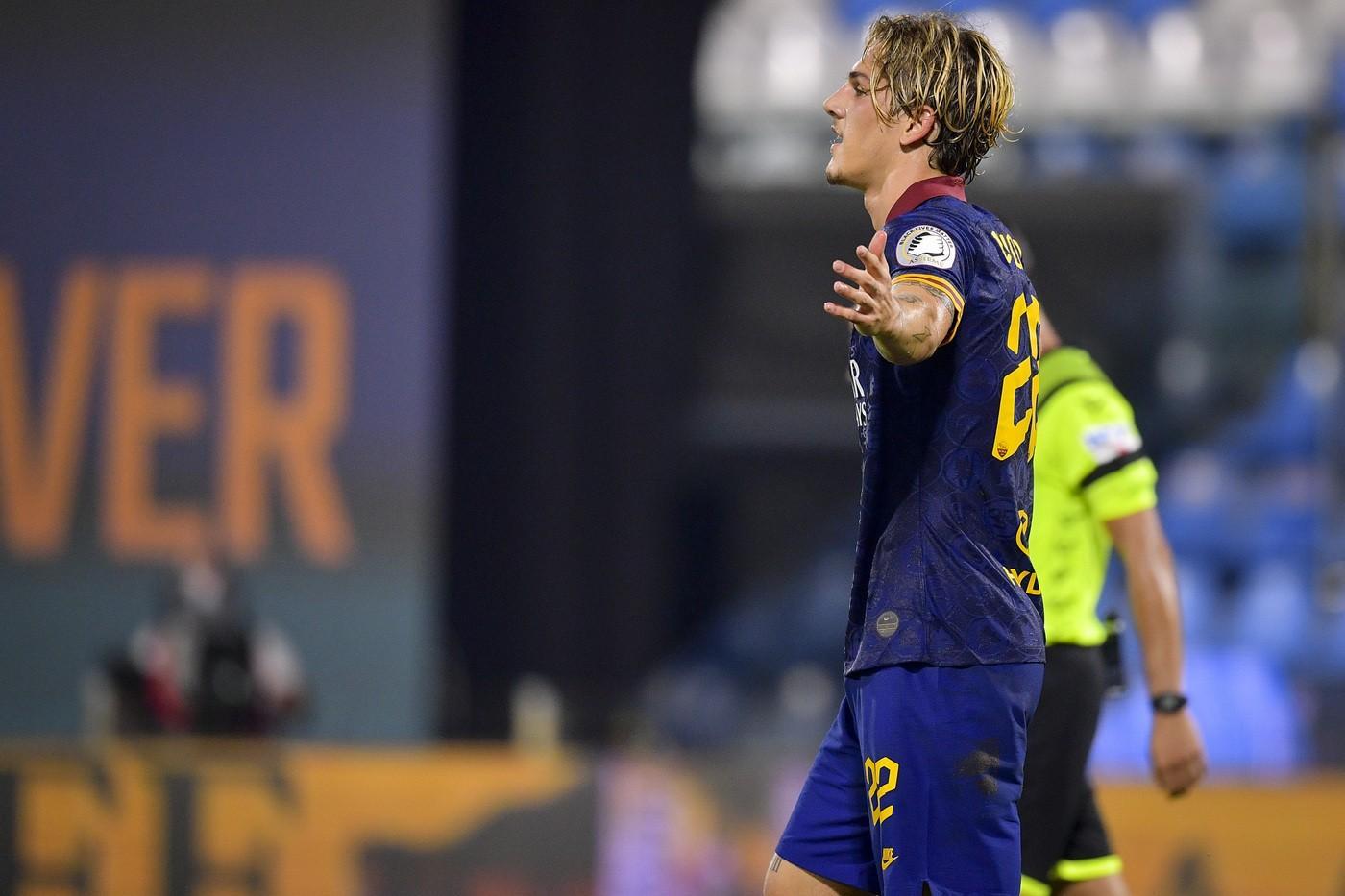 Napoli may have faltered yesterday, but AC Milan are still hot on Roma’s heels in the battle for to escape the Europa League qualifying rounds. Next up for Paulo Fonseca’s team is another must-win game at home against a Castrovilli-less Fiorentina, this coming Sunday evening.