Much discussion has been had about the quality of Paulo Fonseca’s work since he arrived at Roma in the summer of 2019. Many have doubts about his ability to put Roma in one of the four CL spots for next season and about his suitability to be the man at the helm of the current Friedkin project in the long term. Particularly, losses against direct rivals have earned him a considerable amount of criticism. Despite this, the giallorossi are very much still in the battle for a CL spot. You could argue that it doesn’t matter much against whom you earn points, what matters is how many of them you earn. Which one is it then? Has Fonseca been great, fine, meh, or outright bad? That is the question I will try to answer here as objectively as possible.

Fairly judging how a coach is doing in any given season is not easy matter. For one thing, we can judge him by what actually matters in the end: league position. Many fans only really care about that, and for them anything else is just noise or excuses. Fair enough. Things are, however, much more nuanced in reality. For example, getting a 4th place with Cagliari earns you an immediate spot in the club’s hall of fame, while getting a 4th place with Juventus earns you an immediate kick out the back door. Surely, thus, the quality of your individual players relative to the points you have amassed in the league should be weighed in when you’re being judged as a coach. Another important variable to be taken into consideration when judging a coach’s work is how strong the other teams in the league are. With an equivalent team, getting a 4th place in the MLS is certainly not the same as getting a 4th place in Serie A.

What we’re going to do, then, is to look at how Roma’s points per match ratio has been changing with Roma’s value relative to Serie A’s average value over the years. 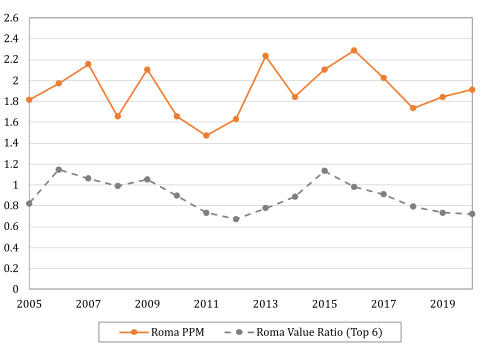 The graph shows Roma’s points per match ratio (PPM) since 2005 (which stands for 2005/2006 season) up to the current season (full line, orange) and Roma’s team value divided by the average top 6 team value for that year, in the same time period. All team values were as per transfermarkt.com. When we look at how Roma’s PPM has been changing with Roma’s relative team value, it shows, as you would expect, that how valuable your players are tells you a lot about how many points per match your team is expected to be racking up that season. From the graph we can see that only 6 times in the last 16 seasons has Roma’s PPM and investment compared to the rest of the league gone in different direction. For instance, in 2007/2008 despite Roma’s team value decreasing from 1.15 times the average top 6 team value to 1.06 times, the points per match ratio increased from 1.97 to 2.16. In 2014/2015 it was the only time when despite improvement in relative value (0.78->0.89) the points per match ratio decreased from (2.24->1.84). As you can see, in the two last seasons, 2019/2020 and 2020/2021 relative team value always decreased 0.79->0.73->0.72 but the PPM kept increasing 1.74->1.84->1.95, at least as things currently stand in the table (this was written 22 matches into the season). Thus, of the 5 times investment went down and PPM increased in the past 16 seasons, including the current one, 2 were under Fonseca. That’s pretty impressive if you ask me. Roma currently has a better PPM ratio than in the 2014/2015 season but with a team market value that is much weaker relative to the other top 6 teams in Serie A. In fact, this season’s PPM is about equal to the average of the past 16 seasons, but with the second lowest relative team value since 2005.

Before I finish, I wanted to go one step further in my efforts to develop a general way to indicate if a coach is overachieving or underachieving. It isn’t based exactly on the previous graph, but you can think of it as being akin to computing the difference between the PPM and the relative team market value (i.e. the orange line minus the silver line). The overachieving factor,

, shall then be defined as:

is the expected winning probability, and

is the expected drawing probability:

is the relative team market value difference and

is the sigmoid function.

is simply calculated as:

Now, the crucial part of having an overachieving factor that makes sense is figuring out a way to estimate

. I won’t go into too much detail, but it stems from the following assumptions: i) the expected winning probability follows a sigmoid shape with regards to the combined strength of a given team’s players, ii) the expected winning, losing and drawing probabilities are the same if that strength is exactly the same as the average league strength. Both assumptions are based on experience and seem reasonable. Again, I used team market value as a proxy for combined players strength. Those assumptions could be inaccurate since I didn’t actually go and tried to retrospectively confirm them with data from previous seasons. This is not a scientific study anyway, so my intuition will have to be good enough here. The overachieving factor

As you can see, Atalanta’s Gian Piero Gasperini and more recently Lazio’s Simone Inzaghi are the clear overachievers here (a shout out to Garcia in 2013/2014 too), with Inter and AC Milan coaches only recently living up to the potential of their team’s players. Again, following this estimate, Roma is being an overachiever in the past couple of seasons under Fonseca. Of course, you must consider the limitations of using team market value as a proxy for team strength. Older teams, for instance will likely be negatively biased, since potential makes up a large portion of a player’s market value. Still, this gives us a really nice impression of which coaches have made their team more than the sum of its players.

So there you have it, Fonseca seems to be in a positive trend and probably the fact that the league is more competitive this season and that his record against direct rivals is bad, is making many of us underrate him. The season is still underway and with a match against Milan this weekend I know this post will either age like fine wine or like a cup of fresh milk, no in-between.

Other fanposts by me:

Every Assist Totti Ever Made with Roma

A Tragic Day for Roma (and Football)