With the recent call up of Alessandro Florenzi and Federico Balzaretti, as well as the spectre of Francesco Totti, we take a look at what these Roma players have to offer for Italy in 2014.

Share All sharing options for: The Azzurri, Roma, and 2014.

Beyond simple relief and a sense of accomplishment, Italy's early qualification for Brazil 2014 affords Cesare Prandelli the opportunity to infuse some different faces into the Azzurri XI. For a side featuring an intriguing mix of veteran leadership and youthful exuberance, this will ensure that Prandelli, in the event of injury or suspension next summer, finds the right pieces to bridge that experience gap. For Roma, it touches upon an equally intriguing generational amalgam, as the Giallorossi feature three players who are, at once, the past, present and future of Gli Azzurri.

Naturally, then, the lure of the World Cup holds different meanings for each player. For the legend, a chance to rescue a nation, for the veteran seemingly always on the fringe, a chance to prove his mettle, and for the rookie, an opportunity to stake his claim for 2014 and beyond.

With that in mind, let's throw some wild speculation against the wall and see what sticks.

We'll have more to say on what he means to Roma in the not too distant future, but when we're talking about La Nazionale, the song remains the same. Florenzi, due to his pace and tactical awareness, is a boon to his manager's tactical predilections, as he can fill a variety of rolls with equal composure and cleverness.

Throughout Euro 2012, the 2013 Confederation's Cup, and 2014 World Cup Qualifying, Prandelli has utilized a variety of three, four and five man midfields. Given this range of tactical approaches, as far as Italy goes, Florenzi might very well be the new Simone Perrotta; doing all that goes unnoticed--tackling, hustling, passing, moving and switching--subverting his own acclaim for the glory of this teammates and his nation.

But, as we're seeing this year, Florenzi is a Perrotta for the next generation; possessing the work ethic and humility of his predecessor, but with a decidedly sharper eye for goal.

So where would young Alessandro fit into Prandelli's shape shifting ways?

Though he's tinkered a bit, Prandelli's fall back appears to be the 4-3-1-2, which, if true to recent form, will undoubtedly feature Daniele De Rossi and Andrea Pirlo, putting Claudio Marchisio dead center in Florenzi's cross hairs. With Florenzi's ascendency this season, this suddenly becomes a question worth discussing. But unseating Marchisio, who has increasingly become a fixture for Gli Azzurri the past 18 months, is no small task, particularly as Marchisio has, at least this season, exceled where Florenzi floundered; passing and playmaking.

To be fair, this is a product of their contrasting positions on the pitch, but Marchisio is no slouch, that's for sure. However, it is precisely because of his sudden flare for the dramatic that Florenzi's claim to an Azzurri spot is becoming hard to ignore...bringing us to our final point on Florenzi.

Like we said, this qualifying cushion offers Prandelli the chance to experiment. And experiment he has. If you ventured down to Coverciano this week--first of all, lucky you--you may have seen Cesare's boys toying with the trident. While the nominal starters in this configuration appear to be Mario Balotelli, Giuseppe Rossi and Antonio Candreva, Florenzi was thrown into the defacto B-team, alongside former Roma attackers Alessio Cerci and PDO himself, Pablo Osvaldo, where his pace and tactical awareness would be tremendous assets, not to mention sources of incredible personal frustration.

Whether or not this formation rears its head next summer is anyone's guess, but with Balotelli always a sour look away from being sent off, coupled with Rossi's injuries, PDO's prima donna ways, and Stephan El Shaarawy's slow start, Florenzi's best shot to make this squad next summer might be as a reserve forward.

So, take his nose for goal and combine it with his flexible skills and nearly unparalleled work ethic, and Florenzi's place in Prandelli's paradigm looks quite clear.

We all know what he does well and where he suffers, but if the season's first seven weeks have shown us anything, it's that a motivated and well-rested Balzaretti is a true two-way full back, except, you know, the crossing...that's still not good.

But, when one looks at Prandelli's left back selections during World Cup Qualifying, one won't find consistency. Everyone from Giorgio Chiellini, to Domenico Criscito, to Mattia De Sciglio and Balzaretti himself, has featured in this spot. So, in this sense, Prandelli's seeming ambivalence to the charges at his disposal might be Balza's best bet, particularly if he remains a key to Roma's resurrection this season. It may not be the best story, or one that fills you with optimism, but Balzaretti's place within the Azzurri is as much a testament to a lack of better alternatives as it is to the merits within the man.

However, should he earn Prandelli's confidence ahead of next summer's World Cup, Balzaretti's should assume his usual role; venture forward and get involved in the attack. Based on the early returns for Roma this season, he has the necessary skills to do the job. He may not be a world beater, but he may be the best Italy has to offer.

Should Francesco Totti Rejoin The Azzurri? 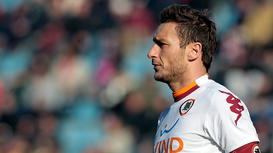 For a more in depth look at the pros and cons of Totti's possible return to Italy's National Team, take a look at our original analysis.

With only 15 caps to his name, half of which occurred in 2012 alone, Balzaretti has always been on the fringes of the national team. Indeed, were it not for injuries and suspensions to Ignazio Abate and Christian Maggio last summer, Balza may not have even appeared in Euro 2012; an opportunity he seized upon, however, propelling himself into his current role as Roma's unquestioned leader at leftback.

So, for Balzaretti, given his never quite secure place for club or country, his place in La Nazionale is a matter of pride, legacy, and simply a chance to prove that he belongs among his nation's elite.

As you can see above, we covered the prospect of Totti returning to the national fold in much greater depth last season, but as Brazil 2014 draws closer, we can take a more minute look at how exactly Er Pupone would fit within La Nazionale.

But what about the man calling the shots, what does he think?

Players with great talent like Francesco, like Parma's Antonio Cassano, are always under observation. We'll evaluate Totti a month before the World Cup. But a Totti like this is a player to talk about, to reflect upon, it is a fantastic Totti. If the World Cup was today then I would absolutely call him up, there is no doubt about that

Prandelli admitted that he hasn't yet broached the subject with Totti, but suggested that fitness is a paramount concern with any potential player. In order to assess Totti's fitness, Prandelli needn't look any further than his own backyard; Francesco has positively eviscerated Serie A every year since he left the international game. At 37 years old, Totti is among the league's top ten players thus far, leading the pack in assists and chances created, while scoring three goals through the first seven matches. Last season was no different either, as Totti was among a handful of players across Europe to achieve a double-double in goals and assists, while his 2,800 minutes paced his club.

Simply put, excellence and endurance are not areas in which Francesco Totti falters, even at age 37.

But where would this Totti fit within this Gli Azzurri?

Well, much like Florenzi (or anyone for that matter, I suppose) where he fits is a matter of Prandelli's tactical choices. For the sake of argument, let's say Prandelli throws him right back into the fray, running Totti out there for 90 minutes the minute they land in Rio. Totti, coupled with Andrea Pirlo and Daniele De Rossi, gives Italy an unparalleled level of international experience and leadership. But, even if he were to subject Totti's legs to that level of abuse after a long Serie A season, where exactly would he fit?

Totti is immortal as a player. In this form, he could make a difference everywhere   -Gigi Buffon

On this Azzurri, it's pretty simple. Pack your bags, Riccardo Montolivo, there's a sweet spot on the bench reserved just for you. Assuming Prandelli drops the 4-3-1-2 on the world's collective ass next summer, Totti is assuredly an upgrade over Montolivo and Thiago Motta. And, as his numbers this season prove, Totti's play making has not yet been blunted by the advances of aging. So, whether you'd classify him as a trequartista or a false nine, Totti's vision and creativity in the attacking third would be the perfect complement to Pirlo's mastery from deep, and would keep the Italian offense flowing ceaselessly from back-to-front.

Besides, can you even imagine Totti feeding Balotelli, Rossi, El Sharaawy or, dare I even say it, Antonio Cassano? It's almost too much to bear.

Of course, at 37 and-a-half next summer, and with a fresh two year contract extension under his belt (not to mention Silvio Piola's scoring mark within reach), can he be counted for anywhere near 90 minutes, or would he be best utilized as second half shot in the arm?

It's too soon to tell, and most likely an academic matter, but this Totti, no matter where you place him or how often he features, is an asset which no other nation possesses.

As Roma fans, we've enjoyed many a victory thanks to this saving grace. While he may not catch Piola and he may not be around to break the club's new ground, rescuing his nation and winning his second World Cup, eight years apart, no less, would be the perfect jewel to add to Totti's crown as the king of the sport.

With DDR firmly entrenched in Italy's starting XI, the inclusion of Totti, Balzaretti and Florenzi could give the Azzurri a distinctly Roman feel next summer, which, as we're seeing, is a good thing.