With less than 60 days before their World Cup campaign kicks off, we take a look at Prandelli's choices at the back. Here's a hint, its laden with Old Ladies.

With less than two months before the World Cup kicks off, we can expect a deluge of news about injuries, breakout players, snubs, and the usual human interest pieces. However, at this stage in the game, it's all about squad selections. Last week, Cesare Prandelli disclosed a list of his first 42-test subjects, who convened earlier this week to undergo the first battery of testing and conditioning prior to Italy's clash with England on June 14th in Manaus.

We'll start where Italy is the strongest, at the back. Throughout qualification, Prandelli's posse managed to keep a +10 goal differential, showing the world that Italy was as stout as ever in defense. Given their impressive performance at Euro 2012, where they only allowed two goals in group play, we can expect a lot of holdover from Prandelli's first three seasons on the job.

So, with a few days before Roma takes on Fiorentina, let's take a look at the men filling Cannavaro's shoes this summer. 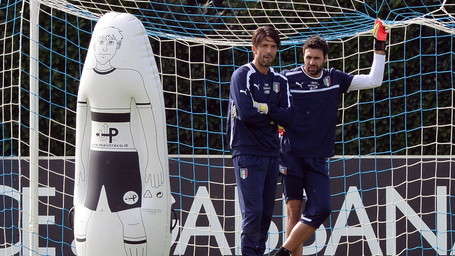 There's no mystery here, when you have one of the greatest goalkeepers of all-time, even at age 36, you're pretty much set between the sticks. Buffon is not only Italy's all-time leader in international caps, but with 18 cleansheets and a goal allowed every 139 minutes (both second to MDS), he is still one of the best keepers in Italy, if not the world.

So, now that our very own Morgan De Sanctis has stowed away his international gloves, the only lingering question is which two men will join Gianluigi Buffon on the jet to Brazil.

At age 30 and with a dozen clean sheets to his name, one has to imagine Antonio Mirante might get first crack as Buffon's understudy. After all, if Gigi were to go down, it might behoove Prandelli to have an experienced and effective keeper on hand, and Mirante certainly fits that bill.

Beyond him, the remaining names are all incredibly young but bursting with promise, particularly Mattia Perin, who has nine clean sheets to his name; pretty impressive for a 21-year-old on a 13th place club. Speaking of impressive youth, the mere fact that Scuffet has earned regular minutes as a 17-year-old keeper is an argument in and of itself, but he's turned a lot of heads lately, including his presumed idol, Buffon, who has sang Scuffet's praises.

We don't know the extent to which a player's location factored into this list of 42, but with no foreign based players selected, it certainly seems to have swayed his decision making. However, when we talk about Non-Buffon Italian keepers, the first name on everyone's lips is usually Salvatore Sirigu, PSG's 27-year-old keeper and Buffon's presumed heir.

Beyond his place of employment, this one is sort of hard to pin down. Sirigu has made 46 appearances across all competitions for PSG, keeping 21 cleansheets along the way, so performance is clearly not an issue. So, if Prandelli does indeed expand his selection pool beyond the domestic league, Sirigu should be the top choice, but he should have at least two more World Cup cycles in his career, right?

As we just mentioned, the most intriguing name on this list is the youngest one, Scuffet. It's hard to fathom an adolescent keeper performing as well as he has, but Scuffet is certainly making a name for himself. Italy will never want for goalkeepers, that's for sure, so when we look ahead to 2018, 2022 and beyond, the competition between Scuffet, Perin and Sirigu should be intense.

Assuming he limits himself to this initial list of five keepers, I'd bet on Prandelli sticking with Buffon for obvious reasons, tabbing Mirante as his experienced security blanket and whetting Scuffet's appetite for the future. However, barring any injuries, Buffon should prove once more that he is a cut above the rest. 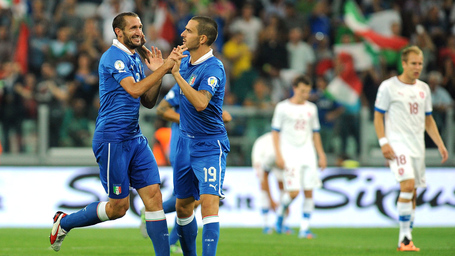 In case you missed it, Juventus has dominated Serie A the past 36 months, and beyond Buffon, much of that success has been predicated on the performance of Leonardo Bonucci, Andrea Barzagli and Giorgio Chiellini, each of whom has been key in Juve's stranglehold on the league the past three seasons. Juventus has owned the ‘10s and shows no signs of abating, thanks in large part to their impressive defense. So, if you want to see Prandellis' workhorses this summer, look no further, particularly if Prandelli follows Antonio Conte's suit and opts for a three man backline featuring those very same Old Ladies.

However, if his tactical choices during the Confederations Cup were any indication of his intentions this summer, chances are Chiellini and Barzagli will be flanked by Ignazio Abate and Mattia De Sciglio.

Really, it's that simple, though some new names have been thrown into the mix throughout qualification, Italy's back line is very much a joint production between Juventus and AC Milan. So I wouldn't expect much revolution on that front, with the possible exception of Christian Maggio earning some significant minutes should either of the Milan fullbacks falter.

Choosing purely from this list, and assuming Prandelli brings along the standard seven defenders, the smart money would be on Davide Astori, Manuel Pasqual and Andrea Ranocchia, the latter pairing having featured in recent friendlies. Ranocchia can provide cover for any of the Juve trio, while Pasqual provides additional flexibility with his ability to move into the midfield. Besides, if you're going to suspend Mattia Destro, you better damn well bring Astori, the man he slapped in the first place. It's only right.

With the three boys from Juve taking up the central duties, the main areas of intrigue rest on the flanks, where the likes of Christian Maggio and Domenico Criscito have featured throughout Prandelli's four year tenure. However, if it comes down to one, bet on Maggio's age and experience.

In terms of the intriguing names, look no further than the Italo-Argentine, Gabriel Paletta, who has certainly turned some heads at Parma as of late and would be a prime candidate to carry on the Azzurri's lineage of Oriundi talent. If we want to throw out an extreme long shot, one not included on this list, how bout Luca Antei? The Roma product has been among the league leaders in tackles and interceptions all season, so he's as deserving as any other darkhorse candidate.

Formations aside, the Juventus trio of Barzagli, Bonucci and Chiellini should shoulder much of the burden, while my money is on De Sciglio, Abate, Maggio and Astori to round out the defensive ranks. These seven men have the experience and trust of Prandelli, so there shouldn't be any surprise inclusions, barring injury or ethical transgressions, of course.

Italy, as always, should be among the best defensive sides in this competition, with the only wrinkle of concern being conditioning, as the Juventus trio have logged some pretty significant minutes the past few seasons. While the Azzurri's fullbacks aren't among the world's best, they're solid enough in all aspects of the game that won't put any undue pressure on their teammates.

Ultimately, when you're thrown into a group that might feature goal scoring threats like Luis Suarez, Edinson Cavani, Wayne Rooney, and Daniel Sturridge, among others, your defense will be pushed to the brink. However, with the age and international experience at his disposal, Prandelli should be up to the task.